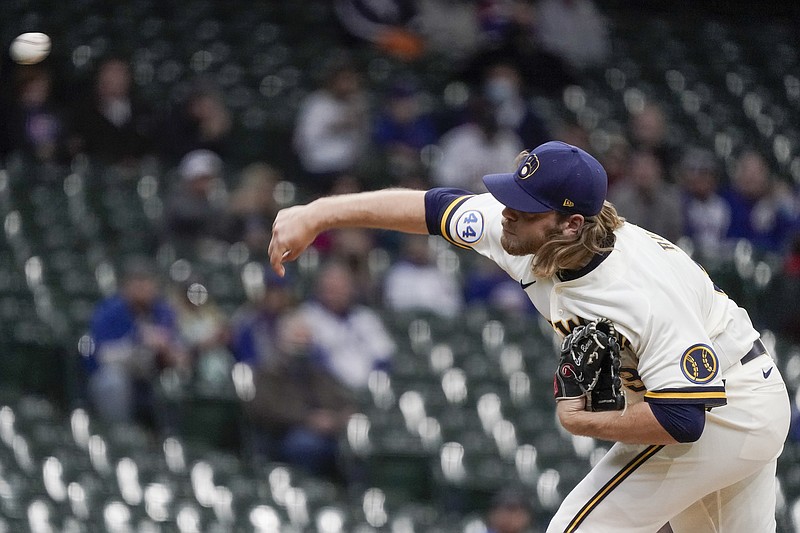 MILWAUKEE -- Corbin Burnes always sensed the Milwaukee Brewers were on the verge of producing an exceptional starting rotation.

It just took some time to put it all together.

Burnes now is the hottest pitcher in a rotation that has produced a remarkable run of consistency in the first two weeks of the season. Brewers starters have worked at least five innings while allowing no more than one run in eight consecutive games, the longest such streak in franchise history.

During that stretch, Brewers starters have allowed a total of three earned runs over 46 innings, and opposing batters have hit just .136 against them.

"It's just knowing what we've got," Burnes said. "It's taken some of us a little bit longer than others to bring everything to the top, but we've seen it for a long time, having come up together and playing in the minor leagues. The first couple of years in the big leagues, you see glimpses of it and know it's just a matter of time before we'd all put it all together."

Burnes has led the way.

The 26-year-old right-hander threw six shutout innings Wednesday in a 7-0 victory over the Chicago Cubs to continue his torrid start. Burnes has recorded 30 strikeouts while allowing just 4 hits, 1 run and no walks through 181/3 innings.

But the Brewers' other starters also have been impressive.

Brandon Woodruff owns a 2.12 ERA and carried a no-hitter into the seventh inning in one of his three starts. Freddy Peralta has a 0.69 ERA with 24 strikeouts in 13 innings. Adrian Houser has a 1.80 ERA. Brett Anderson has a 4.50 ERA but allowed just one run over five innings in his last start.

"It feels great when you make that kind of progress in the rotation," Peralta said. "You feel like you have something to follow. It's like, 'My guy did this and we won the game, so I have to do the same today and give my best.' We are like family. We've been together."

Anderson is the only Brewers starting pitcher who didn't make his major league debut with Milwaukee. The Brewers drafted Burnes and Woodruff. They acquired Houser from Houston and Peralta from Seattle in 2015 when both were in the minors.

Houser is showing encouraging signs after finishing 1-6 with a 5.30 ERA last year. Peralta earned the nickname "Fastball Freddy" for his reliance on that pitch but has thrived since diversifying his repertoire.

"When I'm pitching, I feel I have more room, more space where I can go," Peralta said. "It's different. Before, I remember [having] just the fastball and the curveball. I never used the changeup. Now, I can use the changeup. I can go up. I can go down, away. I can use my slider and my curveball still."

The homegrown Brewers say they also have benefited from the counsel of the 33-year-old Anderson, who arrived in Milwaukee last season.

"Brett is kind of the guy everyone looks toward as far as how we go about our business, where we should be at certain times of the day," Burnes said. "He's been around this game for a long time and been in the big leagues for a long time, so he's a guy I stick to a lot, just to talk to and pick his brain a lot."

Milwaukee has needed its rotation in top form to overcome shortcomings in other areas.

The Brewers are hitting just .204 as a team. The bullpen couldn't hold a seventh-inning lead in a defeat at St. Louis last week or an eighth-inning advantage in a loss to the Cubs on Tuesday.

Yet the Brewers still have won each of their last three series thanks to their starting pitching.

"We thought this would be a strength and they're showing us right away that it is," Manager Craig Counsell said. "There's going to be times in the season when we have to pick them up, without question. But we also know there will be times we can lean on them, like we thought we'd have to. They're going to be able to carry the load." 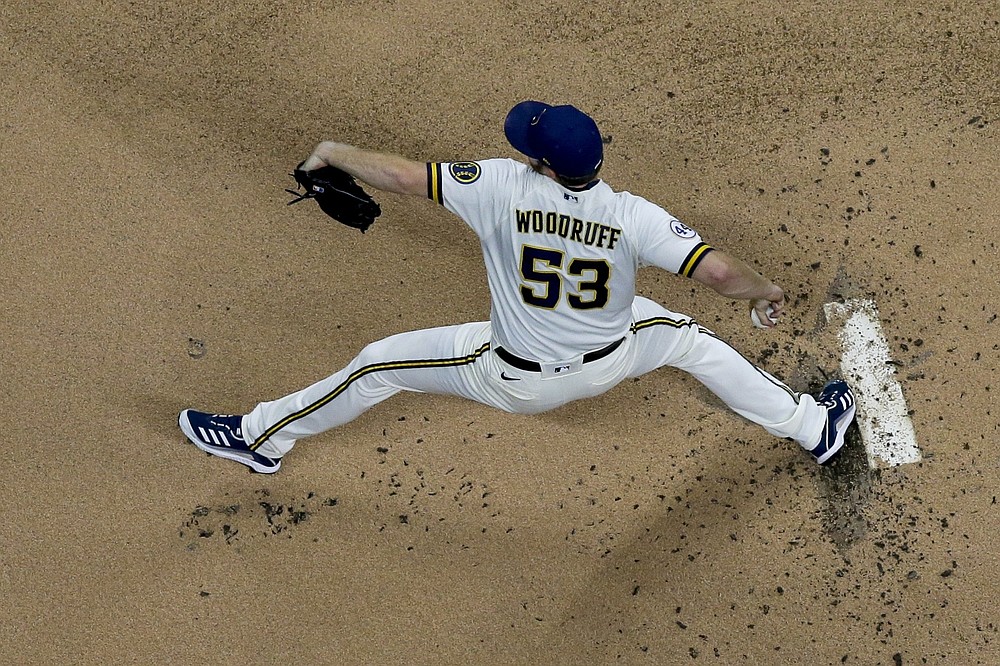 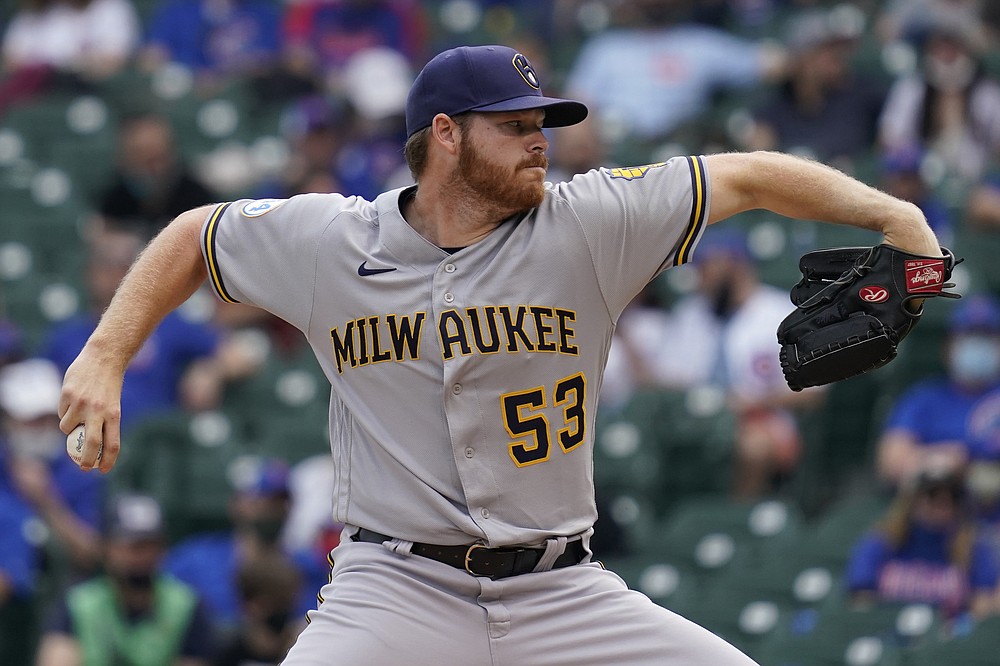 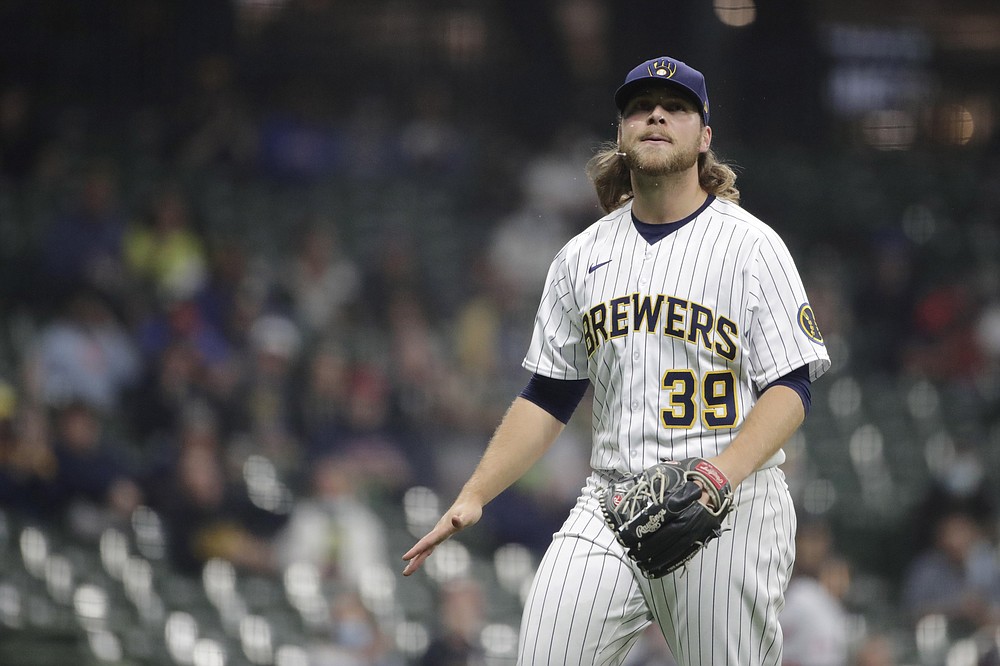 Milwaukee Brewers' Corbin Burnes reacts after striking out a batter during the sixth inning of a baseball game against the Minnesota Twins, Saturday, April 3, 2021, in Milwaukee. (AP Photo/Aaron Gash) 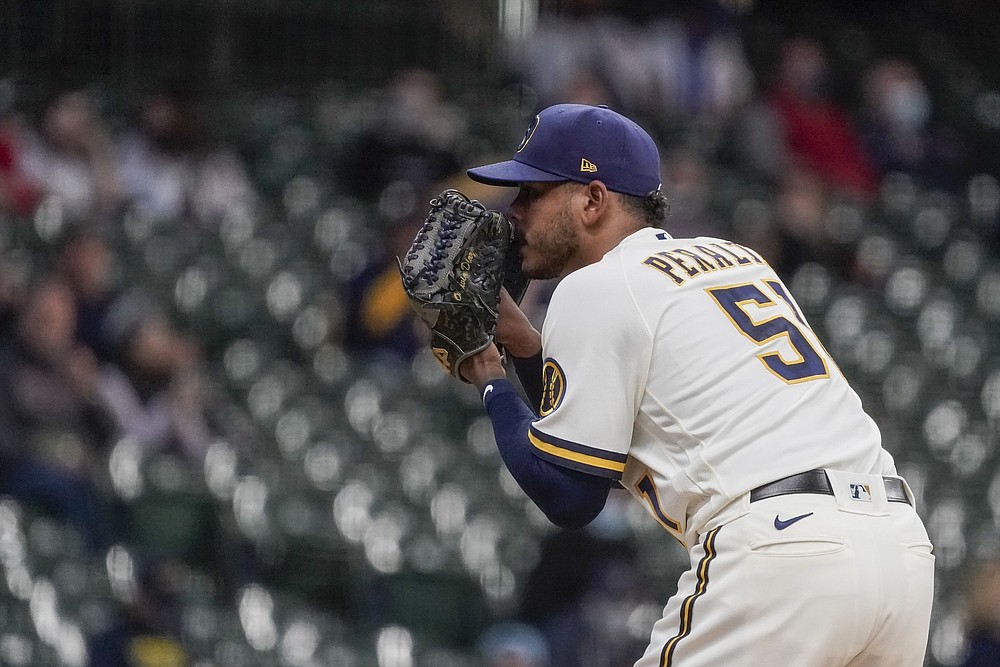 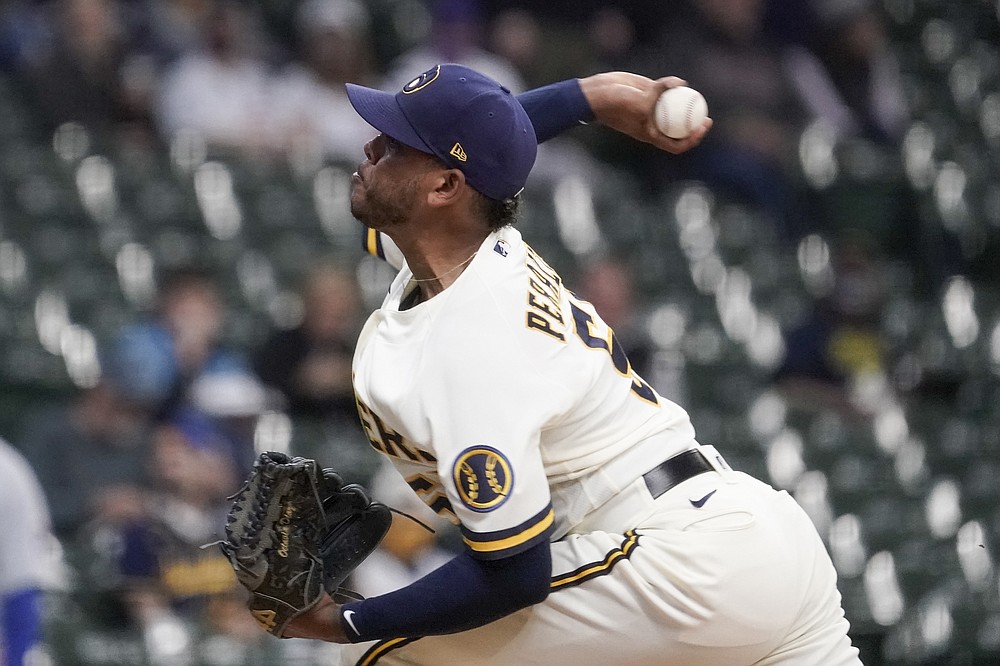 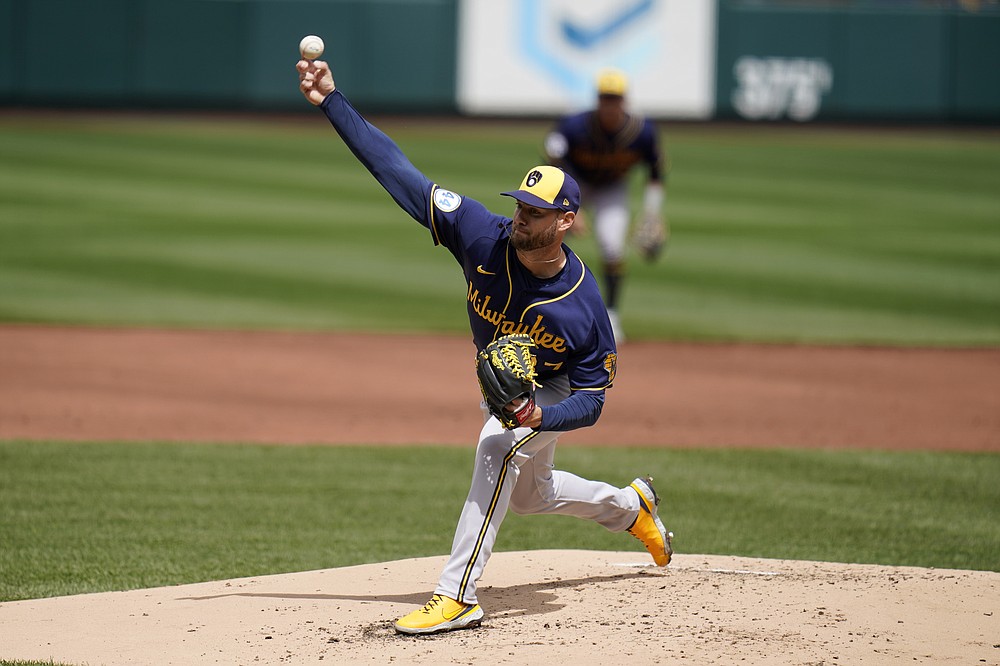 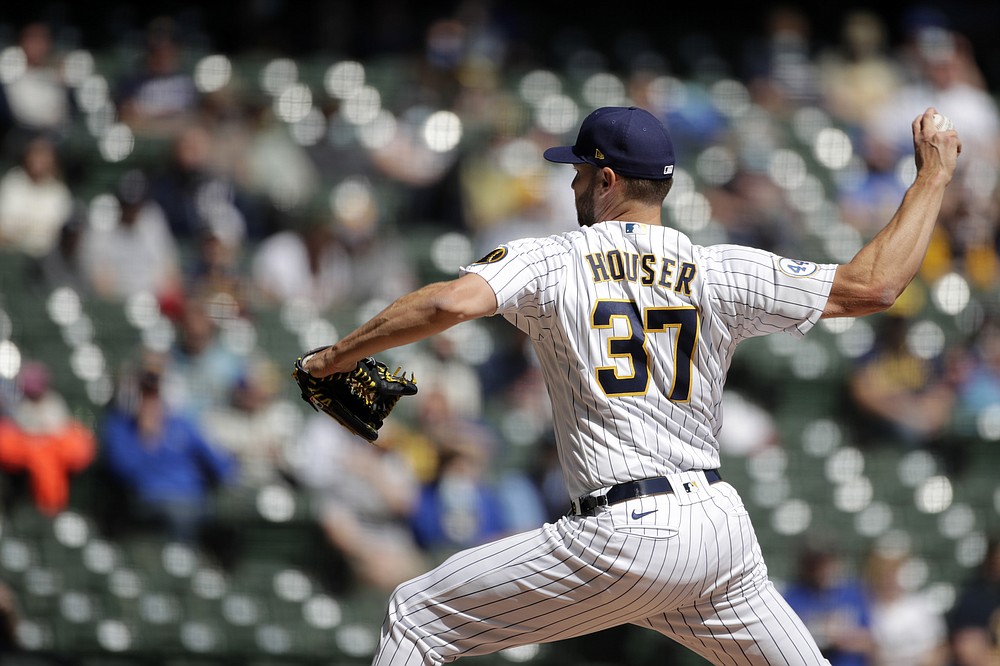 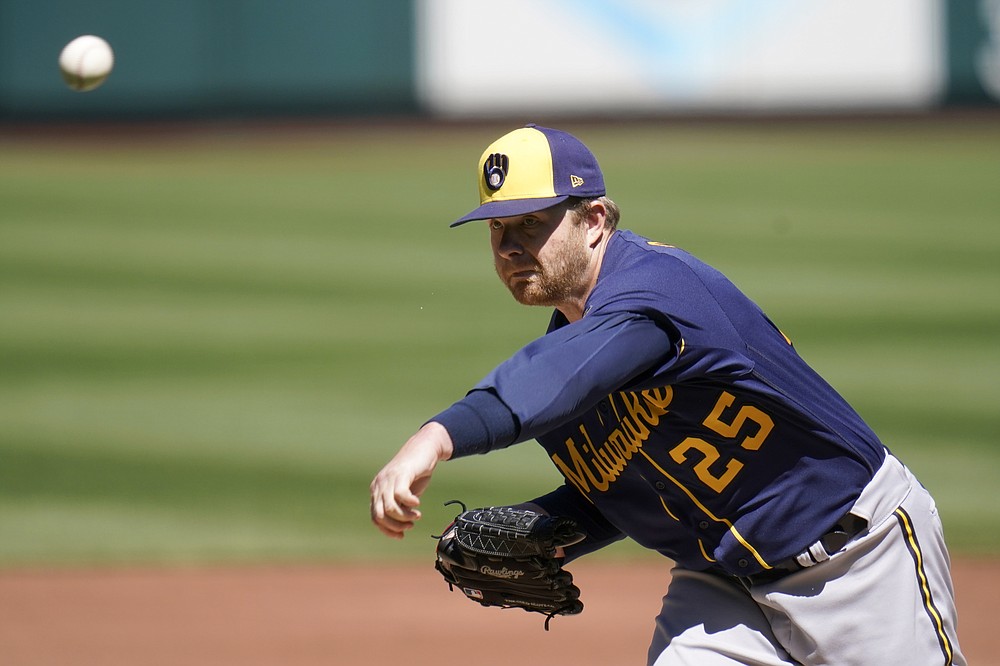