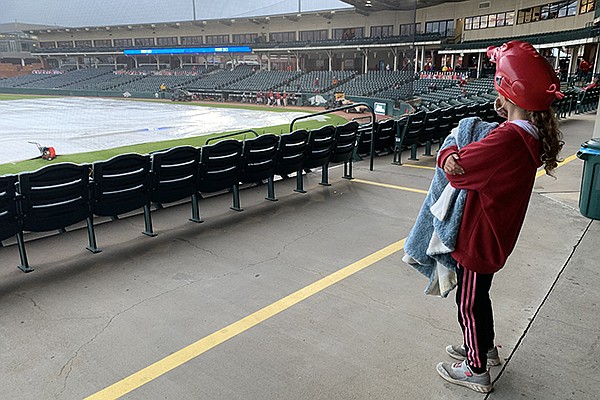 An Arkansas baseball fan looks on during a rain delay between Arkansas and Texas A&M on Friday, April 16, 2021, in Fayetteville.

FAYETTEVILLE — For the second consecutive week, a rainout will force Arkansas into 18 innings of Saturday baseball.

The No. 1 Razorbacks and Texas A&M are scheduled to play a doubleheader Saturday beginning at 1 p.m. at Baum-Walker Stadium. The second game of the doubleheader will begin approximately one hour after the conclusion of the first game.

The series opener was postponed Friday due to poor field conditions caused by rain that fell throughout the day in Fayetteville. The start time was delayed by one hour Friday afternoon, then postponed at around 7 p.m.

Arkansas (28-5, 9-3 SEC) played a doubleheader at Ole Miss last Saturday. The Razorbacks won the first game 7-3, but lost in the second game 13-6. It was the team’s first doubleheader of the season.

Both teams should be rested for Saturday’s games. The Aggies have not played since an 8-4 victory at Texas State on Tuesday.

Arkansas was the only SEC team to play two midweek games this week, but was able to rest several starters for most of at least one game against Arkansas-Pine Bluff. The Razorbacks defeated UAPB by scores of 12-4 in nine innings Tuesday and 26-1 in seven innings due to run rule Wednesday.

“I think (the rest) helps, especially with certain guys,” Arkansas coach Dave Van Horn said Wednesday. “Some positions are more demanding than others. Some guys just need to have a day so they can sit and watch, and slow the game down a little bit.

“I think it’s good to take a day off here and there, especially in the middle of the season. The big part of the season is coming up and we need some guys to be fresh going down the stretch.”

The doubleheader will be played at the same time as Arkansas’ spring football game at Reynolds Razorback Stadium, which is scheduled to begin at 2 p.m.