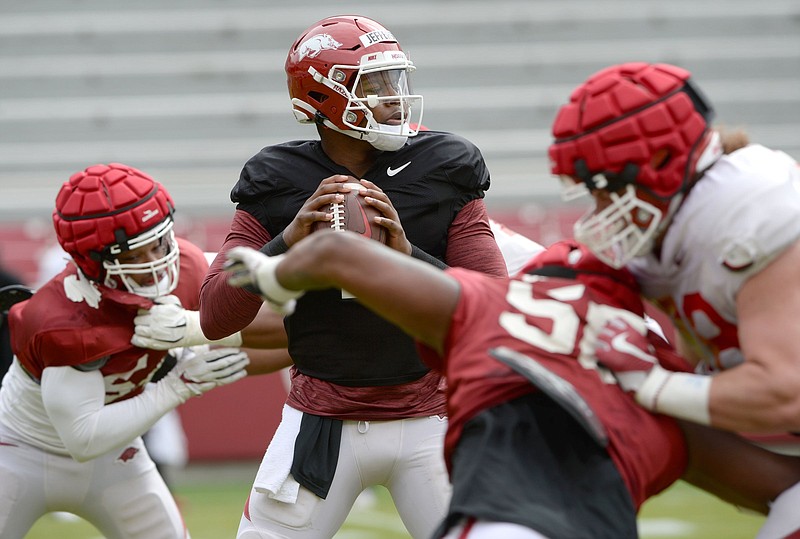 KJ Jefferson (shown) will lead the first-team offense on the white team against safety Jalen Catalon (right) and the first-string defense on the red team during today’s Red-White Game at Reynolds Razorback Stadium in Fayetteville. (NWA Democrat-Gazette/Andy Shupe)

FAYETTEVILLE -- It took 495 days after he was hired, but today Coach Sam Pittman will conduct his first Red-White Game at the University of Arkansas.

The 2 p.m. game will take place at Reynolds Razorback Stadium and stream on the internet with SEC Network-Plus.

The first-team offense, led by sophomore quarterback KJ Jefferson, will don white and be paired with the second unit on defense. The top defense will wear red and largely will be matched against the offensive starters.

"I don't know how we're going to continue to get better if we don't go good on good," Pittman said. "So we'll go ones vs. ones."

Pittman anticipates running between 50 and 55 plays apiece for the top two offenses, plus nontackling special-teams plays, to compact into the 120 minutes.

Jefferson will work behind an offensive line that returns all five starters. However, sophomore Marcus Henderson is expected to start at right tackle, where Dalton Wagner will be held out due to injury. Luke Jones and Brady Latham are engaged in a battle at left guard.

On the other side of the ball, linebacker Grant Morgan and safety Jalen Catalon lead a first-unit defense that has as many as 10 starters back.

Pittman and the Razorbacks surprised most analysts by compiling a 3-7 record against an All-SEC schedule, breaking a 20-game conference losing streak with a 21-14 win at Mississippi State in Week 2. That start came without the benefit of spring drills for a first-year coaching staff.

"I just think it was a mentality," senior offensive tackle Myron Cunningham said. "We didn't have that spring ball so we knew -- especially coming out with the hardest schedule last year and playing Georgia Game 1 -- that it wasn't like playing some team of the same caliber.

"But we knew playing Georgia that you have to come and bring your A-game. You don't want to get embarrassed out there. We sure brought our A-game, and that's all it is, we're just fighters."

Pittman and his staff went into the 15 practices of spring with some clear-cut goals:

• Become more physical on both sides of the line.

• Develop greater depth across the board.

• Improve fundamentals and technique at all positions.

In recent interviews, Pittman and a variety of players have spoken about making strides in those departments.

Junior defensive end Zach Williams, a Joe T. Robinson product and legacy talent, was asked about the value of this set of spring drills compared to the loss of last year's.

"Very, very valuable," Williams said. "I feel us getting better and better. You can't go all those months without football and then expect to be great after one month of fall camp.

"You have to have hard work in between. I feel like we've been taking these practices and we've been actually using them to our advantage."

Williams and Eric Gregory have been running at first-team defensive end, with new defensive line coach Jermial Ashley rotating Dorian Gerald and Jashaud Stewart in with the first defense on occasion.

Williams, who has gotten his weight up to 265 pounds, has a goal for the spring game.

"I want to make a statement how much better I've gotten from last year," he said. "I want to show people that I've actually gained weight, and I'm starting to get better with my technique. And collectively, I just want to actually show people that we've been working over these past three weeks and that the thing from last year was great but it has no comparisons with what they are going to see this upcoming season."

Junior center Ricky Stromberg said he wanted the offensive front to show what position coach Brad Davis has been preaching all spring.

As for today's game, Stromberg said he wants the Razorbacks to "just put on a show for the fans and let them enjoy it." 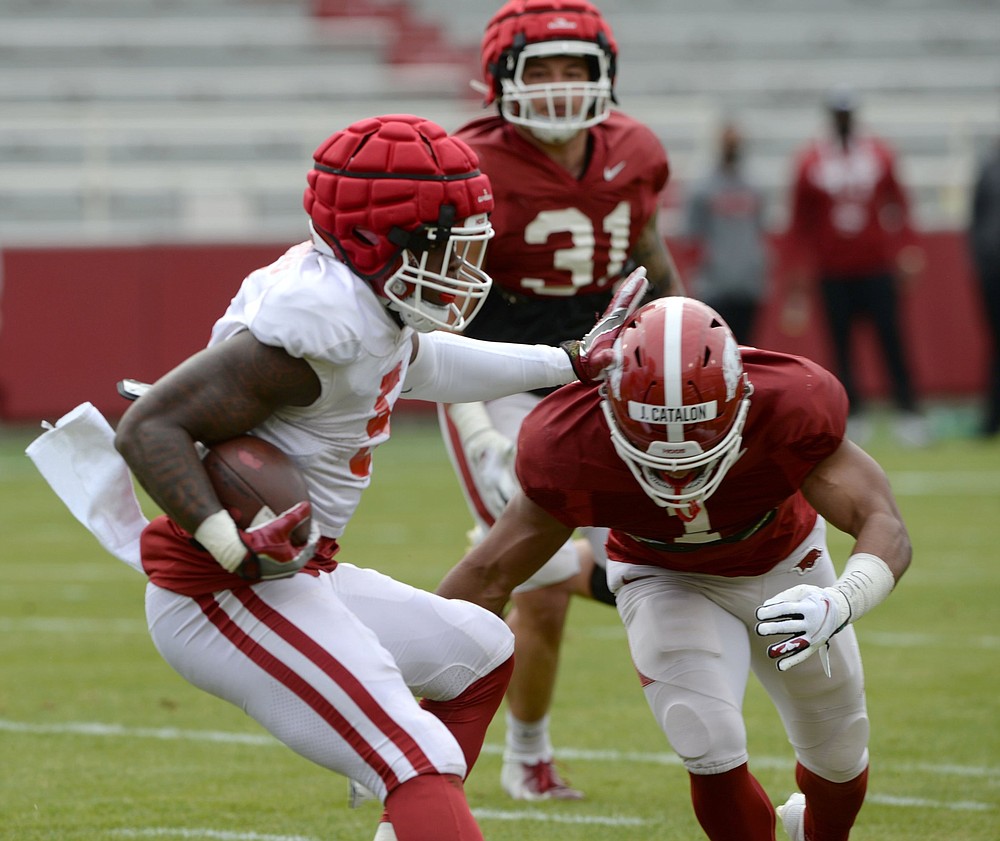 KJ Jefferson will lead the first-team offense on the white team against safety Jalen Catalon (shown) and the first-string defense on the red team during today’s Red-White Game at Reynolds Razorback Stadium in Fayetteville. (NWA Democrat-Gazette/Andy Shupe) 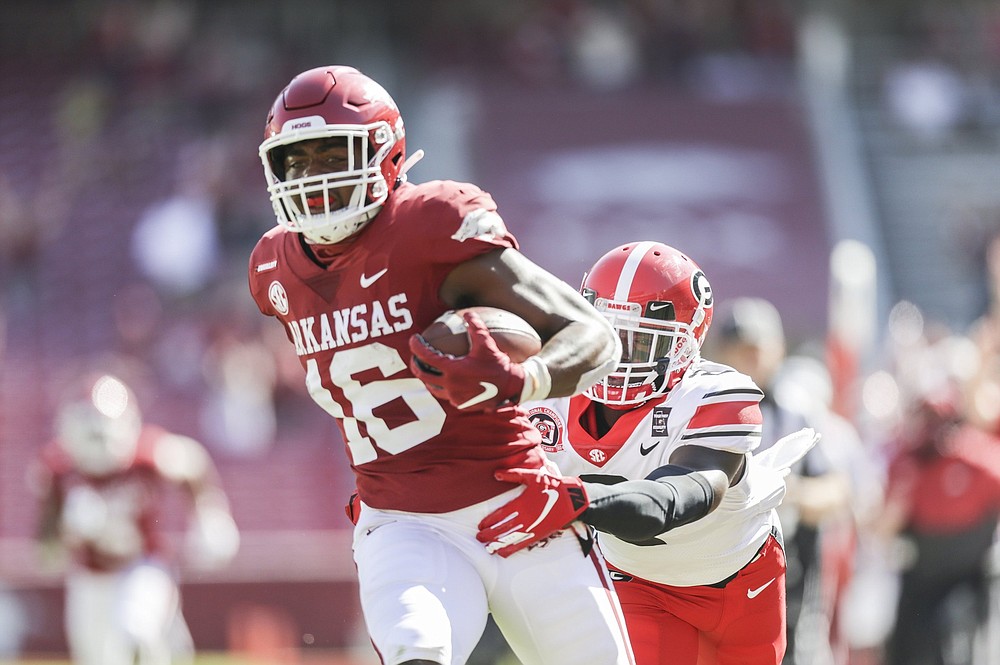 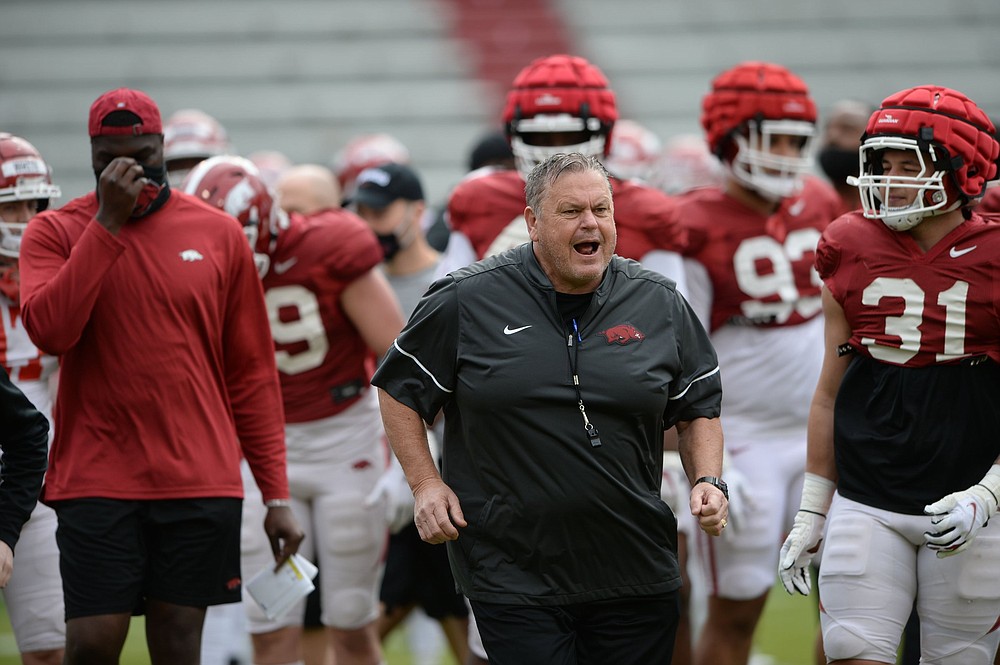