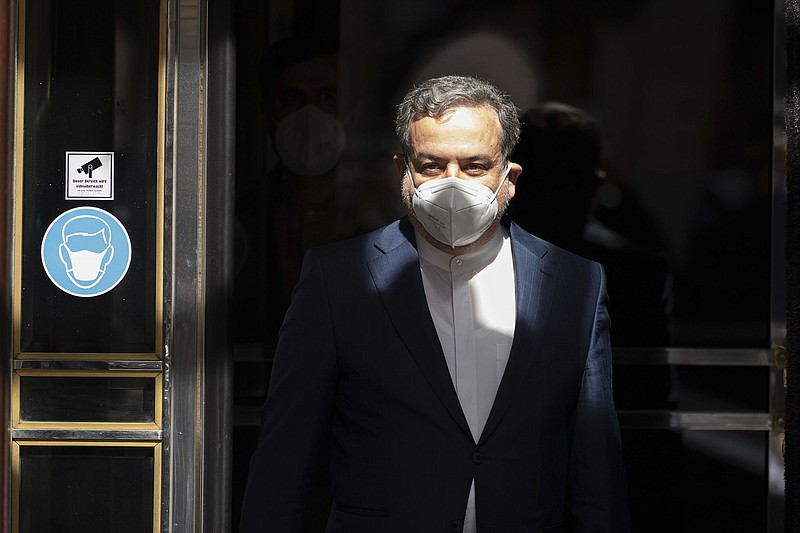 Abbas Araghchi, Iran’s lead nuclear negotiator, leaves the hotel Thursday in Vienna where talks are taking place. Araghchi told Iran’s Press TV on Thursday that the talks remained “on a good track, although we had the negative impacts of the last days’ developments.” The United States and its European allies warned that Iran’s announcement Friday that “young and pious Iranian scientists were able to obtain a 60% uranium product” would complicate efforts to revive the nuclear deal. (AP/Florian Schroetter, File)

ISTANBUL -- Iran's parliament speaker said Friday that Tehran has successfully enriched uranium to 60% purity, its highest level yet, in a move that the United States and its European allies warned would complicate efforts to revive the nuclear deal between Iran and world powers.

The move drew a rebuke from President Joe Biden, though he said negotiations were continuing.

In a Twitter message, Mohammed Bagher Ghalibaf, the parliament speaker, said that at 12:40 a.m. Friday, "young and pious Iranian scientists were able to obtain a 60% uranium product."

"I congratulate the brave people of Islamic Republic of Iran on this success," he said. "The will of the Iranian people is miraculous and will thwart any conspiracy."

Ali Akbar Salehi, head of Iran's nuclear energy agency, later confirmed that 60% enrichment was underway at the Natanz nuclear facility and cited output of 9 grams per hour, though he said that would drop to 5 grams an hour in the coming days, according to Iranian news agencies.

"Any enrichment level that we desire is in our reach at the moment, and we can do it at any time we want," Salehi said.

Still, the narrow scope of the new enrichment provides Iran with a way to quickly deescalate if it chooses, experts say -- but time is narrowing. An Iranian presidential election looms in June, and Tehran has threatened to further impede International Atomic Energy Agency inspections and potentially destroy video recordings of its facilities.

Meanwhile, it continues to use advanced centrifuges and gain know-how in high enrichment, something that worries nonproliferation experts.

"Because the deal has started to unravel, Iran has begun to acquire more knowledge about how to operate more advanced machines," said Daryl Kimball, executive director of the Washington-based Arms Control Association. "This particular operation, enriching to 60%, is going to give it even more information."

Borrowing a term used to describe diluting high-enriched uranium, Kimball added: "That knowledge cannot be down-blended. It cannot be reversed."

Iran's government had vowed earlier in the week that it would increase enrichment from its top level of 20% in what officials cast as retaliation for a suspected Israeli attack Sunday on the Natanz facility in central Iran, its main enrichment site. The announcement seemed to add a new obstacle to the multilateral negotiations underway in Vienna aimed at restoring the 2015 nuclear deal between Iran and six world powers.

The International Atomic Energy Agency, which monitors Iran's nuclear program, did not respond to a request for comment. This week it sent its inspectors to Natanz and confirmed that Iran was preparing to begin 60% enrichment at an aboveground facility at the site.

An annual U.S. intelligence report released Tuesday maintained the American assessment that "Iran is not currently undertaking the key nuclear weapons-development activities that we judge would be necessary to produce a nuclear device."

The 2015 nuclear deal, which former President Donald Trump unilaterally withdrew the U.S. from in 2018, prevented Iran from stockpiling enough high-enriched uranium to be able to pursue a nuclear weapon if it chose in exchange for the lifting of economic sanctions.

Tehran began breaching the terms of the deal after the U.S. withdrawal. In January, Iran began enriching uranium from the 3.67 concentration allowed under the deal to 20% -- a step closer to the 90% required for the fissile material in a nuclear weapon.

Iran insists its nuclear program is peaceful, though the West and the international agency say Tehran had an organized military nuclear program up until the end of 2003.

Iran has said it could use uranium enriched up to 60% for nuclear-powered ships. However, the Islamic Republic currently has no such ships in its navy.

Biden said Friday that Tehran's latest step was contrary to the 2015 deal. "We do not support and do not think it's at all helpful," he said. But he added that the Vienna talks had not been sidetracked.

"We are nonetheless pleased that Iran has agreed to continue to engage in indirect discussions with us on how we move forward and what is needed to get back" into the deal, Biden said. "It's premature to make a judgment as to what the outcome will be, but we're still talking."

Abbas Araghchi, Iran's lead negotiator, said in an interview with Iran's Press TV on Thursday that the talks remained "on a good track, although we had the negative impacts of the last days' developments."

His delegation is seeking a repeal of the sanctions that were reimposed by the Trump administration after it withdrew from the deal -- as well as more than 1,500 new sanctions that Trump imposed -- in return for Tehran's agreement to resume compliance with the accord.

In Vienna, working groups were convened to conduct the difficult work of outlining "concrete, specific measures" to be taken by Iran and the United States to move forward, Araghchi said. "If there is good faith on the U.S. side," he said, "the way is quite clear."

The threat of higher enrichment by Iran already had drawn criticism from the U.S. and three European nations in the deal -- France, Germany and the United Kingdom. On Friday, European Union spokesman Peter Stano called Iran's decision "a very worrisome development."

"There is no credible explanation or civilian justification for such an action on the side of Iran," Stano said. The Vienna talks aim to "make sure that we go back from such steps that bring Iran further away from delivering on its commitments and obligations."

After talks Thursday, Chinese negotiator Wang Qun called for doing "away with all disruptive factors by moving forward as swiftly as we can on the work of negotiations, especially by zeroing in on sanction lifting."

Meanwhile, Israel's foreign minister said Friday that his country was determined to stop Iran from building a nuclear weapon.

"We will do whatever it takes to prevent the extremists (in Iran) from succeeding, and definitely will prevent this regime from having a nuclear weapon," Israeli Foreign Minister Gabi Ashkenazi told reporters on a visit to Cyprus.

"Israel is determined to defend itself against any attempt to harm its sovereignty or citizens, and will do whatever it takes to prevent this radical and anti-Semitic regime from acquiring nuclear weapons," Ashkenazi said.

Israel, which has twice bombed Mideast countries to stop their nuclear programs and is suspected of carrying out Sunday's sabotage at Natanz, could act again amid a long-running shadow war between the Middle East rivals. It plans to hold a meeting of its top security officials Sunday over the Iranian announcement.

Israel has not commented on the Natanz attack, which Iran said damaged centrifuges and caused a fire.

The attack was initially described only as a blackout in the electrical grid feeding both its aboveground workshops and underground enrichment halls -- but later Iranian officials began calling it an attack.

Alireza Zakani, the hard-line head of the Iranian parliament's research center, referred to "several thousand centrifuges damaged and destroyed" in a state TV interview. However, no other official has offered that figure, and no images of the aftermath have been released.

In Cyprus, Askenazi met with the foreign ministers of Cyprus and Greece, Nikos Christodoulides and Nikos Dendias, as well as Anwar Gargash, a top presidential aide in the United Arab Emirates.

Israel and the UAE normalized relations in a landmark deal last year, and the four countries represented at the meeting Friday promised to boost cooperation in defense, energy, tourism and other sectors.

Information for this article was contributed by Kareem Fahim of The Washington Post; and by Jon Gambrell, Nasser Karimi, Fares Akram, Samuel Petrequin, David Rising and Frank Jordans of The Associated Press.