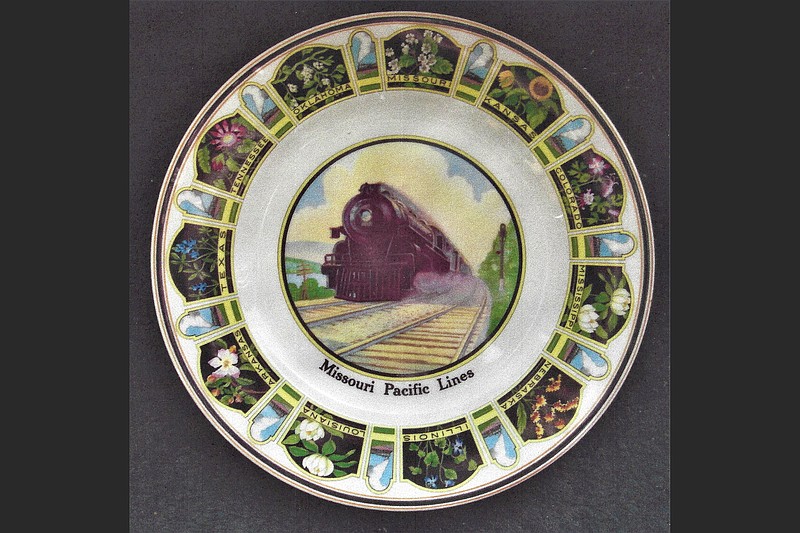 Plates like this came with either floral borders or ones featuring state Capitols. (Handout/TNS)

DEAR HELAINE AND JOE: Attached is a photograph of a Missouri Pacific Lines china dinner plate. It is marked "O.P. Co. Syracuse China." It is in excellent condition with vivid color. Any information would be appreciated.

DEAR M.B.: We cannot help but picture Judy Garland slinging hash in the 1946 movie "The Harvey Girls." The reality of railroad travel in the early to mid-19th century has been greatly romanticized on film — early journeys might have included no restrooms and no place to get a decent meal.

In the early days, railroad meals, such as they were, often consisted of rancid meat, cold beans and stale coffee. Food service was limited to "roadhouses" near where the trains stopped for water.

There are stories that the meals were so bad that sometimes there was a collusion between the train's conductor and the roadhouse food provider that had the conductor call "all aboard!" before the food could actually be eaten.

Things began to change, however, after the American Civil War, when George Pullman built his first railroad dining car in 1868. Fred Harvey's founding of the Harvey House chain of restaurants and hotels in the late 1870s also raised the level of food service along the American railroad system (essentially west of the Mississippi River).

The Missouri Pacific Line (or MoPac, as it is sometimes called) was founded in 1872 and went out of business in 1997. The plate in today's question appears either to be a dinner plate or perhaps a 10 ½-inch diameter service or "place" plate used by the company in their dining cars. This particular one was probably sold as a souvenir, perhaps on the train or at the train station.

The plates were made for Missouri Pacific by the Onondaga Pottery Co. of Syracuse, N.Y. The company can trace its origins to 1841, but 1871 is probably a firmer date. Most people know the company by the name Syracuse China Co., but they have reportedly been out of business since 2009.

There are many collectors of railroad memorabilia, and a piece like this with a locomotive in the center would certainly be attractive to many collectors. If it had been the state Capitol version, it should have retailed in the $150 to $200 range, but the floral border pieces do not have quite the necessary pizzazz to command that much money. This example from the late 1940s should be valued in the $60 to $80 range.