U.S. to allocate $1.7B to track variants' spread 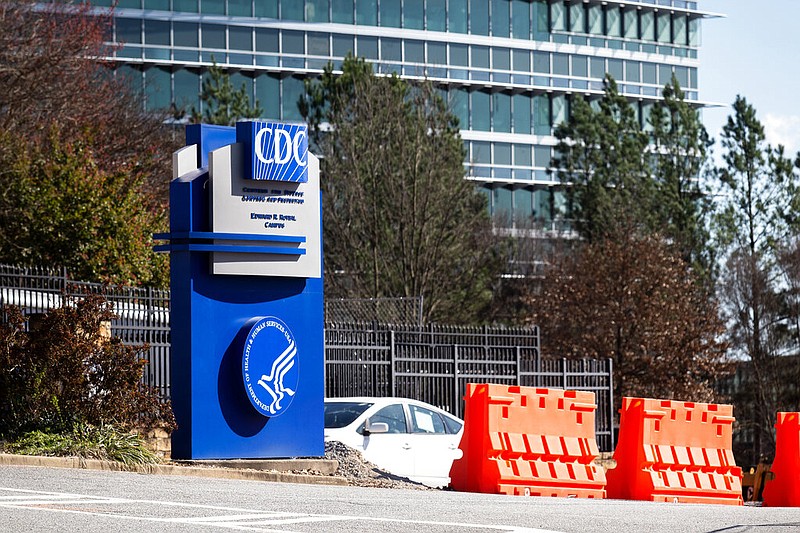 The headquarters for the Centers for Disease Control and Prevention in Atlanta is shown in this March 6, 2020, file photo. (AP/Ron Harris)

WASHINGTON -- The U.S. is setting up a $1.7 billion national network to identify and track the spread of worrisome coronavirus mutations that could trigger another pandemic wave, the Biden administration announced Friday.

• A major funding boost for the Centers for Disease Control and Prevention and state health departments to ramp up coronavirus gene-mapping.

• The creation of six "centers of excellence" partnerships with universities to conduct research and develop technologies for gene-based surveillance of pathogens.

• Building a data system to better disseminate and analyze information on emerging disease threats, so knowledge can be turned into action.

"Even as we accelerate our efforts to get shots into arms, more dangerous variants are growing, causing increases in cases in people without immunity," White House coronavirus adviser Andy Slavitt told reporters. That "requires us to intensify our efforts to quickly test for and find the genetic sequence of the virus as it spreads."

The new effort relies on money approved by Congress as part of President Joe Biden's coronavirus relief package to break what experts say is a feast-or-famine cycle in U.S. preparedness for disease threats. The coronavirus is only one example.

Other pathogens have included Ebola and Zika, and respiratory viruses like SARS in 2002 and MERS in 2012, which did not become major problems in the United States. Typically, the government scrambles to counter a potential threat but funding dries up when it recedes. The new genomic surveillance initiative aims to create a permanent infrastructure.

"It is unquestionably a good move, that will likely help with the pandemic, and potentially many other infectious diseases as well," said William Hanage, an epidemiologist at the Harvard T.H. Chan School of Public Health. "On paper the plans look great, including innovation and funding targeted to states to help them. As ever, the impact will depend on the implementation, but this is an opportunity for the country to level up."

White House officials said the government is releasing to states and territories an initial $240 million out of $1 billion allocated to expand genomic sequencing. Another $400 million will go toward six research partnerships with academic institutions, dubbed Centers of Excellence in Genomic Epidemiology. Finally, $300 million will go to set up the data-sharing system, which is being called the National Bioinformatics Infrastructure.

[Video not showing up above? Click here to watch » https://www.youtube.com/watch?v=gB05tckiq10]

The funding will be distributed to states in two batches, the first to be sent in early May. The second round will be invested over the next several years.

"It's a transformative amount of money," Mary Lee Watts, federal affairs director at the American Society for Microbiology, said in a recent interview. "It has the potential not only to get ahead of the current crisis, but it is going to help us in the future. This is a program that has been underfunded for years."

The Biden administration's move is made as a variant known as B117, which first emerged in the United Kingdom, has become the predominant strain in the U.S.

In hard-hit Michigan, the more transmissible mutation accounts for more than half the cases, according to CDC data. That's also the case in Minnesota. Vaccines are effective against the so-called U.K. variant, but other mutations circulating around the globe have shown some resistance to current vaccines.

CDC Director Dr. Rochelle Walensky said Friday that the U.S. is now averaging nearly 70,000 new coronavirus cases daily, up from about 53,000 just four weeks ago. Hospitalizations have been trending higher, too, and deaths were up for the third-straight day. Along with relaxed restrictions on gatherings and indoor dining, the emergence of variants that spread more easily is part of the reason for the worsening trend.

Of particular concern are two variants that for now have only a toehold in the U.S. They are P1, first detected in travelers from Brazil, and B1351, identified in South Africa. The reason scientists are watching those variants is that they have shown some level of resistance to antibodies, the defensive proteins produced by the human body in response to vaccines or a previous infection.

There is no evidence, however, that the variants are a driving force behind the tiny number of "breakthrough infections" that have occurred among people already fully vaccinated. Most experts believe those breakthrough cases are because of poor immune system response, not to mutations in the virus.

"In order for us to even have the possibility of getting back to normal by the fall, we need to massively scale up our genomic surveillance," said Esther Krofah, who directs the Faster Cures initiative of the Milken Institute. "It's the insurance program that you need to have in place not just now, not just for covid, but going forward for other pathogens of concern."

Genomic sequencing essentially involves mapping the DNA of an organism, the key to its unique features. It's done by high-tech machines that can cost $1 million or more. Technicians trained to run the machines and the necessary computing capacity add to the costs.

Another hurdle is getting local, state and federal labs all working together. "There are lots of cats that need to be herded," said University of Wisconsin virologist Thomas Friedrich.

The feeble capacity for genomic sequencing hampered the battlefield awareness of U.S. officials as new variants began to spread.

At the end of last year, the CDC and collaborating labs were completing only 116 coronavirus gene sequences a week, according to the CDC's website. "We started in a hole," said Slavitt.

The White House says the weekly count is now about 29,000, but experts say that in a large, diverse country like the U.S. those numbers need to be much higher to keep pace with potential changes to the virus. Viruses are highly efficient at spreading, developing mutations that enable them to keep reproducing.

Scientists have long said that giving people a single course of a covid-19 vaccine might not be sufficient in the long term, and that booster shots and even annual vaccinations might prove necessary. In recent days, that proposition has begun to sound less hypothetical.

Vaccine-makers are getting a jump-start on possible new rounds of shots, although they sound more certain of the need for boosters than independent scientists have.

Pfizer CEO Albert Bourla said Thursday that a third dose of the company's vaccine was "likely" to be needed within a year of the initial two-dose inoculation -- followed by annual shots.

Dr. David Kessler, who runs the Biden administration's vaccine effort, told a House subcommittee Thursday that the government also was looking ahead. One factor at play is the spread of variants and whether further vaccination could better target mutant strains.

Bourla said "a likely scenario" is "a third dose somewhere between six and 12 months, and from there it would be an annual revaccination."

Moderna said this week that it was at work on a booster, and Johnson & Johnson has said its single-shot vaccine will probably need to be given annually.

Kessler emphasized the "strong efficacy" of the current vaccines, including against the variants, but said the government was "taking steps to develop the next generation of vaccines that are directed against these variants if in fact they can be more effective."

He was one of a handful of top federal health officials at the House hearing who implored Americans to get vaccinated and sought to reassure the nation that all three federally authorized vaccines are safe. They said little about restarting Johnson & Johnson shots, which the Food and Drug Administration has paused to examine a rare blood-clotting disorder.

Late Thursday, the Centers for Disease Control and Prevention said that it had scheduled a new emergency hearing for next Friday.

Meanwhile, 10 liberal senators are urging Biden to back India and South Africa's appeal to the World Trade Organization to temporarily relax intellectual-property rules so vaccines can be manufactured by nations that are struggling to inoculate their populations.

In a letter delivered Thursday evening to the White House, the lawmakers wrote that the president should "prioritize people over pharmaceutical company profits" and support the temporary waiver of the rules. A waiver could pave the way for generic or other manufacturers to make more vaccines.

The letter was led by independent Sen. Bernie Sanders of Vermont, along with Democratic Sens. Elizabeth Warren of Massachusetts, Tammy Baldwin of Wisconsin and Sherrod Brown of Ohio. Democratic Sens. Richard Blumenthal of Connecticut, Chris Murphy of Connecticut, Edward Markey of Massachusetts, Jeff Merkley of Oregon, Chris Van Hollen of Maryland and Raphael Warnock of Georgia also signed the letter.

"Simply put, we must make vaccines, testing, and treatments accessible everywhere if we are going to crush the virus anywhere," the lawmakers say in the letter, which was obtained by The Associated Press.

More than 100 nations support a temporary waiver, which could help manufacturing ramp up in poorer countries that are struggling to acquire vaccine supplies. The Biden administration has said it is studying the issue.

Opponents, including pharmaceutical companies, worry that it would set a dangerous precedent in allowing scientists around the globe to copy American and European companies' research -- some of which was funded by the U.S. government -- long before patents expire. The Trump administration had opposed calls for the waiver.

The White House did not respond to a request for comment.

The appeal came after 170 former world leaders and Nobel laureates earlier this week sent a similar letter to Biden urging him to support a temporary waiver of the global intellectual-property rules.

Information for this article was contributed by Ricardo Alonso-Zaldivar, Zeke Miller and Aamer Madhani of The Associated Press; by Tyler Pager and Joel Achenbach of The Washington Post; and by Remy Tumin of The New York Times. 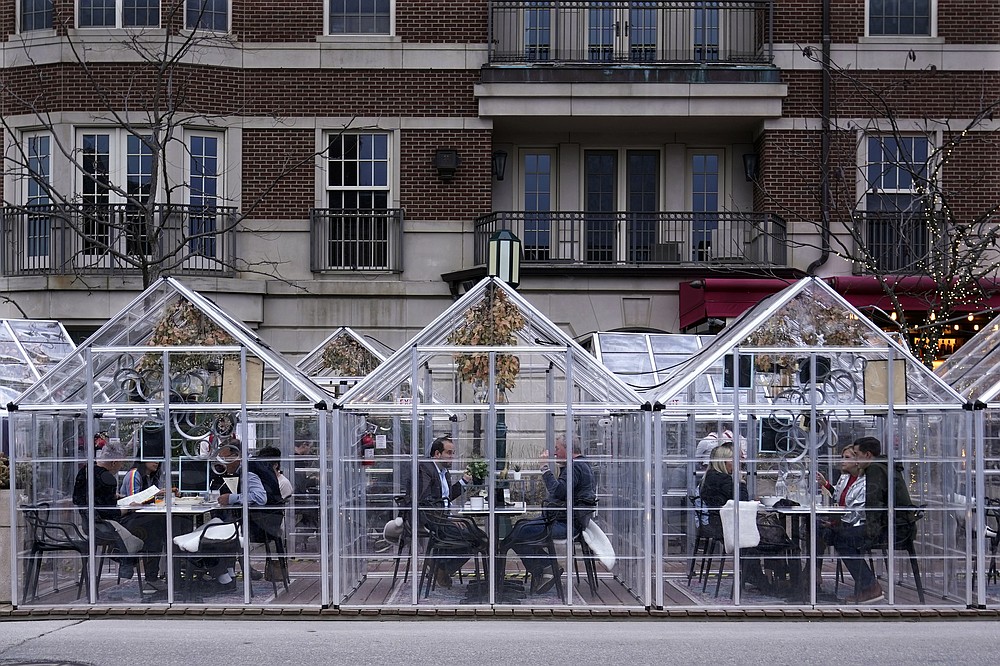 FILE - In this March 25, 2021, file photo, diners eat in isolated dining rooms outside the Townhouse restaurant, in Birmingham, Mich. Nearly half of new coronavirus infections nationwide are in just five states, including Michigan — a situation that puts pressure on the federal government to consider changing how it distributes vaccines by sending more doses to hot spots. (AP Photo/Carlos Osorio, File) 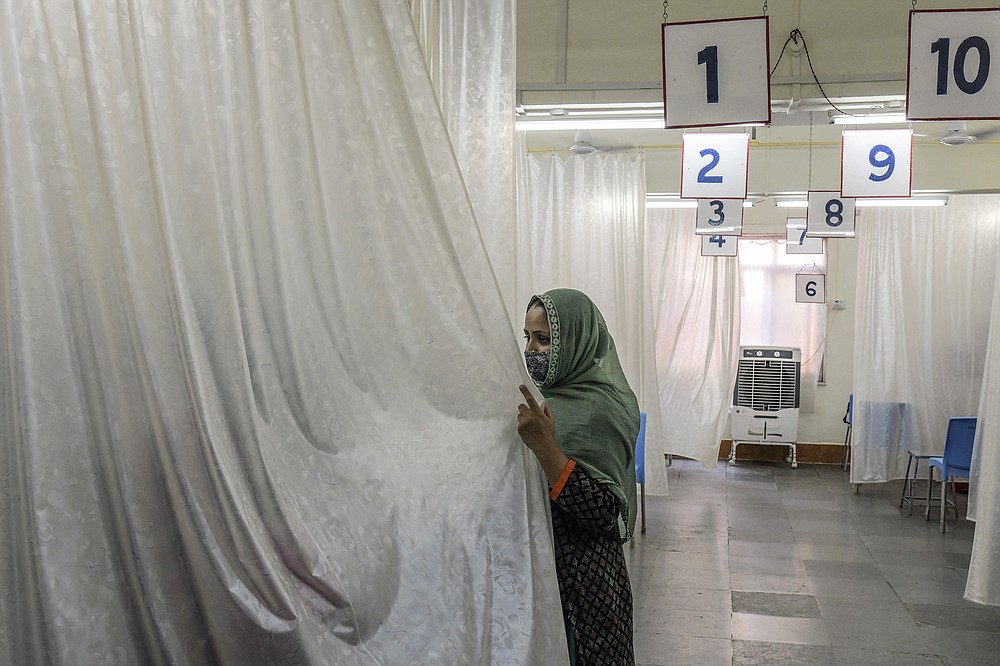 A woman waits with a relative Friday at a government hospital covid-19 vaccination center in Mumbai, India. A group of 10 liberal U.S. senators called on President Joe Biden to back an appeal by India and South Africa for the World Trade Organization to to ease intellectual-property rules so nations short on vaccines can manufacture their own. More photos at arkansasonline.com/417covid/. (The New York Times/Atul Loke) 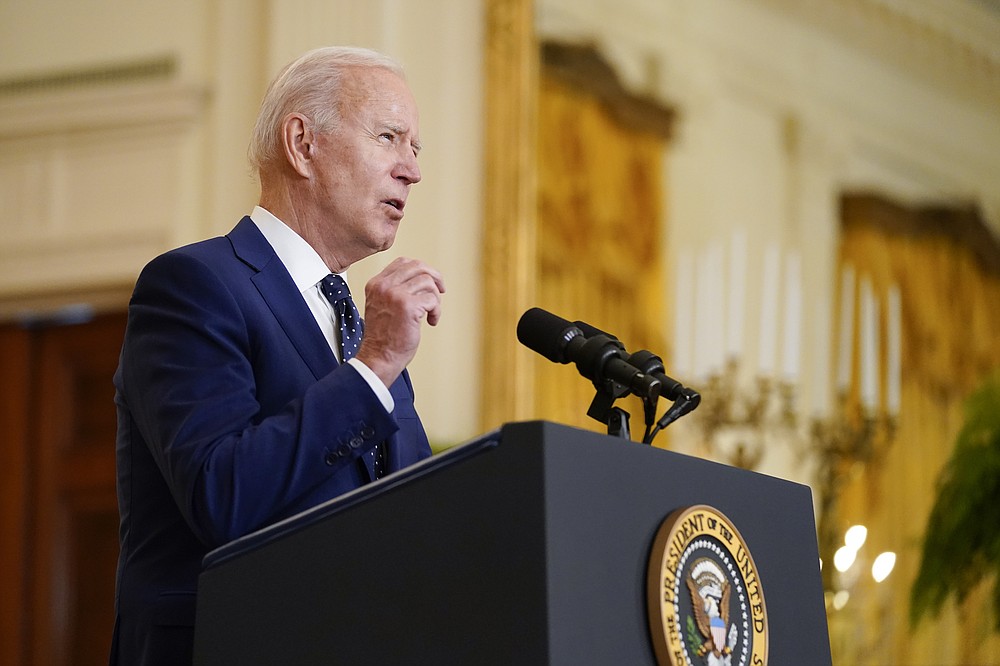 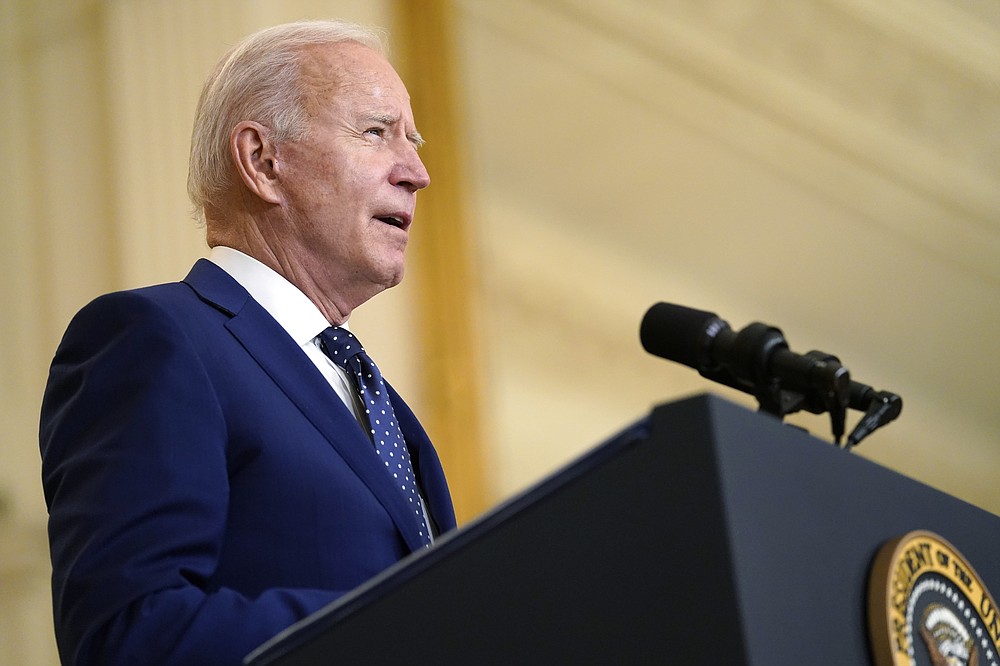