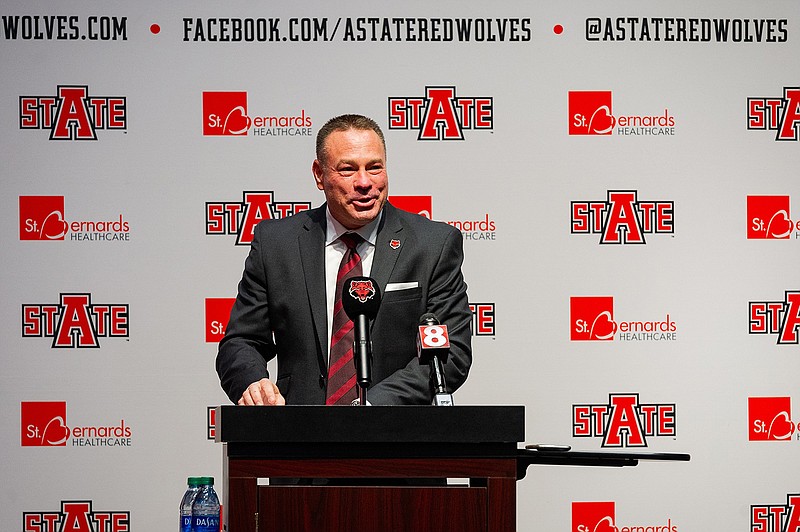 Butch Jones is shown in this file photo.

JONESBORO -- Life in the pocket has been hotter than usual this spring for Arkansas State University quarterback Layne Hatcher.

"The way our defense brings pressure now, I need to keep my eyes open because there's guys flying everywhere," the redshirt junior said.

The congested backfield is the result of the most fundamental change Coach Butch Jones and defensive coordinator Rob Harley have introduced since they arrived in December.

The Red Wolves' switch to a four-down scheme this offseason placed an additional lineman up front and shifted a defense that finished sixth in the Sun Belt in sacks last season to a focus on creating pressure and winning at the line of scrimmage.

The conversion has led to more pressures, hurries and sacks through spring practices from newcomers on the edge such as senior Joe Ozougwu and junior Thurman Geathers, and interior lineman like senior Terry Hampton.

"We're aligned to create havoc," senior defensive lineman Vidal Scott said. "There's a lot of us on the line, and we're coming from all different angles. We're bringing chaos and creating destruction."

In today's spring game, the new-look defense will get its first shot in front of a crowd at Centennial Bank Stadium. The new alignment will be on display in the spring scrimmage, set to kick off at 2 p.m. The Red Wolves will play four quarters of live action with the first-team offense and second-team defense facing a squad comprised of ASU's No. 1 defense and backup offensive players.

The exhibition is open to the public with free admission. Fans can enter Centennial Bank Stadium through Gates 2, 6-9, 11 and 19 starting at 12:30 p.m, and those in attendance are encouraged to practice social distancing.

"We expect a highly competitive game," Jones said. "We'll get in front of our great fan base and experience Jonesboro at its finest on a great Saturday."

The new defensive scheme Red Wolves fans will see has been employed by Jones' programs at each of his previous three head coaching stops at Central Michigan, Cincinnati and Tennessee. With two interior lineman sandwiched between a pair of defensive ends at the line of scrimmage, the goal of the alignment is to create one-on-one opportunities for individual defenders to exploit and break into the backfield.

The design is for the four defenders on the line of scrimmage to become disruptors. Jones is less concerned with his defense compiling sacks as he is with it creating chaos in the backfields of opposing offenses.

Not only are ASU's linemen benefiting from the pressure they bring, but so are the linebackers and defensive backs behind them.

"Everybody still measures themselves by sacks, but the game has really changed," Jones said. "I've always measured a defensive line by how you impact a quarterback. Do you get tipped balls? Overthrows? That's going to happen, and that's as big for an entire defense as a sack."

Hampton said this week that there was an adjustment period early in spring camp. The system called for each lineman to learn new techniques and adapt to altered responsibilities. But the scheme also delivered freedom in the one-on-one matchups that have simplified roles on the front four.

Hampton, for instance, has benefited from slotting into the three-technique alongside another interior lineman. The 6-0, 293-pound tackle is finding new ways to bring pressure from the middle this spring, and Jones expects him to be "one of the better interior players in the Sun Belt Conference and in the country" in 2021.

Hampton said he isn't the only one enjoying the new alignment of the defensive line.

"There's more opportunities across the D-line," he said. "We're going to be really dynamic. I can't give away too much, but we're going to get after it."

NOTE Times have not been announced 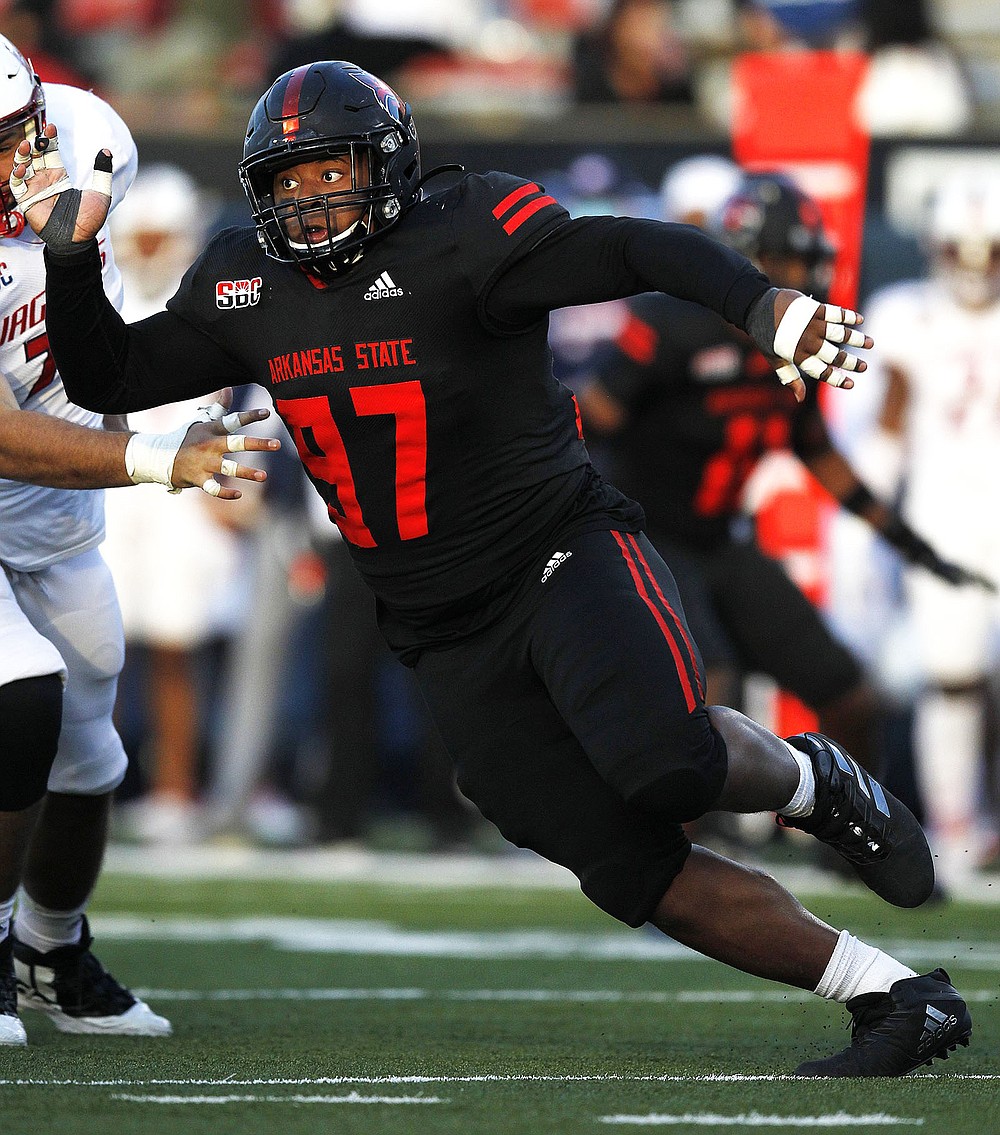 Arkansas State University senior Terry Hampton said the Red Wolves’ new defensive alignment gives more opportunities for everyone on the defensive line. “We’re going to be really dynamic. I can’t give away too much, but we’re going to get after it,” he said. (Arkansas Democrat-Gazette/Thomas Metthe)
ADVERTISEMENT