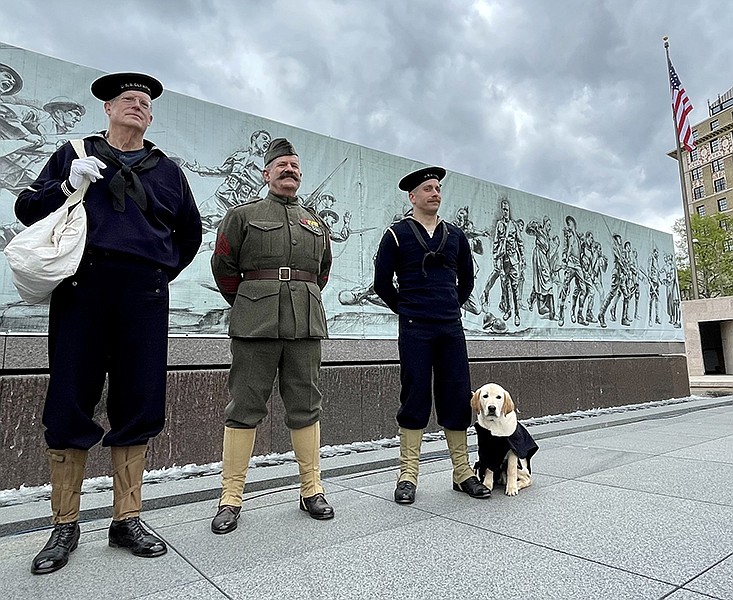 The new National World War I Memorial in Washington, heralded in a ceremony Friday, honors the more than 4 million veterans of what is known as America’s Great War. Arkansan Joseph Weishaar designed the memorial. More photos at arkansasonline.com/417wwi/. (Arkansas Democrat-Gazette/Frank E. Lockwood)

WASHINGTON -- More than a century after their guns fell silent, U.S. soldiers of the Great War finally have a monument of their own in the heart of the capital city.

The National World War I Memorial, built at a cost of roughly $50 million, opened to the public Friday.

Fayetteville native Joseph Weishaar, the project's designer, had a front-row seat for the flag-raising ceremony, which featured a color guard, a wreath laying, a live performance by the U.S. Army Band and a high-decibel fly-over by two F-22 Raptors.

"This is one of the most incredible experiences in my life. It was an incredible moment for America. And to be in the middle of it? Words can't describe that," Weishaar said.

More than 4 million Americans served in uniform during the conflict, enabling England, France and their allies to defeat the nations aligned with Germany and Austria-Hungary.

The toll for the United States was high: 116,516 Americans lost their lives while serving. Thousands of them are buried overseas.

The conflict touched "almost every American family at the time," Biden said.

After the Armistice, many communities erected monuments to their own fallen; the District of Columbia did as well. Kansas City, Mo., had a bigger vision, building what it called a Liberty Tower, 217 feet tall, "in commemoration of the service and sacrifice of American soldiers, sailors, and citizens in the Great War."

Instead, memorials were built for those who served in Vietnam, Korea and World War II.

"For too long, that nationwide service has not been fully commemorated here, in the nation's capital," Biden said. "This memorial finally will offer a chance for people to visit and to reflect and to remember."

Haaland, whose father is buried at Arlington National Cemetery, authorized the flag to be raised Friday for the first time at the WWI memorial and promised that the National Park Service would be there "every day of every year watching over this memorial."

"As the daughter of a combat veteran, it's not lost on me that the veterans of World War I never lived to see a national memorial to their service and sacrifice here in our nation's capital, a place where their families could share their stories and heal their grief. Today, we right that wrong. Today we remember them," she said.

The last World War I veteran, Frank Buckles, died in 2011; he was 110 years old. Two years before his passing, he testified on Capitol Hill, encouraging lawmakers to build a memorial.

Congress eventually agreed, passing legislation in 2014 to do just that.

Pershing Park was designated as the site for the memorial. The 1.76-acre parcel, which lies along Pennsylvania Avenue, already included a statue honoring the man who commanded U.S. troops in World War I -- General of the Armies John Joseph "Black Jack" Pershing.

It would take more than six years to come up with a design, raise the money and build it.

The United States World War I Centennial Commission was tasked with the mission. It held an international design competition that resulted in 350 entries.

Weishaar, a 2013 graduate of the Fay Jones School of Architecture at the University of Arkansas, Fayetteville, submitted the winning concept.

After his selection in January 2016, he moved to Washington to focus on the project, making changes repeatedly in order to gain regulatory approval from a variety of agencies.

One body, the Commission of Fine Arts, signed off on the blueprints after three years of refinements.

Weishaar's initial proposal had to be reworked after protests from preservationists and a determination, by the National Park Service, that the existing park was eligible for placement on the National Register of Historic Places.

Instead of the original plan to raze much of Pershing Park and start over, he ended up keeping much of the old park's original design.

Asked at the time how he dealt with the criticism, Weishaar cited the counsel he had received from Maya Lin, the designer of the Vietnam Veterans Memorial.

"Her advice was, 'Try to smile every day. Have fun with it,'" he said. "It would be a hard process if I didn't have a good attitude about it."

The effort, ultimately, was successful.

The finished product, Haaland said, is a fitting tribute to those who served in World War I.

"Their deeds will forever be enshrined in this memorial because of the great work done by the architect, Joe Weishaar, and the design team, who, in close consultation with the Commission of Fine Arts and so many others, created this sacred space."

After more than five years of work, Weishaar said he is ready for new challenges. He married in 2017 and moved to Atlanta earlier this year.

His wife, Stephanie, planned to watch the ceremony remotely from Georgia. With a baby on the way, travel wasn't advisable, Weishaar said.

While the park officially opened Friday, it is not yet complete.

A formal dedication will occur once sculptor Sabin Howard completes the memorial's centerpiece -- a 58-foot-long bronze work of art.

"Three years from now, we'll install the sculpture, and that will be an even bigger event," Weishaar said.

Asked if Biden will be there, Weishaar said, "That's the goal." 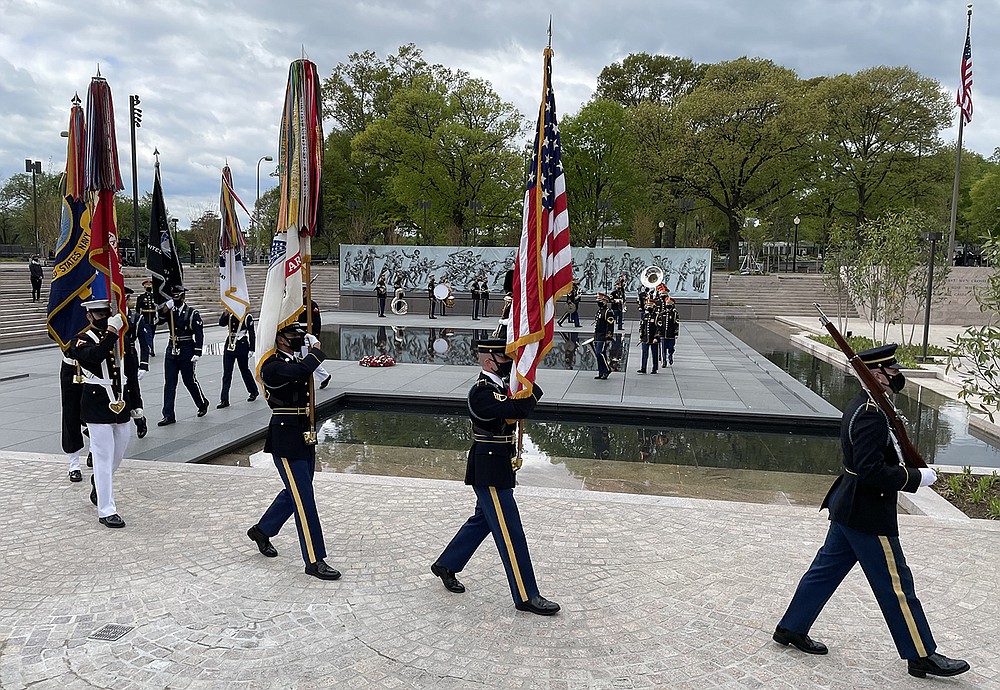 Service members depart after the end of the National World War I Memorial ceremony in Washington on Friday. The memorial was designed by an Arkansan, Joseph Weishaar. (Arkansas Democrat-Gazette/Frank E. Lockwood)
ADVERTISEMENT