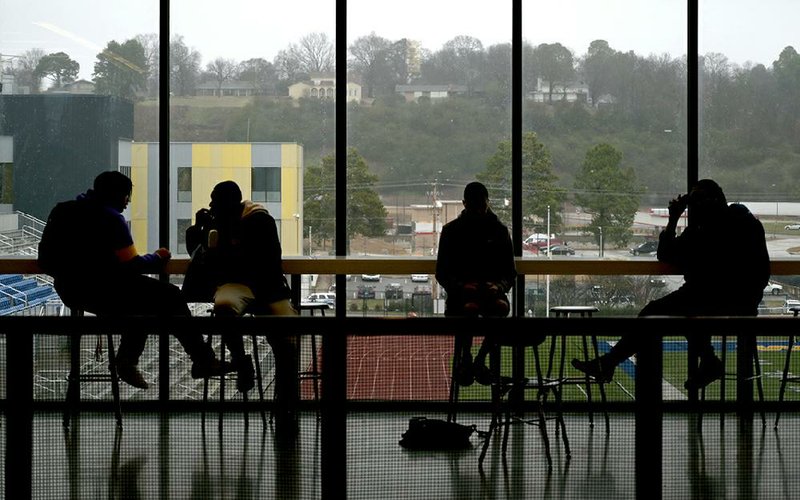 FILE - Kids sit against the glass in the cafeteria between classes at North Little Rock High School on Wednesday, Feb. 5, 2020. (Arkansas Democrat-Gazette/Stephen Swofford)

Data collected over the past several months shows the need to change the overall culture within the North Little Rock School District, according to its superintendent.

Superintendent Gregory Pilewski’s 100-day transition plan summary was presented Thursday night to the School Board, detailing concerns Pilewski encountered during meetings with teachers, parents and stakeholders. The summary includes short- and long-term goals for the district.

“This data is meant to draw a sense of urgency within the school district,” Pilewski said Friday. “It’s meant to show that we need to act and do something now to serve all our students, because the data shows that we aren’t serving all of our students.” One of the key themes is changing a culture that was described often during interviews as being “toxic,” which led to negative perceptions internally and externally.

Pilewski said among those concerns were disharmony among School Board members; an emphasis on athletics over academic programs; fear of retaliation from central office leaders; a lack of transparency and trust in leadership; and feelings of racial and economic division.

The superintendent said these concerns, and others, have created a unwelcome culture within the district.

“One of things that has been described to me is a culture that hasn’t been conducive for learning and working where people feel empowered,” Pilewski said. “Culture always plays in to the shaping of the district.” Pilewski’s 100-day transition plan was split into a pre-entry phase, an entry phase and a summary report.

The preentry phase was in September and October and involved interviews and meetings with key stakeholder groups and a tour of the facilities.

The entry phase was from November to April and included additional interviews and a retreat for board members.

Pilewski said he gathered data from all the campuses within the district and found several “alarming” trends.

“One of the very glaring statistics was a stagnant or declining student achievement,” he said. “The data points to an achievement gap with six schools below a ‘C’ report card rating.” The data showed 82.5% of students graduate, 41.6% accumulate college credit while in high school, and 36.8% go to college Data also showed a 12-year decline in enrollment, from 8,814 students in 2010 to 7,588 in 2021.

Pilewski said one of the statistics that stood out was the loss of students in the alternative learning program.

“Basically it appears from kindergarten forward, when our students are referred to that program they are not exiting,” he said. “This leads to more questions. As we move forward we need to look at transforming our alternative education.” Pilewski said the district has about 115 students who have dropped out this year.

“The question becomes: Why and how do we meet these individual students’ needs?” he said.

Pilewski said during Thursday’s School Board meeting that a lack of focus on academics, rigorous daily instruction and uncoordinated curricular programs are believed to be indicators of declining student enrollment over time. He said interviews showed that teachers often feel initiatives are misaligned, unclear and there are too many initiatives at one time to implement.

Pilewski said district leaders must acknowledge the current state and reality they find themselves in and begin changing the district’s culture.

“Nobody should feel afraid of the people leading them,” Pilewski told board members.

Pilewski said he is looking at developing an executive leadership team, implementing intense professional development, creating a customized targeted support plan for schools that fall below the state’s “C” grade, and conducting districtwide audits that center on leadership, enrollment and curriculum, among other things.

Board members praised Pilewski for the presentation and expressed agreement that it’s time for the district to become more unified.

“You told the truth about what you have heard,” board member Dorothy Williams said. “It’s time to move forward.” Board member Tracy Steele also warned Pilewski that changing the district will be a challenge.

“There haven’t been a lot of superintendents who have survived past this point, because the next step is ruffling some feathers,” he said. “When you start implementing your plan is when the honeymoon is over.” Pilewski told the board he understands hard decisions must be made, but added that is what he is being paid to do.

“It takes a village,” he said. “It takes all of us uniting around that common purpose to improve the needs of every single student.”