Files link Arkansans to role in Bay of Pigs 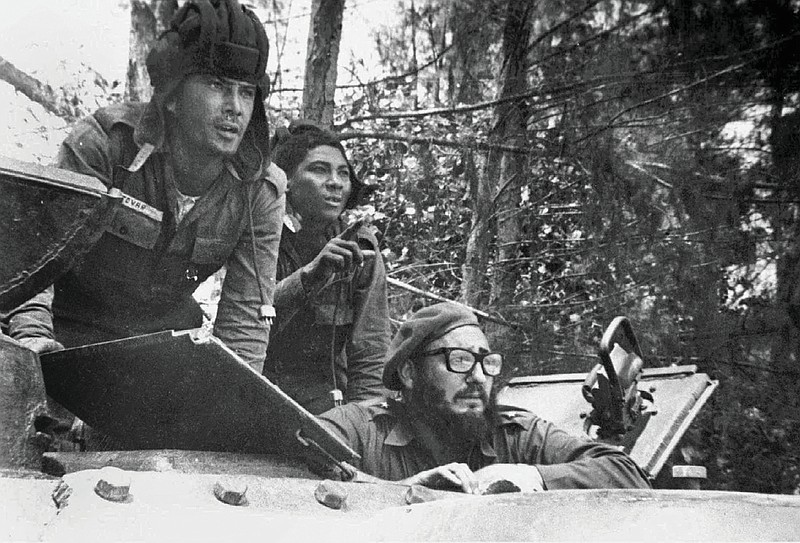 Twenty-four Arkansans helped train Cuban exiles in Guatemala for the Bay of Pigs invasion on April 17-19, 1961, according to recordings of President John F. Kennedy talking to aides and intelligence officers.

The Arkansans were among 124 National Guard personnel recruited from Alabama, Arkansas, Georgia, Washington, D.C., and one from California to train the Cuban exiles, Richard Helms, deputy director of the Central Intelligence Agency, told Kennedy in a March 6, 1963, telephone conversation.

They were talking about the Arkansas Guardsmen because, earlier that day, Gov. Orval Faubus told reporters that Arkansas Air National Guard pilots flew combat missions during the invasion and an airplane that had belonged to the Arkansas Guard was shot down.

But no Arkansas Guardsmen participated in the invasion, according to recordings at the John F. Kennedy Presidential Library in Boston.

"You tell him what they did is they participated in the training down there in Nicaragua and Guatemala, but they didn't fly in combat," Kennedy told Larry O'Brien, an aide, regarding Faubus and the Arkansas Guardsmen.

"Why don't you just tell him that what we want to do is just put the god---- thing to rest?" Kennedy said. "So whatever they can do down there to just shut it all up, is fine with us."

This weekend marks the 60th anniversary of the invasion. The involvement of the Arkansas Guardsmen has slowly come to light as documents and recordings have been declassified over the decades.

There were a few articles in Arkansas newspapers after Faubus' accusation, and stories from the wire services, but after federal officials said Arkansas airmen weren't involved in the botched invasion of Cuba, Faubus apparently let it go.

The recordings of Kennedy's telephone conversations about the Bay of Pigs were opened to the public in 1998, but they were available only on cassette tape at that time. The recordings were digitized and made available online around 2012, according to an archivist at the Kennedy Presidential Library.

"I was aware of it," said retired Chief Master Sgt. Richard Green of Hot Springs, who was in the Arkansas Air National Guard from 1965 to 2004.

Green said the two people he was thinking of "have passed on." They were involved in training, not combat, he said.

And they didn't talk much about it.

"It was pretty hush, hush," Green said. "It's not in any of the history books on the Air National Guard."

Sixty years ago this weekend, about 1,400 Cuban exiles landed on beaches at the Bay of Pigs in an attempt to overthrow Fidel Castro, but he was prepared for the invasion.

"Cuban planes strafed the invaders, sank two escort ships and destroyed half of the exiles' air support," according to the JFK Library. "Bad weather hampered the ground force, which had to work with soggy equipment and insufficient ammunition.

"Over the next 24 hours, Castro ordered roughly 20,000 troops to advance toward the beach, and the Cuban air force continued to control the skies. ... The CIA had used obsolete World War II B-26 bombers and painted them to look like Cuban air force planes."

Kennedy authorized an "air-umbrella" at dawn on April 19. Six unmarked American fighter planes took off to help defend the brigade's B-26s, but there was a mix-up with the timing. The jets and B-26s arrived at different times. The B-26s were shot down by the Cubans, and the invasion was crushed later that day, according to the JFK Library.

The CIA's invasion plan had been hatched during the administration of President Dwight Eisenhower.

Castro came to power in 1959 in an armed revolt that overthrew Cuban dictator Fulgencio Batista. The U.S. government didn't trust Castro and was wary of his relationship with Soviet leader Nikita Khrushchev, according to the JFK Library.

Kennedy was briefed on the Cuban invasion plan before his inauguration on Jan. 20, 1961.

"The ultimate goal was the overthrow of Castro and the establishment of a non-communist government friendly to the United States," according to the JFK Library.

A couple of months after the Bay of Pigs invasion, on June 11, 1961, the Arkansas Democrat published an article quoting an unnamed source saying that besides training the Cuban exiles, some Arkansas pilots were on an aircraft carrier ready to fly in the combat invasion but were never given the order to do so.

"They moved out to their battle point and just sat there throughout the invasion," the source told the Arkansas Democrat.

At least four flyers from the Little Rock area went to Central America in August 1960 and returned to Arkansas a few weeks ago, the article read, citing the unnamed source.

The Arkansas airmen were released from their reserve or military status to participate in the training and/or mission, according to the Democrat article. In one of the recordings, Kennedy refers to 124 who participated as "former guardsmen."

Faubus was talking about the Bay of Pigs invasion on March 6, 1963, because it had recently been revealed that four Alabama air guardsmen died during the invasion, according to articles in the Arkansas Democrat and Arkansas Gazette.

During a news conference that day, Kennedy was asked if the four Americans who died during the Bay of Pigs invasion were employed by the CIA or the U.S. government.

"The flight that cost them their lives was a voluntary flight, and while because of the nature of their work it has not been a matter of public record, as it might be in the case of soldiers or sailors, I can say that they were serving their country," said Kennedy, according to a declassified CIA document.

About 60 Alabama Guardsmen had participated in the training or the invasion, according to the Encyclopedia of Alabama: encyclopediaofalabama.org/article/h-2134.

A top-secret CIA document titled "Official History of the Bay of Pigs Operation, Vol. 1," which was declassified in 2011, stated that: "Before the operation closed out in April 1961, there were 33 members of the Alabama ANG, 21 from the Arkansas ANG, 14 from Georgia, nine from the District of Columbia, and two from California who served with the project."

In a footnote, the CIA states: "In addition to those 80 who actually belonged to National Guard units, another 50 contract employees with either ANG affiliation or spotted by ANG personnel were under contract to one of [the project's] cover companies [redacted company names] or were direct hires. Consequently, the figure commonly used for total ANG participation in the project is 130." (cia.gov/readingroom/docs/bop-vol1-part1.pdf).

In 1978, the CIA declassified critical documents and posthumously awarded the Distinguished Intelligence Cross to the dead Alabama men, according to the Encyclopedia of Alabama article. Nine years later, the U.S. revealed that eight Alabama Air National Guard members had flown into Cuban airspace during the Bay of Pigs invasion.

Initially, Americans weren't supposed to participate, but things were going badly for the exiles.

"The CIA finally authorized the Alabama guardsmen to fly on April 19," according to the Encyclopedia of Alabama article. "These eight Alabama guardsmen flew combat missions on the last day when the Cuban pilots were exhausted. It was a desperate measure, but the Cubans on the beaches needed help badly."

The fate of those Alabama airmen shed light on Air National Guard involvement in the invasion, but the identities of the Arkansas Guardsmen who helped with the training remains unknown to the general public.

Several professors and historians contacted for this article said they knew nothing about the Arkansas involvement.

"It is actually pretty uncommon knowledge since the literature/scholarship/popular culture all revolve around the JFK administration, Fidel Castro, and the Cuban dissidents," Aaron Coy Moulton, assistant professor in Latin American history at Stephen F. Austin State University, said in an email. "Since (I want to say) the early 1990s (but possibly the late 1980s), the Alabama Guardsmen have gained most attention, for they not only helped train the participants but were actually involved in it."

Faubus said anywhere from 12 to 25 Arkansas Guardsmen were recruited by the federal government to help the anti-Castro forces, according to a front-page article in the Arkansas Gazette on March 7, 1963.

Some of them trained troops in the use of American-made weapons, Faubus said. And some were engaged in "the air activities" during the invasion at the Bay of Pigs, he said.

"As far as he knew, no airmen from Arkansas were casualties but he said one airplane from Arkansas was shot down in a Cuban raid," according to the Gazette. "The Air Guardsmen involved still were sworn to secrecy, he added."

The article quoted an unnamed person at the air base in Fort Smith saying nine of his fellow pilots went on a classified mission about a month before the invasion.

Brig. Gen. Frank Bailey, chief of staff for the Arkansas Air National Guard, told reporters at the time that he didn't know what Faubus was talking about.

The downed airplane Faubus referred to was apparently one that had been used by the Arkansas Air National Guard, taken out of service, then recognized by Arkansas airmen who saw it among the planes retrofitted for the Bay of Pigs invasion, according to articles in Arkansas newspapers.

In the recordings at the JFK Library, Helms told Kennedy that eight of 24 Arkansas Guardsmen were officers -- pilots, navigators, planners. The other 16 were involved in ground crews, "mechanics and things of that kind."

Some pilots from Civil Air Transport were also involved, Helms told the president.

In another recording, Kennedy appears to be reading from a United Press International wire-service report that was distributed to newspapers nationwide on March 6, 1963.

"Faubus is saying that I left Arkansas boys to die," Kennedy told McGeorge Bundy, an aide, in a telephone conversation shortly before the president spoke with Helms that same day.

"Faubus said the guardsmen were recruited in the national interest but left hanging by the administration of President Kennedy," according to the UPI report.

Arkansas newspapers and wire-service reports quoted Faubus as saying the federal government had come down South to recruit National Guardsmen to train the Cuban exiles because they couldn't get guardsmen up North to do it.

"I think that was pure happenstance," Helms told Kennedy.

The declassified CIA report quoted Maj. Billy B. Campbell, who was initially put in charge of the B-26 air training program in Guatemala, as saying Alabama, Arkansas and Georgia Air National Guards were chosen because they were still flying the B-26 planes at that time.