Get it and flaunt it: The brooch is back 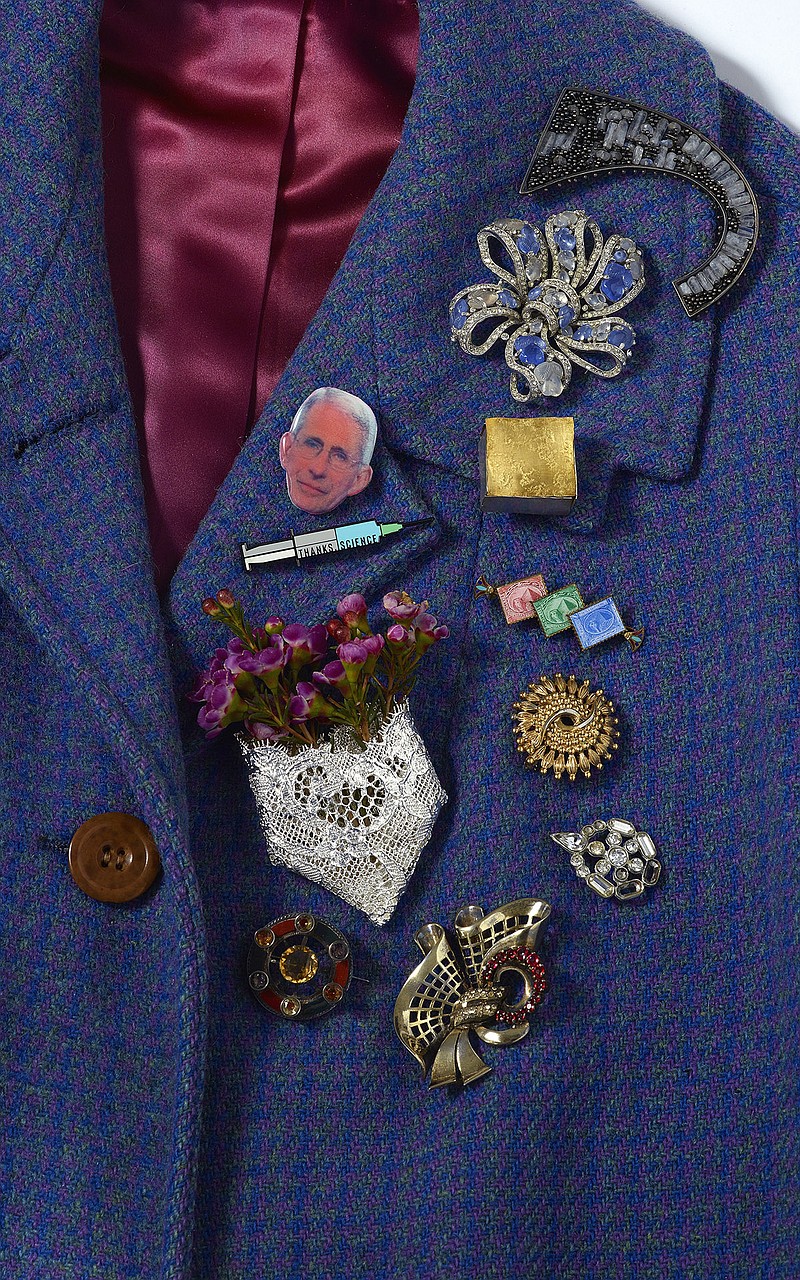 An assortment of brooches old and new includes a pin of Dr. Anthony Fauci. (The New York Times/David Lewis Taylor)

Widely considered stodgy and trite, brooches have been seriously out of fashion ever since the power-suit-ridden "Dynasty" years. Grandmothers have drawers full of them. Catherine O'Hara, playing the loony Moira Rose on "Schitt's Creek," wears them constantly -- even when going to bed.

Jewelers rarely list them on their e-commerce shopping menus (but they do sell them). And from the 1950s through the '80s, they acquired a reputation "as daytime, luncheon jewels," said Marion Fasel, a fine-jewelry historian. Who, if anyone, has lunched since the '80s?

All of this means, of course, that the brooch is ripe for a revival.

In the 2020s, "it's men who are in charge of making brooches cool again," Fasel said. Rege-Jean Page showed up on "Saturday Night Live" last month wearing an Alexander McQueen suit that came with three pearl brooches sewn onto the lapel. Jared Leto chose a huge, corsage-y Gucci brooch at the Golden Globes, where Anthony Anderson went for a Chopard flower.

At the Grammys, Trevor Noah wore the Tiffany-Schlumberger gold-spiked, diamond-studded Apollo brooch, and DaBaby went for a diamond DG pin on his Dolce & Gabbana jacket, only to switch to a Chanel jacket affixed with a diamond C on each lapel.

A number of brooches today are marketed specifically to men, and they're different from the dainty, ladylike pins of the past. The McQueen lily brooch in antique silver not only looks slightly past its prime, but also, on close inspection, as noted by New York gem dealer and jewelry historian Benjamin Zucker, has minuscule skulls and crossbones atop its pistils. He described the piece as "ominous and arresting."

A Gucci cotton brooch labeled Embroidered Hare -- technically, it's mostly crocheted -- evokes handicrafts, yet on the company website it's attached to the business-suit lapel of a young male model. For Victoria Pass, an associate professor of fashion history at the Maryland Institute College of Art in Baltimore, "brooches like these can change the whole look of a masculine tailored suit, turning it into something more gender-fluid."

"Here is a new way for men to express themselves," said Carlton Jones, a designer and stylist in New York. "Brooches have begun to be that statement. There's going to be a 360 from the super-casual quarantine dressing that we've become so comfortable with."

Karen Davidov founded Jewelry Library, a New York gallery, research center and gathering spot that will hold a monthlong online brooch exhibit with speaker events in May. "Men in brooches make us look at the form itself in a fresh new way," she said.

If celebrity men don't make brooches' resurgence clear enough, consider the surreally sized, 7 1/2-inch repousse gilded brass Schiaparelli dove, bearing an olive branch, that Lady Gaga wore at the presidential inauguration in January. As she stepped up to the rostrum and sang the national anthem, the applique-like dove, custom-fitted to her bust, quivered slightly -- as if coming alive, as if Gaga herself was taking flight.

"She wanted something iconic. Something emblematic of the moment," said Daniel Roseberry, creative director of Schiaparelli. He designed the dove to be worn on the left, near her heart.

"A dove carrying an olive branch. May we all make peace with each other," Gaga said later.

Not that anyone misunderstood. "Gaga is there to make statements, and that's exactly what she did," Jones said. As well as putting the world on notice that the brooch is back.

"Finally, the world of fashion has realized the importance of a piece of jewelry as a 'messenger' of large subjects such as love, peace, unity, friendship and devotion," Nichka Marobin, an art historian viewing the inauguration from Padua, Italy, wrote in an email.

Rings, earrings, bracelets and necklaces necessarily interact with fingers, earlobes, wrists and throat, posing limitations on the jeweler. But "a brooch is independent of the body," said Lori Ettlinger Gross, a jewelry historian in New York. Like a painting or sculpture, it's a nonverbal statement, a small sandwich board -- as the brooch-wearing diplomat Madeleine Albright has repeatedly demonstrated, strategically wielding pieces from her sizable collection first as ambassador to the United Nations and then as secretary of state.

She wore a giant bug pin after Russians were caught eavesdropping on the State Department, and an arrowlike pin when renegotiating the Anti-Ballistic Missile Treaty. Asked by the foreign minister if it was a missile interceptor, her response was, "Yes. We make them very small."

And that was before the age of social media. As Kristen Ingersoll, a stylist in New York, succinctly put it, "These days, a brooch is better than a tweet."

'THE ROMANCE OF THE PAST'

Like Daniel Roseberry at Schiaparelli, Alessandro Michele, creative director of Gucci, focuses on jewelry. With his aristocratic-bohemian-more-is-more-geek-chic proclivities, and the inspiration he gets from his sizable antique and vintage jewelry collection, Michele has turned out season after season of attention-grabbing brooches that cavort all over jewelry history.

Already back in 2015, Michele began showing embroidered appliques -- crossovers between brooches and clothing -- to pin or sew onto his ready-to-wear. Floral ones were strewn all over the sheer Oscar de la Renta minidress that Taylor Swift wore at the Grammys, and in Simone Rocha's fall 2021 collection.

Deanna Farneti Cera, a jewelry historian in Milan, said: "He has chosen not to address his work to well-heeled older women or men, but to millennials, which shows great intuition." These young people, she said, "are a new kind of customer, who need to find their identity in something not seen before, at least not in their lifetime."

That something, suggested Keith Penton, head of the jewelry department at Christie's in London, is "the romance of the past."

Dena Giannini, style director of British Vogue, said, "Michele has such a knack for remixing the old in a new way." Giannini noted that with him, "it's all about the piling on."

Largely out of circulation for the past 30 years, brooches raise questions large and small. For one thing, what to call them? The pedigreed-sounding "brooch" (pronounced "broach") is more of a British-ism, used for larger and more decorative pieces and for those that close with clasps. "Pin "is a catchall more often heard in the United States.

How to wear? "A lot of women as well as men are intimidated over where to place them," Giannini said. As on Page's suit jacket, the Schiaparelli dress Regina King wore at last year's Emmys was strewn with nondetachable pins; and the open decollete of Schiaparelli couture dress from its spring-summer 2021 collection is edged with feral, gold-capped, megasize, nondetachable tooth brooches (surely a nightmare to dry clean).

For those game to do the pinning themselves, the lapel is an obvious spot. Starting in the mid-20th century, it became customary to wear a brooch on the left lapel, Fasel said. "You shake hands on the right, you wear your brooch on the left," she said.

Another natural brooch spot, to which Giannini is partial, is the center of a collar. For a L'Officiel cover last year, actress Anya Taylor-Joy wore a sizable Moussaieff pearl, diamond and ruby brooch directly under her chin. Actress Lily James has been spotted wearing a small Victorian star brooch from Moira Fine Jewellery at the collar center of a starched white blouse.

"But put them wherever you please," Giannini said.

London stylist Chloe Beeney said, "You can place them at the waist, the shoulder, the neck, the bust line." Brooches are also appearing on pockets, V-neck fronts and backs, cuffs, handbags, backpacks, hair and shoes.

Just keep in mind, Ettlinger Gross said, that "brooches draw attention to wherever we pin them."

HOPE IN A PIN

The baubles have lately been gaining in popularity on e-commerce sites. Giannini attributes this "to millennials and Gen Zers moving away from fast fashion and seeking integrity as they upcycle and recycle."

Fasel said most people think of the 1980s as an era of big-statement jewels. "But when it comes to brooches, JAR made pieces that have withstood the test of time," she said. "He did a whole series of butterfly brooches in his signature pave-setting with precious and semiprecious stones." (JAR is Joel Arthur Rosenfeld, the American-in-Paris fine jeweler known by his initials.)

One such butterfly, as well as a JAR dragonfly and snake, will appear -- along with a multitude of spider, starfish, tiger, elephant, bird and beetle brooches by Boucheron, Cartier, Tiffany, Bulgari, et al -- in "Beautiful Creatures: Jewelry Inspired by the Animal Kingdom," an exhibit planned for the American Museum of Natural History when the Museum's Mignone Halls of Gems and Minerals reopens this spring. (The date has not yet been determined.) Fasel, the jewelry historian, is guest curator.

Overscale brooches, which Giannini likes to see pinned to a gown or a trenchcoat, take such old-fashioned ladylike motifs as hearts and flowers and blow them way up in size.

Flooding the market right now are pins, some as small as fingertips, displaying every personage imaginable -- including Dr. Anthony Fauci. Wearing them not only tells others whom we favor, but it is also a way of keeping them close and sharing their powers.

Among the most touching are the embellished photo portraits of the late Cicely Tyson, in ornate frames. They're part of the Afro-Luminaries collection of pins by Ashaka Givens, a milliner and designer in Brooklyn. The Tyson pins quickly have become bestsellers, along with the Nina Simones and James Baldwins.

Especially riveting among all the smalls is a vectorlike enamel pin in the shape of a syringe, displaying the words "THANKS, SCIENCE" front and center, from an outfit called Dissent Pins. As a bonus, the pin's sleek design recalls Mondrian's rectangles and squares.

"It has a tremendous life," Zucker said. "I think of it as heading upwards, expressing hope. I just love it."