Iran cites progress in bid to revive nuclear accord 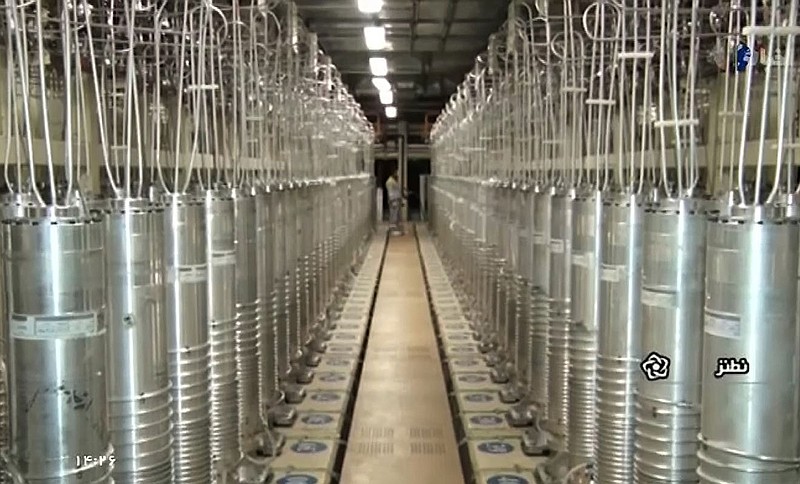 In this image made from April 17, 2021, video released by the Islamic Republic Iran Broadcasting, IRIB, state-run TV, various centrifuge machines line the hall damaged on Sunday, April 11, 2021, at the Natanz Uranium Enrichment Facility, some 200 miles (322 km) south of the capital Tehran, Iran. Iran named a suspect Saturday in the attack on its Natanz nuclear facility that damaged centrifuges there, as Reza Karimi and said he had fled the country "hours before" the sabotage happened. (IRIB via AP, File)

World powers made further progress in their efforts to end a yearslong standoff between Iran and the U.S. over the fate of the 2015 nuclear deal, as the Islamic Republic said a "new understanding" was taking shape at talks in Vienna.

Iran's lead negotiator, Deputy Foreign Minister Abbas Araghchi, said Saturday that serious disagreements remain but that his country was working on a draft text for reviving the accord that could serve as a framework for subsequent discussions.

"The drafting of the text can begin now, and the Iranian delegation has prepared and presented its text on the nuclear sphere and the lifting of sanctions," Araghchi told Iranian state TV. The U.S. hasn't yet commented on Iran's upbeat characterization.

"The path is better known, but it will not be easy path," Araghchi added. "It does not mean that differences of views have come to the end."

Earlier last week, Araghchi said Washington and Tehran had to specify the steps they would each need to take to restore the deal, including a tally of all Donald Trump-era sanctions that the U.S. would need to remove from Iran's economy.

Saturday's comments inject new hope into a process that was plunged into crisis last week after the second attack in less than a year on an Iranian nuclear facility led the Islamic Republic to begin enriching uranium at levels nearer to weapons-grade.

Iran insists that the heavy metal will be used only for medical purposes, though the West and the International Atomic Energy Agency say Tehran had an organized military nuclear program up until the end of 2003. An annual U.S. intelligence report released last week maintained the longtime American assessment that Iran isn't currently trying to build a nuclear bomb.

Adnan Tabatabai, CEO of the Germany-based Center for Applied Research in Partnership with the Orient, said Araghchi's comments showed "there are clear steps ahead." Despite the recent attacks on the enrichment site, "Iran is still sending promising signals, and they wouldn't be doing that if there wasn't something promising in the making," he said.

The U.S.' abandonment of the landmark deal in 2018 and the reimposition of sanctions by the Trump administration worsened already-tense relations between the long-standing foes. The developments also convulsed the Persian Gulf with assassinations, attacks on energy installations and tanker seizures in a major global choke point for oil supplies.

In 2019, Iran responded to Trump's "maximum pressure" strategy by gradually increasing its atomic activity beyond the limits allowed in the nuclear deal.

The Islamic Republic started enriching uranium to 60% -- though in small quantities -- for the first time Friday after last Sunday's attack on Natanz, which it blames on Israel.

Natanz houses thousands of fast-spinning centrifuges, the machines at the core of the uranium enrichment process. Even a small disruption can harm delicate internal components, nuclear experts say.

Iran on Saturday named a suspect in the attack, saying he had fled the country "hours before" the sabotage happened.

President Joe Biden has pledged to return the U.S. to the accord, but his administration has been reluctant to make any grand gestures or agree to remove sanctions all at once, something Iran insists the U.S. must do as the party that first violated the deal.

While the U.S. has yet to comment on the latest talks, which will resume today, the European Union and Russia, which along with China are trying to help the two countries choreograph the restoration of the deal and full compliance to its terms, echoed Araghchi's cautious optimism.

Enrique Mora, who's leading the talks in Vienna on behalf of the EU, tweeted that the discussions had been "intensive," and that "progress has been made in a far-from-easy task," adding that the group needed to now focus on more detailed work, without elaborating.

It is "key" that all the parties are committed to seeing the U.S. rejoin the accord and that it's fully implemented by both Washington and Tehran, said Mora.

Russia's envoy to the International Atomic Energy Agency, Mikhail Ulyanov, said the countries would continue working over the weekend and into this week as they agreed to "not waste time" and to reach a successful outcome "as soon as possible."

Iran has been negotiating with the five powers that remain in the agreement -- France, Germany, Britain, Russia and China -- over the past two weeks. An American delegation also is in Vienna, but it is not talking directly to Iran.

The Natanz sabotage and Iran's response to it have further inflamed tensions across the Mideast, where a shadow war rages between Iran and Israel.

Israeli media outlets reported that the facility had been targeted by a cyberattack carried out by the Mossad, Israel's intelligence service. Israel has not commented.

Iranian state television named the suspect as 43-year-old Reza Karimi. It showed a passport-style photograph of a man it identified as Karimi, saying he was born in Kashan, about an hour's drive north of Natanz.

The report also aired what appeared to be an Interpol "red notice" seeking his arrest. The notice was not immediately accessible on Interpol's public-facing database. Interpol, based in Lyon, France, declined to comment.

The TV report said "necessary actions" are underway to get Karimi back to Iran through legal channels, without elaborating. The supposed Interpol notice listed his foreign travel history as including Ethiopia, Kenya, the Netherlands, Qatar, Romania, Turkey, Uganda and the United Arab Emirates.

According to Islamic Republic of Iran Broadcasting, Karimi speaks both Farsi and English. It did not disclose his affiliation, if any, with a foreign intelligence service.

The report did not elaborate on how Karimi would have gotten access to one of the most secure facilities in the Islamic Republic. However, it did for the first time show authorities acknowledging that an explosion struck the Natanz facility.

There was a "limited explosion of a small part of the electricity-feeding path to the centrifuges' hall," the TV report said. "The explosion happened because of the function of explosive materials, and there was no cyberattack."

Initial reports in Israeli media, which maintain close relations to its military and intelligence services, cited a cyberattack.

The Iranian state TV report also said there were images that corroborated the account of an explosion rather than a cyberattack, but it did not broadcast those pictures.

The report also showed centrifuges in a hall, as well as what appeared to be caution tape at the Natanz facility. In one shot, a TV reporter interviewed an unnamed technician who was shown from behind -- likely a safety measure, as Iranian nuclear scientists have been assassinated in suspected Israeli-orchestrated attacks in the past.

"The sound that you are hearing is the sound of operating machines that are fortunately undamaged," he said, with the high-pitched whine of the centrifuges heard in the background. "Many of the centrifuge chains that faced defects are now under control. Part of the work that had been disrupted will be back on track with the round-the-clock efforts of my colleagues."

Information for this article was contributed by Golnar Motevalli and Arsalan Shahla of Bloomberg News (TNS); by Nasser Karimi, Jon Gambrell, Geir Moulson and staff members of The Associated Press; and by Kareem Fahim of The Washington Post.