Kristi Moody fought and survived cancer years ago and that experience has fueled her continuing work against the disease while serving as general counsel at Windstream. by Werner Trieschmann | April 18, 2021 at 8:52 a.m. 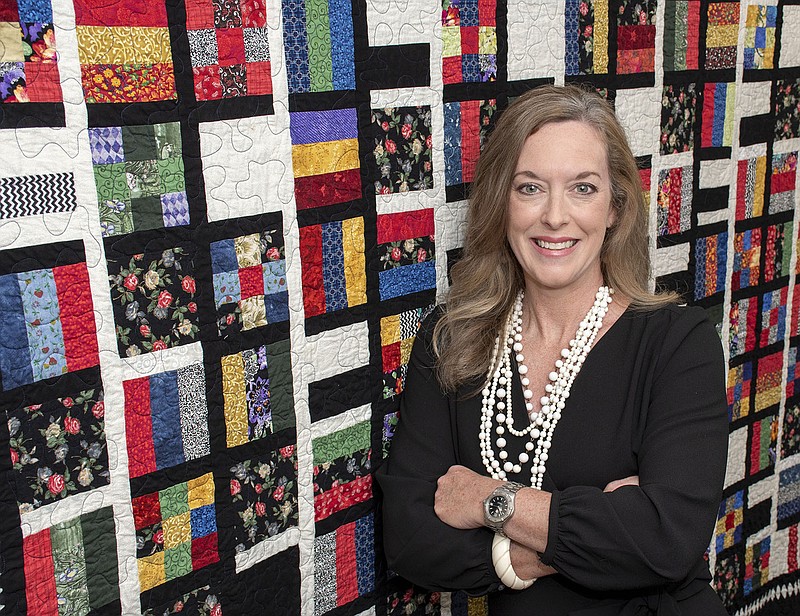 Advances are being made. Cancer is not what it once was but it's still a bully. A diagnosis of the disease is chilling and in an instant turns lives upside down, spoils plans and wrecks otherwise healthy bodies.

A diagnosis of cancer can also make an enemy of the disease. Cancer did itself no favors by messing with Kristi Moody.

Moody's news of breast cancer came at the young age of 33. She was a mother with a 2-year-old daughter and, as she says, "no family history of cancer."

"I had run two marathons. I was in training for my third marathon," Moody recalls. "The diagnosis was the most shocking thing I could have heard."

That was 17 years ago. Since that fateful day in the doctor's office -- and after six rounds of chemotherapy and 35 rounds of radiation -- Moody has had another child and continues to work as a lawyer, currently serving as general counsel for Windstream Communications.

Over that time, Moody has taken on the fight against cancer in various ways. She was heavily involved with the Susan G. Komen Foundation and was chair of its 2012 Race for the Cure. This spring she is stepping up to be board chairman for Home for Healing, a Little Rock nonprofit.

Home for Healing is a 13,500-square-foot house across from UAMS offering free to minimal cost lodging to parents with babies in the Neonatal Intensive Care Unit and to cancer patients and their caregivers.

"I am passionate about this organization as it has a simple, straightforward mission," Moody says. "I am motivated by my own cancer experience, as I was very fortunate to live 15 minutes from all of my doctors and treatment centers. So many others are not situated locally, and it is a tremendous burden to find and pay for lodging for extended periods, all while facing a significant life challenge. Home for Healing works to fill the gap."

Home for Healing is happy to have a fighter like Moody in its corner.

"She understands what the cancer patients are going through," says Kristin Trulock, executive director at Home for Healing. "She helps me help them. She hasn't been on the board long but she's already brought in more sponsorship dollars and new companies and volunteers."

Warren, the small southeastern Arkansas town that's home to the famed Pink Tomato Festival, was Moody's home for the first 17 years of her life. Her family included her parents and an older brother.

"My dad owned an automotive garage and worked as a mechanic his whole life," Moody says. "Some years after I was born, my mom went to work at the local YMCA and worked there for many years. They had typical small-town jobs."

Moody considered herself a tomboy. She was free to ride her bike and spent a lot of time outdoors on a swing outside of her house.

"If it was warm outside, I was outside," Moody remembers. "There weren't any girls in the neighborhood. I was running around by myself."

"I had a wonderful childhood," Moody says. "I had supportive parents."

Among the many highlights of her younger life, Moody mentions being a cheerleader, which found her on the sidelines almost as soon as she could walk and continued through high school and college. Pride in being a cheerleader is still evident as Moody describes how much time she devoted to it.

"I started cheering for the Pee Wee leagues. [Cheerleading] has a lot of negative connotations and that makes no sense to me. It was a lot of fun. I liked watching people I knew playing football or basketball and I liked watching the sports. Warren only had one junior high and one high school. As a cheerleader, we were there for community events and the parade."

In class, Moody gravitated toward subjects of English and history and "did fine" in math and science classes but didn't see her future there. It was clear that Moody would be attending college, though her family history lacked college grads.

"It was a given that I would go to college," Moody says. "Neither of my parents went to college and they didn't have siblings that went either. In fact, my brother was a first grandchild on either side to attend college. My mom was very focused on education. I don't ever recall it being up for discussion or debate."

Louisiana Tech, about two hours from Warren, was Moody's pick for the next step in her education.

"I liked the thought of going out of state, though Ruston, Louisiana, wasn't vastly different from where I lived."

As for nervousness about leaving Warren, Moody felt quite the opposite. Her small town had been a place of support and familiarity. It was time to experience something different.

"I was so ready to go," Moody says. "I had zero anxiety about attending college. I was ready for the next adventure."

Moody did not know any lawyers growing up. There wasn't a relative or family friend who could pass on knowledge of the ins and outs of a law practice or spending time in court. Nevertheless, early on at Louisiana Tech Moody was fairly certain she would be headed to law school once her bachelor's degree was completed.

"One day in the 10th or 11th grade, I was in a class that was almost over and we started talking about careers," Moody says. "The teacher told me she could always see me as a lawyer. She could see me walking in a courtroom and talking to jurors. She said I was assertive. I was always able to express my opinion."

The other major development for Moody during her days at Louisiana Tech was a blossoming romance with her future husband, Scott.

"He was different [from] any other boys I knew growing up," Moody says. "He was an Air Force brat. His father was a colonel in the Air Force. He is one of the wittiest people and is so funny. He was unique and cool. He was the opposite of anybody I had ever hung out with."

After college, there was no time off for Moody and she went straight to the University of Arkansas at Little Rock's Bowman Law School. The daunting first year of law school proved to be everything Moody had heard.

"It was a difficult transition," Moody admits.

Whatever doubts Moody had about her ability to finish and take home a law degree were superseded by her concern about finding work once she was done. Coming from Warren, Moody keenly felt her fish-out-of-water status.

"I didn't have a family member who had been through [law school]," Moody says. "I didn't have a network of friends or people I knew in Little Rock. I was really focused on getting the grades I would need to get a job."

As it turned out, Moody didn't need to worry about not having a place to practice law. She was quickly brought on board at Wright, Lindsey and Jennings and ended up working there for 11 years. Moody defended personal injury cases and, on occasion, those cases would end up court. Those days in the courtroom Moody was anxious but excited to present her case to a jury.

"I was extremely nervous [when a case went to court]," Moody says. "It was fun, too. You don't know what a jury is going to do. You don't know how witnesses you've prepped are going to respond when they get on the stand. Some come off as being evasive. You try to make them feel comfortable. Type A personalities like me have to struggle with things not always going like you plan. It is fun to argue and have objections and respond to objections."

"I oversee all the disputes involving the company," Moody says. "My job is to help mitigate risks and support the senior executives here. We have about 11,000 employees here and at any point one of those can have an issue and reach out to us. In our office we attempt to make the best decision for the company."

Those who have worked beside Moody marvel at her strength and ability to keep several balls in the air at the same time.

"We have worked together for about 15 years, basically since Windstream was formed," says Mary Michaels, chief human resources officer for Windstream. "[Kristi] is such an inspiration. She balances so much and excels in so many aspects of her life. She is extremely tenacious. She will roll up her sleeves and get it done. She has a really big role here. It's a complex role with the industry we are in. She handles it very well."

Her demanding job doesn't completely lock down her time. Though Moody admits she resisted the idea of running a marathon when it was first proposed by her husband, she quickly understood the benefits after running her first in Austin, Texas.

"I figured out it was a fun way to get in shape," Moody says. "It was a fun hobby. It's a nice way to clear your head. If you get up early, it's a cool way to see a city before everybody wakes up."

Moody is seen as especially crucial for the development of Home for the Healing.

Trulock notes that Home for the Healing is "literally across the street from UAMS but nobody knows that." There are 10 rooms for cancer patients and their caregivers.

"We knew that [Kristi] had worked with the Komen organization on a strategic plan," Trulock says. "That is something we want. Getting a strategic plan together is not a talent a lot of people have."

Assistance like the kind that Home for Healing offers is what Moody credits in helping her beat back cancer.

"I had an extremely great support group," Moody says. "I had a great network of friends. Wright, Lindsey and Jennings, where I worked, supported me. I had an excellent team of physicians."

What kind of attitude does a person have to have to overcome a disease that is terminal for so many?

• A THING I LEARNED AT A VERY EARLY AGE THAT'S STAYED WITH ME TO THIS DAY: Hard work is essential to success.

• WHEN I HAVE FREE TIME, YOU CAN FIND ME: Hanging out with my neighborhood friend group that includes four families; I adore these dear people and am so fortunate to be part of their lives.

• ADVICE I WOULD GIVE MY YOUNGER SELF IF I COULD: Trust yourself and take risks; work to develop enough confidence to focus less on what others think and more on what you think; and it is OK to fail, as long as you are putting in the work and doing your best.

• A GREAT MEAL HAS TO INCLUDE: Amazing dining companions and conversation, as atmosphere is a significant part a great meal.

• THE FOUR GUESTS AT MY FANTASY DINNER PARTY: My great-grandparents. I would love to hear their life stories and chat about their experiences.

• ONE WORD THAT SUMS ME UP: Determined 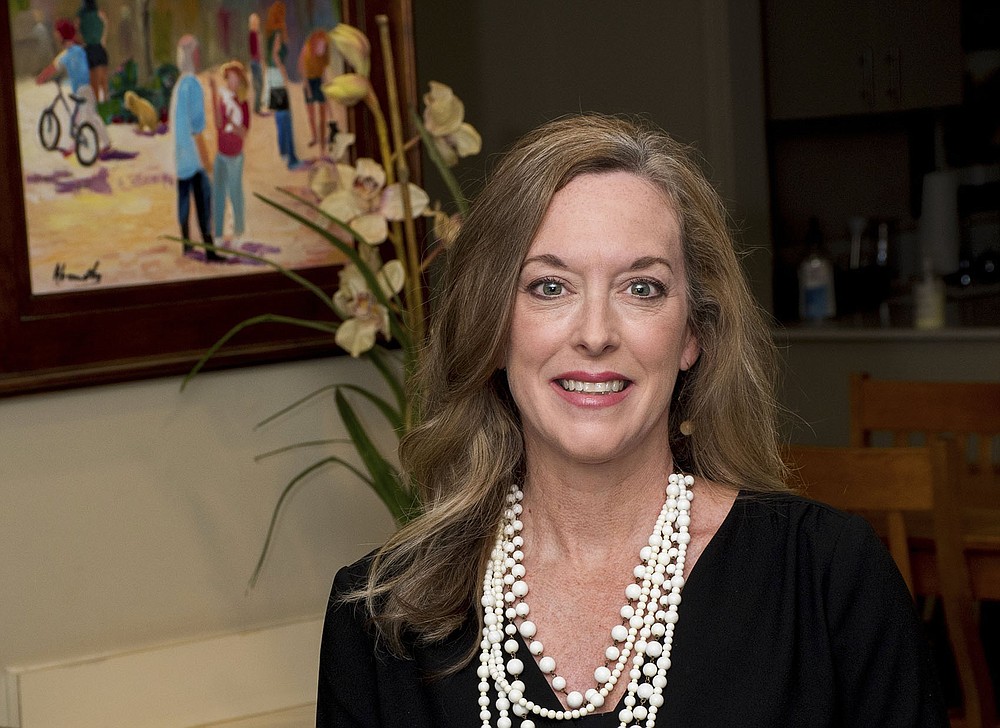 “I had run two marathons. I was in training for my third marathon. The diagnosis was the most shocking thing I could have heard.” -Kristi Moody (Arkansas Democrat-Gazette/Cary Jenkins)
ADVERTISEMENT