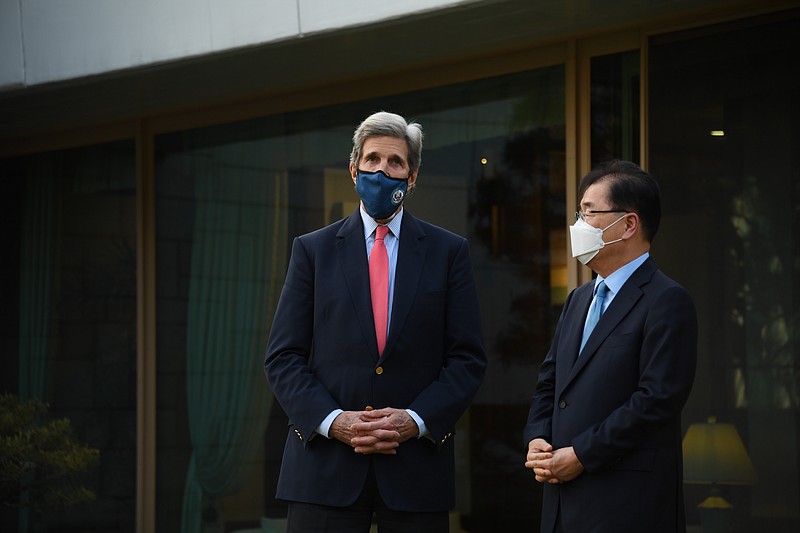 Kerry arrived in South Korea after a four-day visit to China, where he held private meetings with senior Chinese officials in Shanghai.

While Kerry's discussions with South Korean Foreign Minister Chung Eui-yong were focused on Biden's climate meeting and another video summit on environmental issues that South Korea will host in May, Chung also conveyed Seoul's "serious concerns" over Japanese government plans to start releasing treated radioactive water from the wrecked Fukushima nuclear plant into the sea in two years.

Chung also requested U.S. help for South Korea's efforts to secure more coronavirus vaccines as it wrestles with a slow vaccine rollout and a steady rise in infections, South Korea's Foreign Ministry said. The ministry didn't release any specific comments made by Kerry during the meeting.

Chung and Kerry agreed the countries should cooperate to create "mutual synergy" between the virtual summits hosted by each country in the coming weeks, which would help set up the U.N. Climate Change Conference scheduled for November in Scotland, the ministry said.

Arriving for a dinner meeting at Chung's official residence in Seoul, a mask-wearing Kerry bumped forearms with Chung and wrote in a guestbook: "Thank you so much for Korea's leadership on the climate crisis."

Kerry and Chung had spoken over the phone twice last month to discuss the countries' cooperation on climate change and to exchange views on the U.N. Climate Change Conference, according to Chung's ministry.

Kerry's visit to South Korea takes place at a time when the Biden administration also is stepping up efforts to coordinate action with South Korea and Japan to cope with China's growing influence and North Korea's nuclear threat.

Three-way cooperation among Washington, Seoul and Tokyo had declined during the Trump administration as the allies feuded over wartime history, trade and military issues that sank their relations to postwar lows.

South Korean President Moon Jae-in said last month that he was eager to repair relations with Tokyo to build "future-oriented ties," but there are now fresh tensions over Japan's approving the release of radioactive water from Fukushima.

While Japan says the water will be treated and diluted so it won't pose a health threat to humans, South Korea has described the plan as "absolutely unacceptable" and urged Tokyo to provide transparent information on how the water is being treated and how its safety is being verified.

The U.S. State Department had said Kerry's visits to China and South Korea were to discuss "raising global climate ambition" ahead of Biden's climate meeting.

Biden has invited 40 world leaders, including South Korea's Moon and Chinese head of state Xi Jinping, to participate in a virtual climate summit Thursday and Friday. The United States and other countries are expected to announce more ambitious national targets for cutting carbon emissions and pledge financial help for climate efforts by less-wealthy nations. 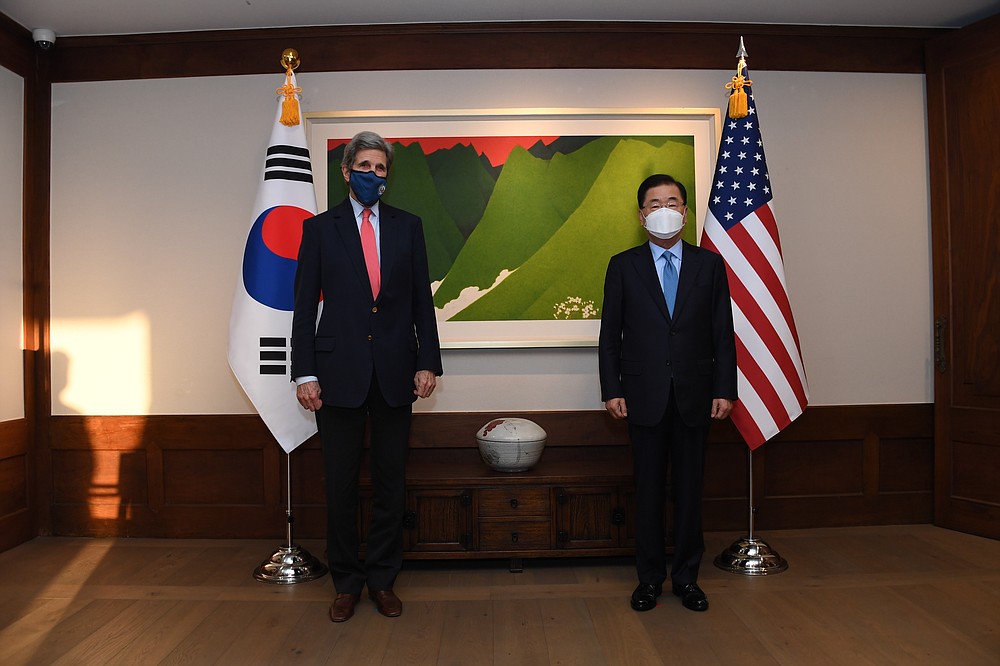