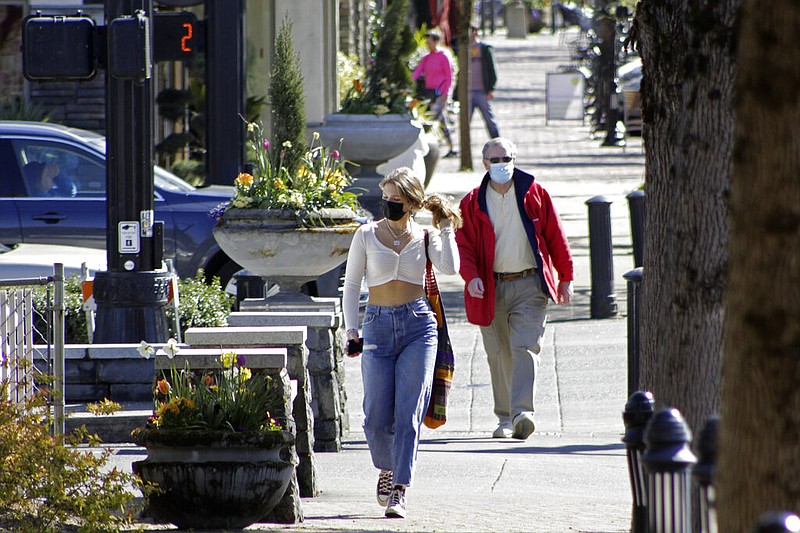 Residents wearing masks walk through downtown Lake Oswego, Ore., on Sunday, April 11, 2021. Tens of thousands of Oregon residents are angry about a proposal to make permanent an emergency rule that requires masks and social distancing in the state's businesses and schools to prevent the spread of covid-19. (AP/Gillian Flaccus)

PORTLAND, Ore. -- As states around the country lift coronavirus restrictions, Oregon is poised to go the opposite direction. Alaska, meanwhile, will begin offering vaccinations at the airport as a tourism draw, while several states have lifted mask mandates and in Texas businesses have reopened at 100% capacity.

The wide-ranging policies illustrate how differently U.S. states are reacting to the current stage of the pandemic and their own regional circumstances.

Alabama, Iowa, Mississippi, Montana, Texas and others have lifted mask mandates, and some states never implemented them.

In Oregon, a top health official is considering indefinitely extending rules requiring masks and social distancing in all businesses in the state. The proposal would keep the rules in place until they are "no longer necessary to address the effects of the pandemic in the workplace."

Michael Wood, administrator of the state's department of Occupational Safety and Health, said the move is necessary to address a technicality in state law that requires a "permanent" rule to keep the current restrictions from expiring.

But the idea has prompted a flood of angry responses, with everyone from parents to teachers to business owners and employees decrying government overreach.

Opponents also are upset that government officials won't say how low Oregon's covid-19 case numbers must go, or how many people would have to be vaccinated, to get the requirements lifted in a state that's already had some of the nation's strictest safety measures.

"When will masks be unnecessary? What scientific studies do these mandates rely on, particularly now that the vaccine is days away from being available to everyone?" said state Sen. Kim Thatcher, a Republican. "Businesses have had to play 'mask cop' for the better part of a year now. They deserve some certainty on when they will no longer be threatened with fines."

Wood said he is reviewing all the feedback to see if changes are needed before he makes a final decision by May 4, when the current rules lapse.

Oregon, a Democrat-leaning state, has been among those with the country's most stringent covid-19 restrictions and now stands in contrast with much of the rest of the nation as vaccines become more widely available.

In January, Virginia became the first in the nation to enact permanent covid-19 workplace safety and health rules.

"While the end of this pandemic is finally in sight, the virus is still spreading -- and now is not the time to let up on preventative measures," said Democratic Gov. Ralph Northam.

It dovetails with actions implemented by Democratic Gov. Kate Brown, using a state-of-emergency declaration, requiring masks in public statewide -- and even outside when 6 feet of distance can't be maintained -- and providing strict, county-by-county thresholds for business closures or reductions in capacity when case numbers rise above certain levels.

More than a third of Oregon's counties are currently limited to indoor social gatherings of six people, and the maximum occupancy for indoor dining, entertainment and gyms is 25% capacity or 50 people, whichever is less. Many schools are just now reopening after a year of online learning.

The workplace rule is "driven by the pandemic, and it will be repealed," Wood said. "But it might not need to go away at exactly the same time the state of emergency is lifted," he said, referring to Brown's executive orders.

Facing pandemic frustration and deprivation, the issue has gained a lot of attention. A petition on change.org opposing the rule gained nearly 60,000 signatures and spread on social media, drawing even more interest. More than 5,000 public comments were sent to the agency, smashing its record of 1,100.

Justin Spaulding, a doctor at the Cataract & Laser Institute of Southern Oregon, is among those who raised concerns about the proposal in public comments.

"I do not understand these new guidelines for business. If we put these into effect we will only continue to blunt the recent drop in business," he wrote. "We have a large subset of patients that are unwilling (or) hostile with the current guidelines, and making them permanent will only make it worse."

For Thatcher, the GOP lawmaker, the most concerning part is "[the safety office's] lack of clarity" on when the rules will be lifted.

Officials said they have every intention of repealing the rules, and that decision will be based on a complex mix of factors, including case counts, vaccination rates, case severity and advice from the Oregon Health Authority.

"It will be a complicated assessment when we do it, and I would say it is impossibly complicated to do in advance," Wood said.

In Mississippi, the top health official said he does not think political party affiliation has an impact on people's willingness to get a vaccine.

State Health Officer Dr. Thomas Dobbs said he talks with equal numbers of Democrats and Republicans who are unsure about getting shots.

What he does see making a difference: socioeconomic status and education.

"It seems to be that folks who are more educated and have higher incomes are way more likely to want to get it," Dobbs said Friday during an online conversation hosted by the Mississippi State Medical Association. "If you're in the top income bracket, and you're in the top education bracket, you're like 95% going to get vaccinated."

There are many factors that could affect whether a person has vaccine access: lack of transportation, a prohibitive work schedule, no child care. All those issues are more likely to affect poorer Mississippians.

Dobbs said recently that the state Health Department is beginning "an aggressive push" in the 18 most undervaccinated counties, all of which have high poverty levels. He said the department is planning pop-up vaccination events and mobile clinics, as well as going door to door with vaccination information.

In Alaska, Gov. Mike Dunleavy said Friday that vaccinations would be made available at key airports in the state starting June 1, in unveiling plans aimed at bolstering the state's pandemic-battered tourist industry.

"The idea is that we have access to vaccines, so why not use them? So this is what we're saying to our tourists: If you come to Alaska -- and this will start on June 1 -- if you come to Alaska, you get a free vaccination," said Dunleavy, a Republican.

He outlined plans for a national marketing campaign aimed at luring tourists using federal aid money and said the vaccination offering is "probably another good reason to come to the state of Alaska in the summer."

Dunleavy and other state leaders have been pushing to let large cruise ships return to Alaska after restrictions kept them away last year, hitting tourism-reliant businesses and communities hard.

He said the state has not ruled out suing the federal government, as Florida has.

About 40% of those eligible for vaccination in Alaska, all those 16 or older, are fully vaccinated, according to the state health department, and officials have been looking for new ways to encourage more people to get shots.

Heidi Hedberg, the state health department's Division of Public Health director, said there is an ample supply of vaccine. She said the airport program will offer the two-dose Pfizer or Moderna shots.

Hedberg said officials are hearing from other states that there is "a lot of vaccine availability," so if travelers are not still in Alaska when it's time for their second dose, they can follow up at a clinic or with their provider when they return home.

The state plans to offer vaccinations at airports in Anchorage, Fairbanks, Juneau and Ketchikan.

"The vaccination clinics are actually going to be outside of security. And this is the beauty: So for Alaskans that are coming to welcome their family members that live out of state, they can get vaccinated at the airport," she said.

Hedberg said officials will do a soft rollout at the Anchorage airport in late April to work through logistics. It will be for Alaskans traveling in or through the airport, she said.

Vaccinations are to open more widely, to anyone passing through, on June 1.

In Canada, Ontario's premier on Saturday retracted restrictions that banned playgrounds and allowed police to require anyone not at home to explain why they're out and provide their addresses after a backlash from police forces, health officials and the public.

The pandemic restrictions imposed by Canada's most-populous province immediately ran into opposition as police departments insisted they wouldn't use new powers to randomly stop pedestrians or motorists and health experts complained the rules focused on outdoor activities rather than more dangerous indoor settings.

Ontario Premier Doug Ford's government had announced on Friday the outdoor restrictions for which tickets could be written for violations.

But Ontario Solicitor General Sylvia Jones said Saturday that officers no longer will have the authority to stop any pedestrian or vehicle to ask why they are out or request addresses.

But Jones said police may require a person to provide information to ensure they are complying with restrictions if the officer has reason to suspect the person is participating in an organized public event or social gathering.

Earlier, at least a dozen police forces throughout Ontario, including in the capital, Toronto,, said there would be no random stops of people or cars.

"We are all going through a horrific year of COVID-19 and all associated with it together. The (department) will NOT be randomly stopping vehicles for no reason during the pandemic or afterwards," Halton Police Chief Steve Tanner tweeted.

Ford's Friday announcement limited outdoor gatherings to those in the same household and closed playgrounds and golf courses. The decisions sparked widespread criticism in a province already on lockdown. Restaurants and gyms are closed, as is in-class schooling. Most nonessential workers are working from home.

On Saturday, Ford retracted the ban on playgrounds, but tweeted that the ban on "gatherings outside will still be enforced."

Ford complained about crowded parks and playgrounds, but at Friday's news conference did not mention workplaces considered essential, such as factories, where the virus is spreading.

"What we got: the closure of outdoor amenities, which we need to keep people safe and healthy."

"I have yet to intubate a COVID patient who had become infected from being in a playground," tweeted Dr. Ian Preyra, who works at Joseph Brant Hospital in Burlington, Ontario.

"Warehouse worker, truck driver, construction worker ... not one of my COVID patients today acquired this at the park. They are angry and they have no voice. Shameful," tweeted Dr. Aman Sidhu, a lung doctor in Toronto.

Information for this article was contributed by Sara Cline, Becky Bohrer, Rob Gillies and staff members of The Associated Press; and by James Brooks of the Anchorage Daily News (TNS). Cline is a corps member for The Associated Press/Report for America Statehouse News Initiative -- a nonprofit national service program that places journalists in local newsrooms to report on undercovered issues. 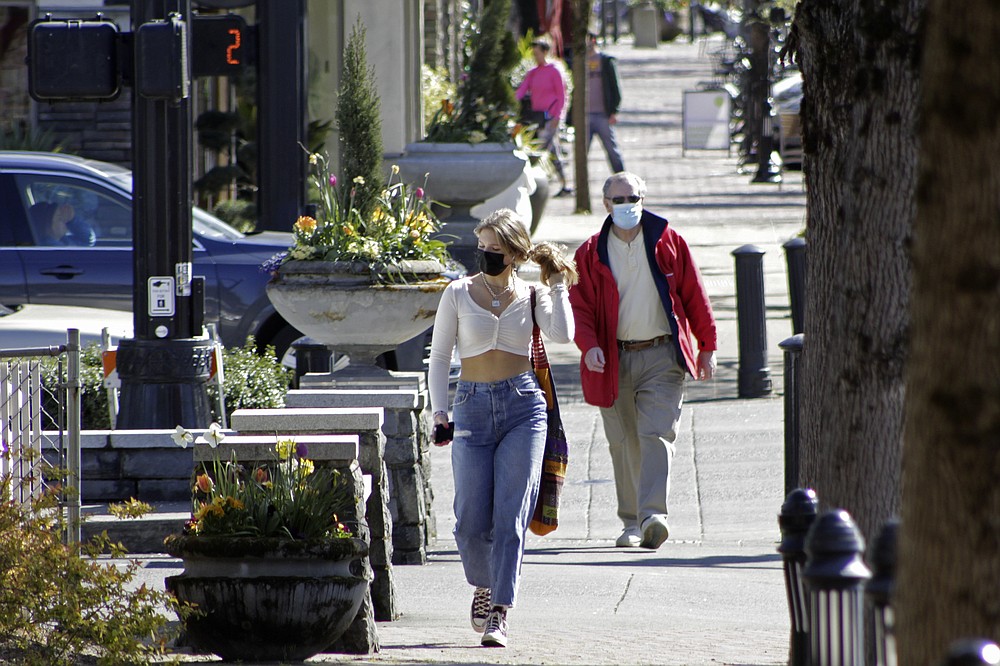 Residents wearing masks walk in downtown Lake Oswego, Ore., on Sunday, April 11, 2021. Tens of thousands of Oregon residents are angry about a proposal to make permanent an emergency rule that requires masks and social distancing in the state's businesses and schools to prevent the spread of COVID-19. Opponents worry about government overreach and fear that state officials won't remove the mask requirements for businesses even after threat of the virus has receded if the emergency rule becomes permanent. (AP Photo/Gillian Flaccus)
ADVERTISEMENT