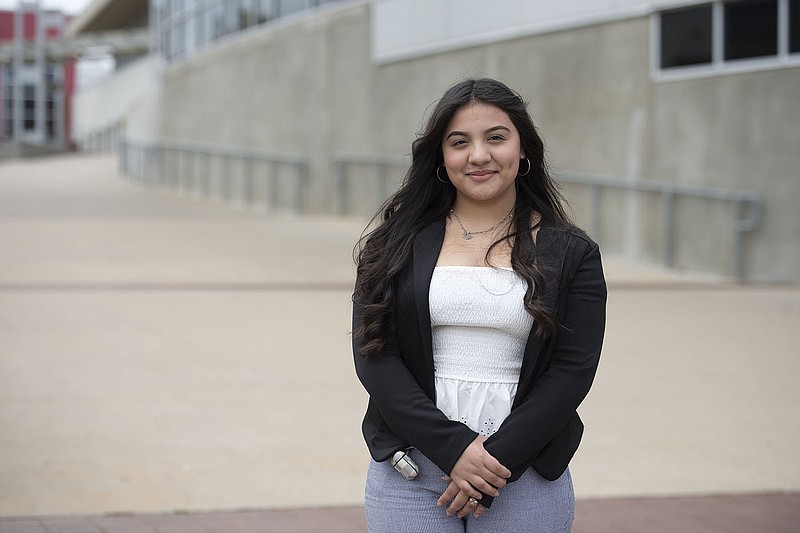 Reyna Garcia, a senior at Heritage High School in Rogers, has been accepted by some of the most prestigious universities in the U.S., including Harvard, Duke and Rice. (NWA Democrat-Gazette/J.T. Wampler)

ROGERS -- A video shows Reyna Garcia cupping her hands over her mouth, letting out a gasp and screaming when she learned she'd been accepted into Harvard University. Then she begins to sob with joy.

Harvard is not the only school vying for Garcia, however. The Heritage High School senior has been accepted to 17 other universities, including some of the nation's most selective.

It's likely that many, if not all, of those schools will cover her tuition, although it's too early to say for sure, according to Carla Fontaine, who runs the Rogers School District's Honors Academy.

"I've never seen anything like it," Fontaine said about the number of college acceptances Garcia has received.

The Rogers Honors Academy is a college counseling program designed to help highly motivated students find their passion, explore career possibilities and find the best college for them, according to the district.

Eight of the schools that accepted Garcia are among the top 25 universities in the country, as ranked by U.S. News & World Report. Harvard, in Cambridge, Mass., is ranked second and had a fall 2019 acceptance rate of 5%, according to U.S. News.

Garcia, 17, hasn't decided which school she'll attend. A number of factors will play into her decision, she said, including location, programs offered and the student-to-faculty ratio.

She is interested in a career in international relations.

"I was hoping that after college I could move to New York City and work at the United Nations," she said. "I would love to work as an ambassador or a diplomat."

Garcia, a native of Mexico, came to America with the goal of learning English and going to college here, Fontaine said.

"And it was kind of tough because she left her family in Mexico and came here and lived with an uncle and had some rough times and was homesick," Fontaine said.

As a child, Garcia had visited relatives in America almost every summer. She dreamed of moving to America.

"My parents didn't want me to move," Garcia said. "I begged them for like six years."

She told her parents she wanted to stay in the United States during one of her summer visits when she was 11 years old. They relented.

She lived at first in the small town of Dyersville, Iowa, where she was the only Hispanic student in her school. It took her about two years to become proficient in English, Garcia said.

She spent her ninth-grade year back in Mexico before returning to Iowa for her sophomore year. She moved to Rogers for her last two years of high school starting in August 2019, she said. Her mother joined her in October 2019, and her father joined them just a few weeks ago.

She has balanced a rigorous schedule of classes with a job throughout high school. She was in the habit of working 30-40 hours per week as a tutor for Kumon Math and Reading center in Bentonville until recently when she was able to scale back her hours.

"It was really difficult, but I would say it was definitely worth it," she said.

Garcia founded a club at her school last fall to help support English language learners. Multilingual students -- most of whom are natives of other countries -- mentor other students who are still developing their English fluency.

The club has more than two dozen mentors. They meet individually with their charges once a week, Garcia said. Her goal is to inspire them.

"It is possible to become proficient and do great things. You don't have to stay shy for the rest of your life," she said.

Among the 2,000 students at Heritage, nearly half come from families for which English is not their native language, according to state data.

Margaret Elenbarger, a Heritage High School teacher, called Garcia one of the most intellectually gifted people she has ever taught.

"She will leave a legacy in our school that creates a stronger community and higher academic success for her peers," Elenbarger wrote in an email. "She embodies the Rogers Public Schools ideal that all belong, all learn and all succeed."

The Rogers Honors Academy launched in 2016. District graduate enrollment in top colleges like Harvard has increased significantly, from 20 in 2016 to 62 in 2020, according to Fontaine.

Jesus Ballesteros, a senior at Rogers' New Technology High School, also has a big choice ahead. He has been accepted to Princeton University -- the No. 1 school in the U.S. News rankings -- as well as Stanford, Vanderbilt and Emory universities, Fontaine said.

"I think the more students see their peers getting into top schools, the more they kind of branch out and apply themselves because they see it as possible," Fontaine said. "Every year it feels like we're seeing more and more students going for some of the real competitive programs because they're seeing that those are attainable."

Here’s the list of schools that have offered admission to Reyna Garcia: