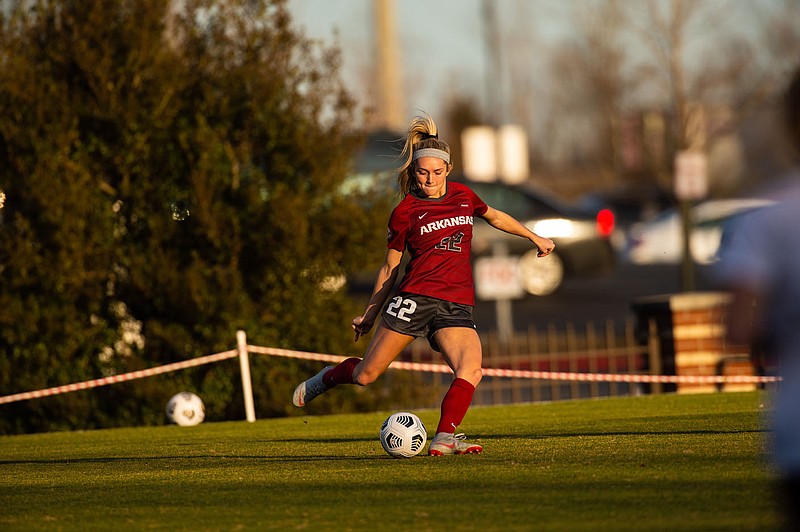 Arkansas senior forward Parker Goins has been a key figure in helping the Razorbacks build one of the top women's soccer programs in the Southeastern Conference. (photo by Walt Beazley)

FAYETTEVILLE -- University of Arkansas senior forward Parker Goins called this season of the pandemic "a little funky," but she said the Razorbacks women's soccer team is ready for postseason play.

The Razorbacks, ranked No. 8 in the latest United Soccer Coaches Poll, will hear their NCAA Tournament outcome today even though there's no suspense about whether they will make the 48-team field.

Arkansas (11-3) will likely be a top-16 seed, despite playing just four matches since losing in the SEC Tournament final on Nov. 22.

The NCAA decided to shift the women's soccer tournament to the spring because of the pandemic just like it did with women's volleyball. The spring is normally a training period for both sports. In addition, the tournament field was shaved from 64 to 48 teams like volleyball.

"We felt like we won our NCAA Tournament bid in the fall," said Arkansas Coach Colby Hale, whose team won the SEC regular-season title. "Like everything this year, down's up, up's down. And we just have to try to figure out how to do it.

"I'm pretty proud of the players. I think our RPI is number three in the country right now. We're in a pretty good place and excited to play in the NCAA Tournament."

Hale also said the team has faced adversity in the spring with injuries but could be at full strength come tournament time.

Goins, a two-time All-SEC first-team selection, said Hale has done a good job of balancing practice with time away from soccer for players, and now the team is ready for the postseason.

"We got a spring break, and we got some days to focus on ourselves and school," Goins said. "Honestly, I think we're ready."

The players don't know many details yet about staying in a bubble-type atmosphere in North Carolina, Goins said. The tournament matches will be played at nine different sites in the state beginning April 27 and finishing with the final on May 17.

Hale said he and others would be closely monitoring the NCAA Volleyball tournament, which is currently being held in Omaha, Neb., to get a sense of protocols.

Goins said the thought of staying in North Carolina for nearly a month is odd, especially since their longest previous road trip was about 10 days for the SEC Tournament.

"It's crazy just knowing that and we have finals coming up, too" Goins said. "I've loved it here. I've grown as a player and a person. We've made some history by beating some really great teams."

Hale, who is in his ninth season at Arkansas, has built the program into one that's respected across the country. Today would be seven NCAA Tournament bids in the last eight years and five in a row for the Razorbacks. They are also hopeful of the top-16 seed, which would give them a first-round bye.

The Broken Arrow, Okla., Goins turned down a scholarship offer from the University of North Carolina, a national power, to come to Fayetteville. She's never regretted that decision.

"Coming into a program that just starting up, it really cool to say I was a part of all that," said Goins, who has already said she will return in the fall for her final season of eligibility despite being drafted by Racing Louisville FC of the National Women's Soccer League in January.

Goins said the team has banded together despite the challenges of the pandemic and soccer has been a common outlet.

"It was tougher creating bonds because we weren't able to hang out as much," Goins said. "But when we were in soccer, we were playing for each other and that's what ultimately helped us win. It was kind of like a breakaway to come play soccer, the sport we love.

"Coach Hale said, 'this is the time where it's gonna get tougher, we're gonna win the covid championships and that's what we did."

The SEC chose to play the bulk of its schedule in the fall, while other conferences shifted theirs to the fall like the NCAA Tournament. Hale acknowledged nobody really knows which teams will benefit and which will be hurt.

"It's gonna be fascinating," Hale said. "We've never done this before. In some ways, you may be fresher. When you play an NCAA Tournament at the end of an SEC season. That's a grind.

"Are we fresher? Maybe. Are we rusty? Maybe. I don't think we totally know.We're gonna play as many games as we can and try to win them and we like our team." 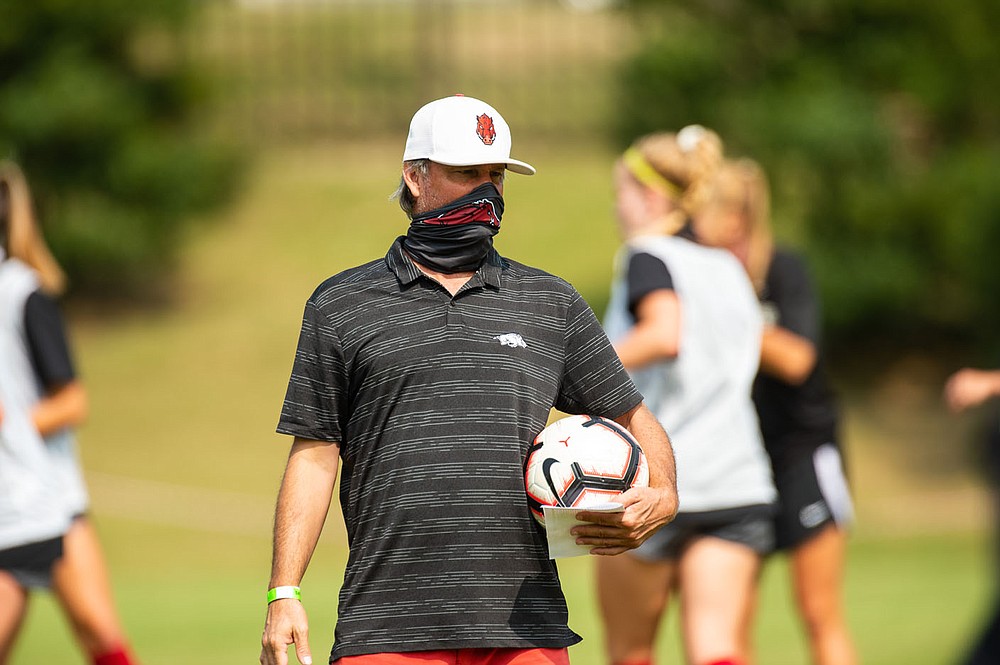