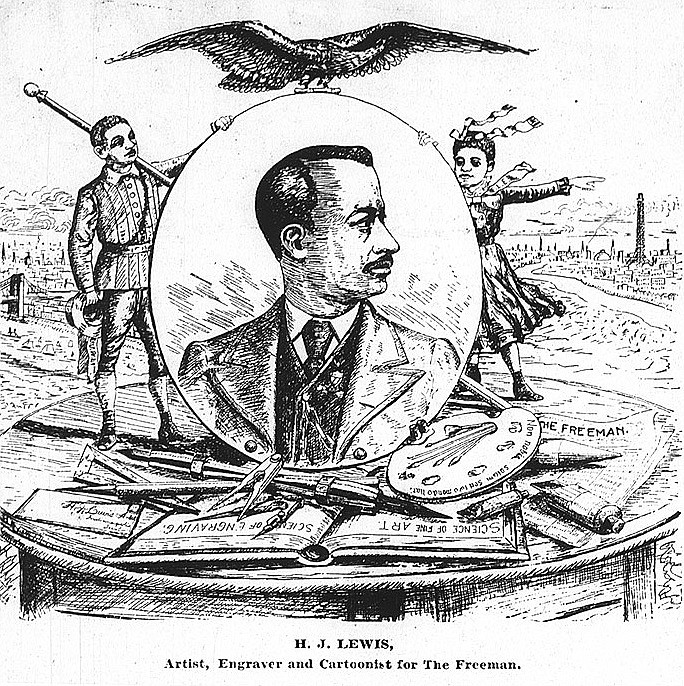 Henry Jackson Lewis' self portrait. (Special to The Commercial/Library of Congress)

From less than auspicious beginnings, Henry Jackson (H. J.) Lewis found a way to make a living as an artist. Along the way, he became the first African American political cartoonist whose biting criticism of racial injustice ruffled more than a few feathers.

Can a political cartoonist help bring about racial justice? If he were still alive, Lewis might have something to say about this.

Born into slavery in 1838, Lewis didn't have an easy life. As a small child, he fell into a fire, maiming his left hand and blinding his left eye. Though that early accident crippled him and changed his appearance, it didn't diminish his drive.

Little more is known about his early life, but the trail picks back up in the early 1870s after Lewis moved to Pine Bluff. In addition to working as a laborer, he had started to draw, and his artistic talent blossomed during his time in Pine Bluff. By 1879, Lewis was finding success as a freelance artist, selling drawings of city scenes, Arkansas River scenes, and Mississippi floodwaters to national publications such as Harper's Weekly.

By late 1882, Lewis was working as an assistant to Dr. Edward Palmer of the Smithsonian Institution who was studying prehistoric Native American land mounds in the south. Lewis accompanied Dr. Palmer on his expeditions and produced at least 34 pencil drawings (including a few valuable maps) of mounds, though he did not receive formal acknowledgment for his work until nearly 100 years after he completed it.

In January 1889, Lewis moved from Pine Bluff to Indianapolis where he began working as a political cartoonist and illustrator for The Freeman, the first national African American illustrated newspaper. Lewis' early work for The Freeman covered various topics, particularly around race.

The works that got him noticed were those deeply critical of President Benjamin Harrison and his Republican administration for their failure to support job opportunities for Blacks and for their refusal to acknowledge the importance of racism. One Lewis cartoon of Harrison, unconscious and sitting on a throne, as Black men blared bugles at him, sparked controversy, especially in Indiana where Harrison had been U.S. senator before being elected President.

Lewis' cartoons captured the energy behind the drive for racial justice, an energy that would simmer under the weight of Jim Crow for nearly a century before erupting into the Civil-Rights movement in the 1960s and the Black Lives Matter movement today.

You might think of Lewis as the Colin Kaepernick of his time. Just as Kaepernick disappeared from the NFL, Lewis' cartoons disappeared from The Freeman for about a year after the Harrison cartoon was published. Historians suspect that the economic pressures of The Freeman forced him to steer away from political drawings. When his works reappeared, they featured humorous or general commentary about race relations, with exception of two illustrations that were indirectly critical of Harrison.

In what turned out to be his final work, Lewis drew an architectural drawing of St. Paul A.M.E. Church in St. Louis, which was published in The Freeman on March 28, 1891. By the time of his death later that year at age 53, Lewis had given up any hope for true racial justice. His obituary notices in The Freeman concluded with a wish that he had lived "a completer life, where conditions may not interfere, or man's narrowness or unfair hatred prevent the full expression of his unique and striking gifts."

Lewis didn't spend much time on this earth, but his star burned brightly while he was here.

This article is among features at ExplorePineBluff.com, a program of the Pine Bluff Advertising and Promotion Commission. Sources: EncyclopediaofArkansas.com, Commonplace.online, Wikipedia.com, African Americans of Pine Bluff and Jefferson County. Image Credit: Library of Congress. Details: www.explorepinebluff.com or (870) 534-2121.