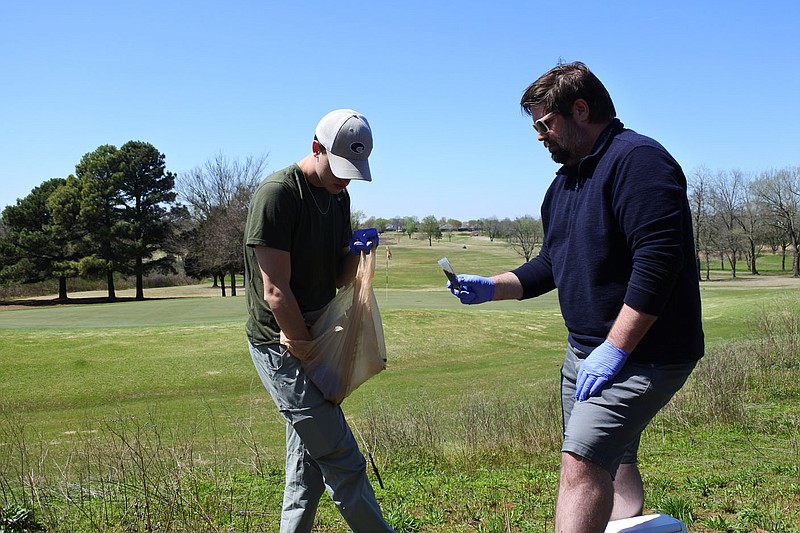 Ethan Moore, junior and biology major at the University of Arkansas at Fort Smith, left, and Jeff Shaver, associate professor of biological sciences at the College of Science, Technology, Engineering and Mathematics at UAFS, right, take a soil sample in one of the restored areas at Ben Geren Golf Course on March 29. (NWA Democrat-Gazette/Thomas Saccente)

FORT SMITH -- A Sebastian County golf course is converting some of its land back to a prairie habitat, creating a home for wildlife.

The course was one of five winners in the state, the other four being landowners who dedicated private land to increase habitat for wildlife, working with the commission's private land biologists in the process.

Jay Randolph, Sebastian County park administrator and golf course superintendent, was nominated for the award by biologist Michelle Furr, who wrote in her nomination letter that Randolph is a "true conservationist" who has gone above and beyond to reestablish Massard Prairie throughout Ben Geren Golf Course and Park, according to a Game and Fish news release.

The award isn't the only attention the golf course has received this year.

Some University of Arkansas-Fort Smith students gave a presentation at the annual meeting of the Arkansas Academy of Science this month in which they discussed their work analyzing soil samples from virgin prairie at Massard Prairie in Fort Smith, as well as remnant, developed and restored tallgrass prairie at Ben Geren Golf Course.

Jeff Shaver, an associate professor of biological sciences at the university, is a faculty mentor for this ongoing project, which began in spring 2019.

Shaver said the goal is to be able to identify microbial communities in the different types of soils, which were created through prairie restoration efforts undertaken by Randolph. Researchers want to determine whether there are different bacterial or fungal communities in these soils, and, if so, whether they are an outcome of or a contributing factor to the restoration process.

"One of the long-term goals, and overarching question, is could we potentially identify fungal or bacterial soil species that are critical for efficient prairie restoration," Shaver said.

Randolph said Sebastian County Parks decided to start putting in native plants on its 27-hole Ben Geren Golf Course in 2016. Providing habitat for pollinators and other wildlife, as well as reducing water usage and mowing for the golf course, were among the reasons for this move.

Massard Prairie was once where Ben Geren Regional Park stands today. The golf course is part of the park.

The prairie used to be 10,000 acres, but development has reduced the prairie to fewer than a couple of hundred acres, Randolph said.

Sebastian County Parks is essentially attempting to copy for the golf course what is on the remaining virgin pieces of Massard Prairie, according to Randolph. This includes hundreds of types of plants such as wildflowers, sedges, rushes and tallgrass prairie grasses, he said.

These native plants also serve as "host plants" for native animals, among them birds and insects. Certain types of butterflies, moths and birds have been drawn to these Massard Prairie restoration areas because of their dependence on plants found there, Randolph said.

Emily Bellis, assistant professor of bioinformatics at Arkansas State University, joined the project in fall 2019, Shaver said. The two received a grant of $66,946 last fall from the Arkansas IDeA Network of Biomedical Research Excellence to fund a portion of the research.

Leslie Cooper, coordinator of the Arkansas Monarch Conservation Partnership, said she knows of a few Arkansas golf courses doing similar prairie restoration projects, but none as large as the one at Ben Geren.

Monarch butterflies migrate each fall more than 3,000 miles from the United States and Canada to Mexico. Creating habitat for them facilitates their breeding cycle and their migration, Cooper said.

Conservation programs such as that at Ben Geren are increasing monarch butterfly and pollinator conservation on both a state and national scale, Cooper said. The Ben Geren project is an example of such conservation occurring in "unlikely places" such as urban areas, rights of way and golf courses, she said.

There are programs and plans for enhancing habitat on public land, but it's important that private land owners and managers integrate monarch butterfly and pollinator habitat into their management plan, given that a majority of Arkansas is privately owned, Cooper said.

"One in three bites of food is attributed to pollinators, to pollination services," Cooper said.