U.S. warns Russians on the fate of Navalny 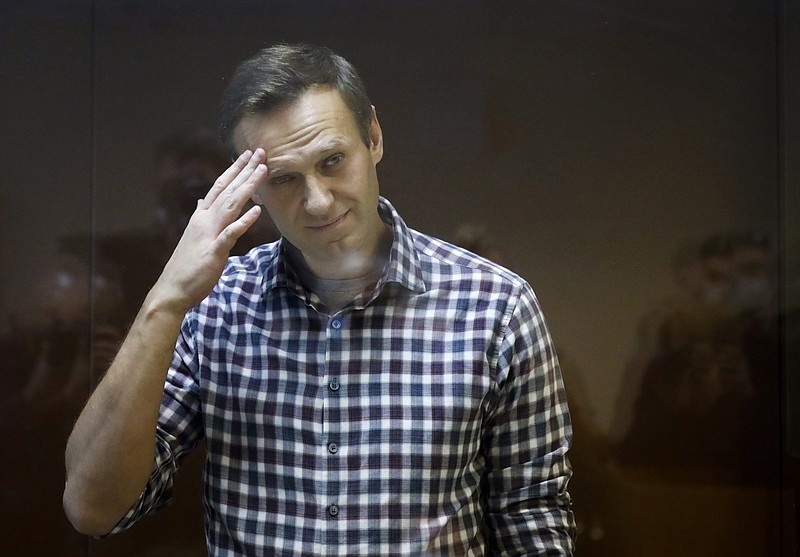 FILE - In this Saturday, Feb. 20, 2021 file photo, Russian opposition leader Alexei Navalny stands in a cage in the Babuskinsky District Court in Moscow, Russia. Russian opposition leader Alexei Navalny says he has started a prison hunger strike to protest officials’ failure to provide proper treatment for his back and leg pains. In a statement posted Wednesday, March 31, 2021 on Instagram, Navalny complained about prison authorities’ refusal to give him the right medicines and to allow his doctor to visit him. (AP Photo/Alexander Zemlianichenko, File)

The U.S. warned Russia of "consequences" if jailed opposition leader Alexei Navalny dies, deepening the conflict over the dissident who has already survived an alleged assassination attempt and is now engaged in the third week of a hunger strike.

Putin's most outspoken critic has been imprisoned since March 11 at the IK-2 prison camp about 60 miles from Moscow for breaking parole rules. He had gone to Germany to recover from a near-fatal chemical poisoning in Siberia that he and Western governments blamed on the Kremlin. Russian authorities deny any involvement.

[Video not showing up above? Click here to watch » https://www.youtube.com/watch?v=4zKsmV56XkA]

"We have communicated to the Russian government ... they will be held accountable by the international community," U.S. national security adviser Jake Sullivan said on CNN's "State of the Union" on Sunday. "We are looking at a variety of different costs that we would impose, and I'm not going to telegraph that publicly at this point. But we have communicated that there will be consequences if Mr. Navalny dies."

The 44-year-old Navalny started a hunger strike to protest prison authorities' refusal to allow him to be seen by a private doctor. He says he is suffering from severe back pain and loss of feeling in his legs -- prison doctors found slipped disks in his back -- and that the medical care in prison is inadequate; the Russian penitentiary service says he is getting appropriate care.

Several doctors went to the prison colony Sunday but were not allowed in to see him.

"It's cruel and monstrous to deny access to a dying patient," Anastasia Vasilyeva, the head of a Navalny-backed doctors' union, said outside the prison.

A doctor said Saturday that test results he received from Navalny's family showed sharply elevated levels of potassium, which could lead to cardiac arrest, and signs of kidney failure.

"Our patient could die at any moment," said the doctor, Yaroslav Ashikhmin.

Navalny had been in good health before narrowly surviving an attack with a rare nerve agent last summer. His lawyers have not ruled out lingering effects of the chemical weapon on his health. He was moved to a a prison infirmary with a high temperature and coughing, but the prison told Navalny and his lawyers that tests for covid-19 and tuberculosis, a common contagion in Russian prisons, were negative.

Leonid Volkov, a top strategist for Navalny, said the demonstrations were called with three days' notice because "his life hangs in the balance ... . We don't know how long he can hold on. But it is clear we do not have time."

The protests are planned in symbolically resonant locations -- Manezh Square in Moscow, just outside the Kremlin walls, and St. Petersburg's sprawling Palace Square. More than 460,000 people have pledged anonymously to take part in calling for his release, according to a tally on Navalny's website.

There was no immediate comment from police or government officials, but the response is likely to be harsh. In January, police arrested more than 10,000 people during nationwide protests demanding Navalny's freedom.

The European Union's foreign policy chief, Josep Borrell, said in a statement that the 27-nation bloc was "deeply concerned" about reports of Navalny's deteriorating state.

Russia's Federal Penitentiary Service didn't respond to requests for comment. Officials have said previously that Navalny has received all necessary medical attention. Russia has brushed aside Western criticism, and Kremlin officials refuse even to mention Navalny by name.

Yet even as his condition deteriorates, Russian prosecutors stepped up a crackdown Friday by asking a Moscow court to declare Navalny's Anti-Corruption Foundation and his Moscow campaign headquarters to be extremist organizations. The opposition group warned that the designation could subject all its staff and volunteers to criminal prosecution and imprisonment.

It was the latest signal of an ever-hardening line within Putin's government against opponents at home and abroad -- and an effort to portray the domestic opposition as associated with a foreign threat. The Russian military has been massing troops near the Ukrainian border this spring.

Prosecutors in a statement said of Navalny's supporters that, "under the cover of liberal slogans, these organizations engaged in creating conditions for destabilizing the social and sociopolitical situation." It said the groups wanted to stage a "color revolution," implying, in Russian political parlance, that they were aided from abroad.

Biden on Thursday ordered a raft of new sanctions against Russia, including restrictions on buying new sovereign debt, in response to allegations that Moscow was behind the computer hack on SolarWinds Corp. and interfered with last year's U.S. election.

Yet the moves were calibrated to punish the Kremlin for past behavior while keeping relations from deteriorating further, especially as tensions grow over the Russian military build-up near Ukraine. Biden has offered to meet Putin later this year, an invitation Russia said it responded to "positively."

Information for this article was contributed by Henry Meyer, Scott Rose, Geraldine Amiel, Birgit Jennen, Ania Nussbaum, Viktoria Dendrinou and Ros Krasny of Bloomberg News (TNS); by Jim Heintz of The Associated Press; by Andrew E. Kramer of The New York Times; and by Robyn Dixon of The Washington Post.