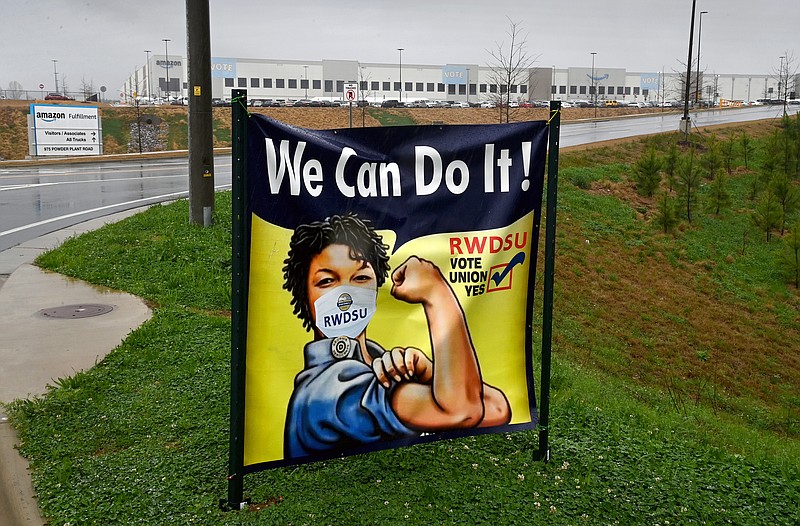 A sign at the entrance to an Amazon warehouse in Bessemer, Ala., where workers rejected unionization in a vote that ended March 29. MUST CREDIT: Washington Post photo by Michael S. Williamson

SEATTLE -- The union that lost its bid to represent Amazon warehouse staff in Bessemer, Ala., earlier this month is now seeking to overturn the election results, claiming in a legal filing that the e-commerce giant improperly pressured workers to oppose unionization.

The Retail, Wholesale and Department Store Union filed its objections with the National Labor Relations Board on Friday, a move that triggers a hearing process to resolve its claims. Labor laws require the agency to set that hearing within 15 business days of the vote tally, or by April 30. If the union succeeds, the labor board could call for a new election.

The union said it would file objections when it lost the high-profile vote April 9, a lopsided defeat in which 1,798 workers opposed unionization and 738 supported it. That margin of victory left another 505 ballots uncounted because they would not have changed the outcome.

The union alleged Amazon's tactics in the election "constitute conduct which prevented a free and uncoerced exercise of choice by the employees," adding that the actions "constitute grounds to set the election aside."

"Rather than accepting these employees' choice, the union seems determined to continue misrepresenting the facts in order to drive its own agenda," Knox said in an emailed statement. "We look forward to the next steps in the legal process."

While many of the union's allegations echo claims it made during the course of the organizing drive, it made a series of new allegations as well.

According to the union, Amazon interrogated employees about their views of the union and issued a series of threats, including that it would shutter the warehouse if they unionized. The union accuses the company of discouraging union supporters from discussing the proposal to join the union during work hours, while allowing anti-union employees to agitate against the union while on the clock.

Workers who questioned the company's claims during mandatory anti-union meetings were called up and then kicked out in front of hundreds of co-workers, the union said, while pro-union employees were reassigned to roles where they would be isolated from colleagues while at work. The union also accused Amazon of firing a union supporter for distributing union cards and punishing an employee for challenging the company's claims during the mandatory sessions. In the filing, the union didn't identify specific people fired or punished but pledged to submit evidence to the labor board.

Knox said the company did not threaten layoffs and that she couldn't verify if an employee was fired without a name.

The union included a charge it previously leveled at Amazon over a U.S. Postal Service mailbox that popped up in front of the warehouse just after voting started. The union obtained emails through Freedom of Information Act requests that show that Amazon employees pressed the Postal Service to install a mailbox just as the seven-week mail-in balloting began.

In its filing, the union argued that the mailbox, which has no U.S. Postal Service markings, created the impression that Amazon had a role in collecting and counting ballots, potentially influencing their votes. And it noted that the labor board, which set the rules for the election, rejected Amazon's request to put ballot boxes at the warehouse for in-person voting. The labor board cited concerns about the safety of Amazon workers and agency staff members during the coronavirus pandemic.

Amazon has previously defended the mailbox placement, saying it made voting easier for workers, and that only the Postal Service had access to it.

The union also claimed in its filing that Amazon's successful effort to convince local county officials to change the timing of a traffic light just outside the warehouse improperly inhibited its ability to engage with workers at the end of their shifts. Amazon has said it requested the change to improve traffic flow.

And the union also alleged that a financial offer Amazon made to lure unhappy workers to quit amounted to an improper incentive to weed out pro-union workers. Amazon has countered those charges, noting that it began offering financial incentives to quit in 2014 and extends the initiative to all its North American warehouse staff.

Information for this article was contributed by Josh Eidelson and Spencer Soper of Bloomberg News (TNS), and by Joseph Pisani of The Associated Press.