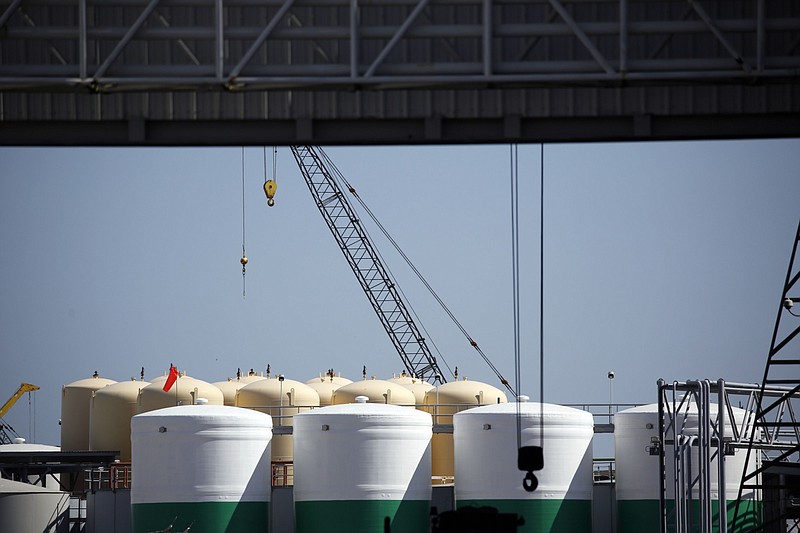 Barely a fifth of the surplus that flooded into the storage tanks of developed economies when oil demand crashed last year remained as of February, according to the International Energy Agency. Since then, the remnants have been whittled away as supplies hoarded at sea are plunging and as a key depot in South Africa is depleted.

The rebalancing comes as the Organization of the Petroleum Exporting Countries and its allies keep vast swaths of production offline and as a tentative economic recovery rekindles global fuel demand. It's propping international crude prices near $67 a barrel, a boon for producers but an increasing concern for motorists and governments wary of inflation.

"Commercial oil inventories across the OECD [Organization for Economic Cooperation and Development] are already back down to their five-year average," said Ed Morse, head of commodities research at Citigroup. "What's left of the surplus is almost entirely concentrated in China, which has been building a permanent petroleum reserve."

The process of depleting the surplus isn't quite complete. A considerable overhang appears to remain off the coast of China's Shandong province, though this may have accumulated to feed new refineries, according to the consultancy IHS Markit Ltd.

Working off the remainder of the global excess may take some more time, as OPEC and its allies are reviving some halted supplies and as new virus outbreaks in India and Brazil threaten demand.

Still, the end of the glut at least appears to be in sight.

Oil inventories in developed economies stood just 57 million barrels above their 2015-19 average as of February, down from a peak of 249 million in July, the International Energy Agency estimates.

It's a stark turnaround from a year ago, when lockdowns crushed world fuel demand by 20% and the trading giant Gunvor Group Ltd. fretted that storage space for oil would run out.

In the U.S., the inventory pileup has effectively cleared already.

Total stockpiles of crude and products subsided in late February to 1.28 billion barrels -- a level seen before the pandemic -- and continue to hover there, according to the Energy Information Administration. Last week, stockpiles on the East Coast fell to their lowest in at least 30 years.

"We're starting to see refinery runs pick up in the U.S., which will be good for potential crude stock draws," said Mercedes McKay, a senior analyst at the energy consultancy FGE.

There have also been declines in the nation's Strategic Petroleum Reserve, the warren of salt caverns in Louisiana and Texas used to store oil for emergency use. Traders and oil companies were allowed by former President Trump to temporarily park oversupply there, and in recent months they have quietly removed about 21 million barrels from the location, according to people familiar with the matter.

The oil surplus that gathered on the world's seas is also diminishing. Ships were turned into makeshift floating depots when onshore storage grew scarce last year, but the volumes have plunged, according to IHS Markit. They've tumbled about by 27% in the past two weeks to 50.7 million barrels, the lowest in a year, IHS analysts Yen Ling Song and Fotios Katsoulas estimate.

A particularly vivid symbol is the draining of crude storage tanks at the logistically critical Saldanha Bay hub on the west coast of South Africa. It's a popular location for traders, allowing them the flexibility to quickly send cargo to different geographical markets.

Inventories at the terminal are set to fall to 24.5 million barrels, the lowest in a year, according to ship tracking data monitored by Bloomberg.

For the 23-nation OPEC alliance led by Saudi Arabia and Russia, the decline is a vindication of the strategy adopted a year ago. The alliance slashed output by 10 million barrels a day last April -- roughly 10% of global supplies -- and is now in the process of carefully restoring some of the halted production.

To consuming nations, the destocking is less of a blessing. Drivers in California are already reckoning with paying almost $4 for a gallon of gasoline, data from the AAA auto club shows. India, a major importer, has complained about the financial pain of resurgent prices.

"Gasoline sales are ripping in the U.S.," said Morse at Citigroup. "Demand across all products will hit record levels in the third quarter, pushed up by demand for transport fuels and petrochemical feed-stocks."

Information for this article was contributed by Javier Blas, Sharon Cho, Serene Cheong and Jeffrey Bair of Bloomberg News (WPNS).