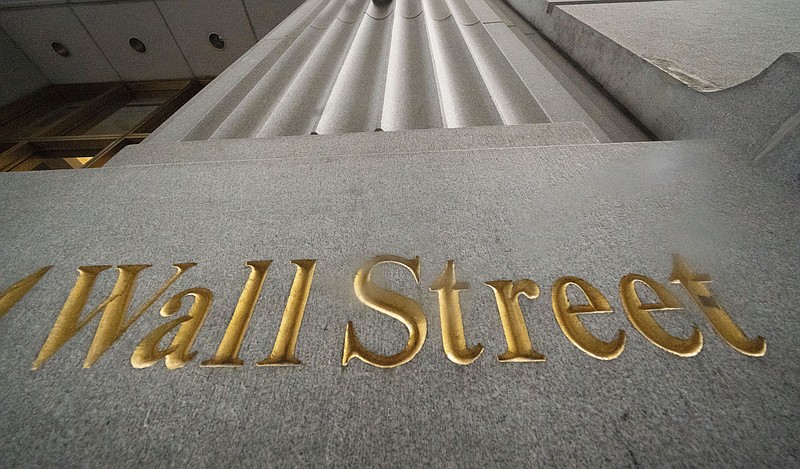 FILE - In this Nov. 5, 2020 file photo, a sign for Wall Street is carved in the side of a building. Stocks are easing lower in early trading on Wall Street, pulling major indexes slightly below the record highs they reached last week. The S&P 500 was down 0.2% in the early going Monday, April 19, 2021, and the Dow Jones Industrial Average fell 0.4%. (AP Photo/Mark Lennihan, File)

The S&P 500 dropped 0.5%, shedding more than a third of its gain from last week. Tech stocks were the biggest weight on the market, but the losses were shared broadly by a mix of banks, energy companies and others that rely on direct consumer spending. Chipmaker Intel fell 1.7%, Capital One lost 0.9% and Valero Energy slid 2.3%. Only real estate stocks eked out a gain.

The pullback came as bond yields mostly moved higher after easing last week. Rising bond yields tend to make shares in technology companies that have had a strong runup over the past year look too expensive.

"What we're seeing in the markets today is that bond yields, after falling last week, are back to rising again," said Megan Horneman, director of portfolio strategy at Verdence Capital Advisors. "And you can see that negative correlation between rising bond yields and declining prices in technology is still with us."

Stocks have rallied in recent weeks amid a string of encouraging reports on hiring, consumer confidence and spending that point to an accelerating U.S. economy. Covid-19 vaccinations and enormous support from the U.S. government and Federal Reserve are fueling expectations for solid corporate profit growth as more businesses reopen after being forced to close or operate on a limited basis due to the pandemic.

A good amount of investor attention is focused on the bond market as government stimulus and the recovering economy have led to concerns about inflation. The yield on the 10-year Treasury note rose to 1.60% from 1.57% late Friday.

Even so, company earnings are front and center this week, as investors look to justify the recent rise in stock prices with the profits needed to keep the market fueled in this recovery. On average, analysts are expecting profits across the S&P 500 to be up 24% from a year earlier, according to FactSet.

The busiest stretch for quarterly results begins this week, with 81 out of the 500 members of the S&P 500 due to report results, as well as 10 out the 30 members of the Dow, including Johnson & Johnson, Verizon Communications and Intel.

Outside of earnings, several stocks made big moves Monday.

Tesla dropped 3.4% after two people were killed in Texas in a crash of one of its models. Authorities say there was no one in the driver's seat at the time of the crash. It's not clear whether the car's driver-assist system was being used.

Peloton slid 7.3% after regulators issued a safety notice over the exercise equipment company's new treadmill. The company hasn't been forced to recall the treadmill, and it's fighting the issue.