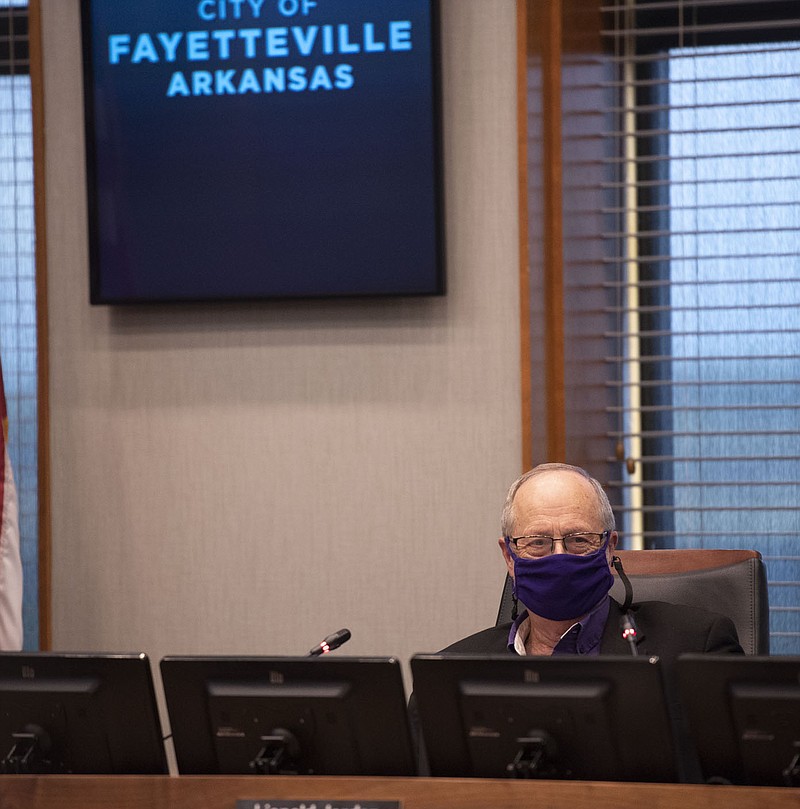 Fayetteville mayor Lioneld Jordan smiles Tuesday during a Fayetteville City Council meeting. The council held its first meeting in-person since March 2020, when the covid-19 pandemic prompted closings globally. Among items on the agenda were regulations for short-term rentals and some rezoning requests. Go to nwaonline.com/2100421Daily/ and nwadg.com/photo. (NWA Democrat-Gazette/J.T. Wampler)

FAYETTEVILLE -- Short-term rentals no longer will operate illegally in the city.

The City Council on Tuesday voted 8-0, after several amendments, to approve regulations for short-term rentals such as Airbnb and VRBO. Anyone operating such a rental in a zoning district that doesn't allow hotels will have to get a business license and building safety inspection from the city.

There are two types of rentals under the ordinance. Type I rentals are owner-occupied. Typically, the owner will go out of town and rent out the home while gone. Type II rentals serve as full-time lodging properties.

Owners of Type II rentals in zoning districts where hotels are not already allowed will additionally have to get a use permit from the Planning Commission.

Short-term rental operators will have a six-month grace period to get the required permits and inspections. They have to pay the city's 2% hotel, motel and restaurant sales tax, get insurance and have a representative who can be on site within three hours in case of emergency.

A maximum of two people per bedroom can stay in a home. No parties are allowed. Parking is limited by the underlying zoning district.

The ordinance says no more than 2% of all residential units in the city, as defined by the U.S. Census Bureau or American Community Survey, whichever is higher, can be Type II short-term rentals. There are additional density restrictions depending on number of units in a multifamily building or different kinds of uses within a zoning district.

Council Member Teresa Turk introduced about 10 amendments to the proposal, some of which gained a council majority in support. One clarified minors can't operate a short-term rental. Another kept use of the word "bedroom" consistent throughout the language. A third clarified an owner shall report known criminal activity by a guest within 12 hours.

Discussion went on for more than two hours. Four members of the public spoke with a mix of responses.

Kathleen Everitt, executive director of Real Estate Investors of Northwest Arkansas, said the proposal started off simple by requiring operators to get a business license and safety inspection. The draft as presented, with its lengthy discussion of amendments, confused the issue, she said.

"I think we've ended up with something that's No. 1 burdensome, and difficult to understand," Everitt said.

Development of the proposal began about two years ago. City Attorney Kit Williams said he felt it had improved over the years, but he couldn't recommend the council adopt it. Having a discrepancy in residential occupancy limits for long-term rentals and short-term rentals could present legal issues, he said.

City code says no more than three unrelated people can live in a residence. Far more would be allowed in a short-term rental.

"I haven't lost all of my objections to this," Williams said.

The ordinance will sunset after about a year, meaning the council can decide to renew, change or let the regulations expire.

Mayor Lioneld Jordan said the regulations won't make everyone happy, but they are needed. City staff estimated about 500 short-term rentals are operating in the city illegally. He described the proposal as a good first step in bringing fair and logical regulations.

"These businesses have been operating outside the law," he said. "It can be uncomfortable to adjust to being regulated. But that's exactly what needs to happen."

Tuesday marked the first in-person public meeting at City Hall in more than a year. The administration will keep the online option available on Zoom for people to participate for the foreseeable future, Jordan has said.

Council members D'Andre Jones, Sloan Scroggin and Holly Hertzberg attended in person. No one from the public spoke in person.

City Hall closed to the public in March 2020 at the onset of the covid-19 pandemic. In-person participants Tuesday were spaced apart, some with partitions in place. Seating for about of handful of people was set up inside the chamber, with space open outside the doors and in a first-floor room showing the meeting on TV. 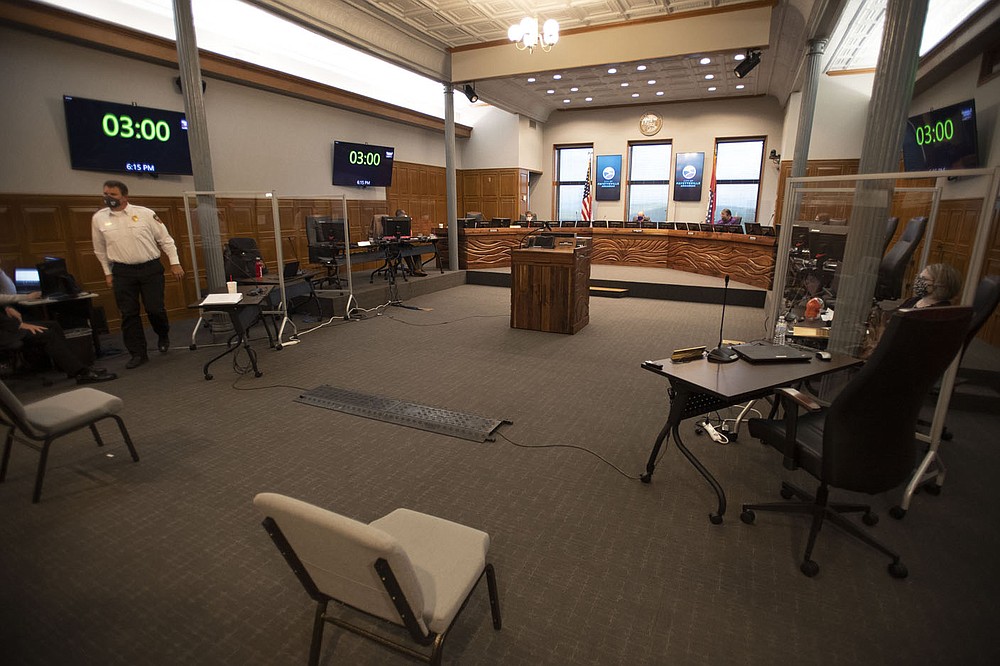 For more information, go to bit.ly/faySTRs