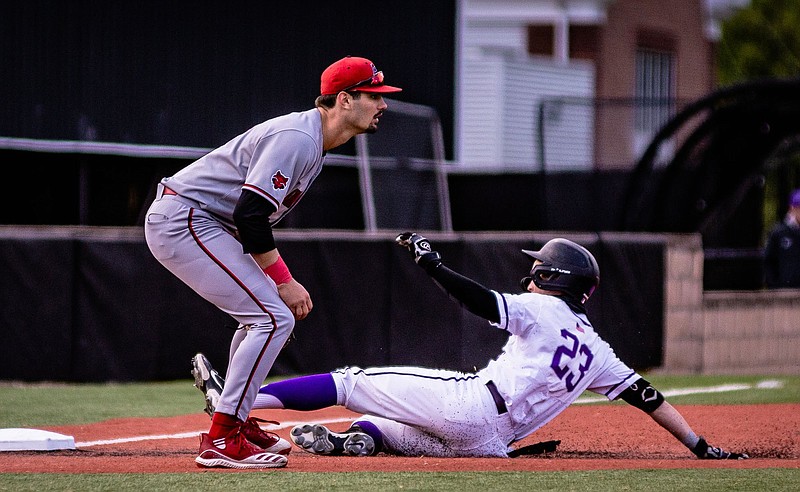 Drew Sturgeon of Central Arkansas slides safely into third base in front of Arkansas State third baseman Ben Klutts during the Bears’ victory over the Red Wolves on Tuesday in Conway. (UCA Athletics/Jaden Powell)

CONWAY -- On a night in which the University of Central Arkansas committed three errors and allowed two unearned runs, the Bears needed help from their bats Tuesday night.

Pearson's second and third RBI of the game handed UCA closer Tyler Cleveland a two-run lead, and the freshman struck out four batters over a scoreless final two innings to bring the team's four-game losing streak to a close.

"I was proud tonight because we overcame a couple of mistakes," UCA Coach Allen Gum said. "We made a few errors, gave up some bad runs, had some bad breaks at the plate, and we overcame that. This was a big win for us because we've been struggling."

UCA (11-20) returned from a weekend sweep at Texas A&M-Corpus Christi and opened a nine-game home stand with the come-from-behind victory over ASU (10-20), which lost for the third time in four games, as the teams combined for seven errors.

The Bears trailed 3-2 through 6 1/2 innings before pinch hitter Beau Orlando's ground out scored Taylor Daniell, and Pearson's decisive single up the middle plated Drew Sturgeon and Kolby Johnson in the top of the seventh, giving the Bears a lead they never relinquished.

Right-handed reliever Andrew Shoultz (1-0) earned his first career victory for the Bears, allowing two baserunners and one unearned run over two innings, while Cleveland earned his sixth save of the season.

Pearson knocked in Sturgeon to open the scoring in the second inning and paced a nine-hit Bears performance with a pair of singles and the three RBI. Johnson drew two walks and singled twice.

The Red Wolves committed four errors -- including two by catcher Parker Rowland -- and stranded 11 runners. Third baseman Ben Klutts recorded two hits and extended his hitting streak to nine games. Brandon Anderson allowed four hits and a run over three innings in the start. Albat gave up two hits, a walk and two runs in a third of an inning.

"I didn't like the way we played catch," ASU Coach Tommy Raffo said. "That was the deal. We had two errors on one play, and then we didn't field behind the plate, and that was the game."

Sturgeon's second-inning triple was UCA's first of the season and he scored three pitches later on Pearson's single to right field to give the Bears a 1-0 lead.

ASU came back with a pair of runs in the top of the third started by Liam Hicks, who led off with a ground-rule double and came in on a single by Tyler Duncan. UCA right-hander Trent Gregson appeared to have limited the damage when Sky-Lar Culver sent a two-out fly ball to center field that swirled in the wind and bounced off the glove of Sturgeon. Jaylon Deshazier scored on the error and ASU led 2-1.

"It was moving so much," Gum said. "He just didn't stay with it like he should have. It was a tough night. That wind was howling."

The team went scoreless before trading unearned runs in the sixth, and the Red Wolves entered the bottom of the seventh up 3-2.

Daniell led off the bottom half with single and advanced to second on Rowland's second throwing error, and the junior scored when Orlando grounded out. Pearson then worked a five-pitch at bat before lacing a grounder past Albat's feet and up the middle for the two-run single to give the Bears the final lead.

"I just had to lock in and get up on the plate to give it my best effort," Pearson said. "I stuck with the plan and sent one up the middle with the infield in. That's a great feeling."