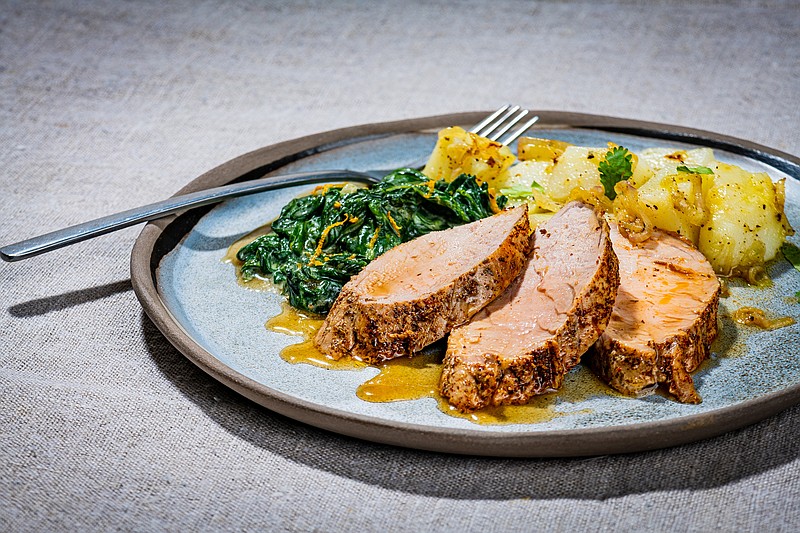 Pernil is Puerto Rican-style roasted pork, and though it’s easy enough to make at home — no large outdoor spit required — it does take a long time to cook. Inspired in part by a recipe in Von Diaz’s “Coconuts and Collards,” her lush memoir and cookbook, this pork tenderloin can be cooked in just 30 minutes after being rubbed with a pernil-style adobo, or marinade. Rich in garlic so as to evoke the flavor of traditional pernil, it also incorporates chili powder — a spice blend of ground red peppers, cumin and oregano — to bring a touch of heat and reddish hue to the pork. Serve it with soft potatoes covered in a quick lemon-onion-garlic sauce and five-minute coconut creamed spinach.

Leftovers may be refrigerated in covered containers for up to 3 days.

Pat the pork tenderloin dry, then cut 5 or 6 small, shallow slits into it with the tip of a knife — this will help the meat absorb the spices — and place it in the bag with the adobo. Massage the adobo into the meat until well coated on all sides. If you’d like, you can let the meat marinate in the refrigerator overnight or up to 1 day in advance.

When you’re ready to roast the pork, position a rack in the center of the oven and heat to 400 degrees. Line a rimmed baking sheet with aluminum foil, place the tenderloin in the center of the baking sheet and roast for 15 minutes. Using tongs or a fork, flip the tenderloin and roast for another 10 to 15 minutes, or until it reaches an internal temperature of 145 degrees; the exact roasting time will depend on the thickness of the meat. Let it rest at room temperature for 5 to 10 minutes before slicing and serving.

Make the potatoes: While the pork cooks, in a large pot over high heat, bring the potatoes and a large pinch of salt to a boil in enough water to cover. Cook until tender, about 20 minutes. Tip the pot into the sink and drain out almost all of the water, leaving a few tablespoons in with the potatoes. Return the pot to the stove, off heat, but cover and keep warm.

While the potatoes cook: In a small skillet over medium-high, heat the olive oil until it shimmers. Add the onion, garlic and a pinch of salt. Cook, stirring frequently, just until the onion and garlic turn translucent, about 5 minutes. Remove from the heat and stir in the lemon juice and black pepper. Set aside until the potatoes are cooked.

Pour the mojo sauce over the hot potatoes. Cover and keep warm until ready to serve. Serve garnished with cilantro, if using.