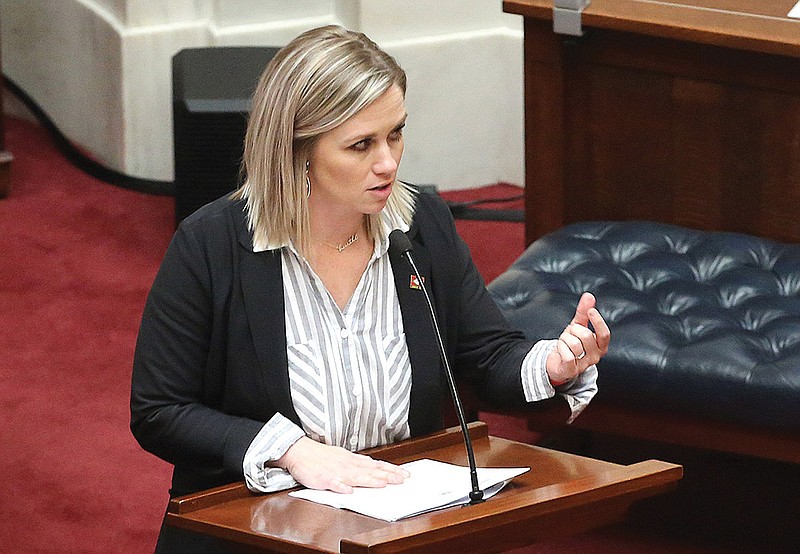 Sen. Breanne Davis presents Senate Joint Resolution 10, a proposed amendment to allow the Legislature to call itself into session, on Wednesday at the state Capitol in Little Rock. (Arkansas Democrat-Gazette/Thomas Metthe)

The Arkansas Senate on Wednesday approved a resolution to refer to voters in the 2022 general election a proposed amendment to the Arkansas Constitution that would allow the state Legislature to call itself into special session.

Under the constitution as currently written, only the governor can call a special session, and the governor sets the agenda for that session.

The Senate voted 30-2 to approve Senate Joint Resolution 10 by Sen. Breanne Davis, R-Russellville, sending the measure to the House for further action. Both chambers must approve proposed amendments to get them on the ballot; the governor has no role.

If SJR10 is approved by the House and by voters in the general election in 2022, then it will create two avenues by which the General Assembly could convene in an extraordinary session without the governor's initiation: by a joint written proclamation of the speaker of the House and the Senate president pro tempore, or by the submission of the signatures of two-thirds of the members of the 35-member Senate and 100-member House in a proclamation.

In 2020, executive actions taken by Gov. Asa Hutchinson in response to the covid-19 pandemic led to some Republican lawmakers expressing frustration that they didn't get a say on issues such as the statewide mask mandate.

Davis told senators on Wednesday that it is important for the Legislature to be able to call itself into a special session and that lawmakers in 36 other states already have that authority.

Seventeen states require signatures from two-thirds of lawmakers in both chambers to call the Legislature into a special session, she said.

"To my knowledge, none of those states have turned into a pseudo full-time Legislature [because] of this ability or are abusing the process," Davis said in a text message to the Arkansas Democrat-Gazette.

The other 13 states in which only the governor can call a special session are Alabama, California, Idaho, Indiana, Kentucky, Michigan, Minnesota, Mississippi, North Dakota, Rhode Island, South Carolina, Texas and Vermont, according to the National Conference of State Legislatures.

Hendren said he voted against the resolution because "this will continue the trend to move toward full-time legislators instead of part-time public servants."

"Because we have fiscal sessions on off [regular session] years, we are never more than 10 months away from being in session anyway," he said in a text message to the Democrat-Gazette. "I still believe the state is better served by part-time legislators."

But Davis said that "this amendment is about future Arkansas legislatures."

"With that in mind, it was important to Rep. Fran Cavenaugh and myself that we pass an amendment that protects special sessions," she said, referring to the Republican from Walnut Ridge. "We believe special sessions should remain special. But we also believe, since the Legislature represents the people of Arkansas, that we should have a path to call ourselves into a special session when needed."

Hutchinson said Monday that he did not see any need for a constitutional change dealing with the General Assembly convening.

"In Arkansas our current constitution provides for a part time legislature that meets in General Session once every two years and in fiscal session in the alternating years. I see no need for a change," the Republican governor said in a written statement.

Lawmakers may refer up to three proposed constitutional amendments to voters in each regular session held every two years.

Last week, the Arkansas House of Representatives advanced House Joint Resolution 1005 by Rep. David Ray, R-Maumelle, which would raise the threshold for voter approval of proposed constitutional amendments and initiated acts to 60% from the simple majority now required.

The Senate State Agencies and Governmental Affairs Committee on Tuesday night advanced HJR1005 to the full Senate for consideration.

Under the 93rd General Assembly's joint rules, a third proposed constitutional amendment should not be considered or voted upon by the General Assembly until identical resolutions authorizing the consideration of the proposed amendment have been approved by two-thirds of the members of both chambers.

With five senators not voting, one voting present and another excused, the Senate on Wednesday voted 28-0 to approve Senate Resolution 26 to authorize Sen. Jason Rapert, R-Conway, to pursue the consideration of his Senate Joint Resolution 14 as a third proposed constitutional amendment to refer to voters for the 2022 general election.

SJR14 proposes to add an amendment to the state constitution that prohibits the government from burdening a person's freedom of religion unless the government can demonstrate that it furthers a compelling government interest and is the least restrictive means of furthering that interest.

Two-thirds of the House will be required to approve a resolution similar to SR26 before the Senate may consider Rapert's SJR14.

The Senate State Agencies and Governmental Affairs Committee previously also recommended that the Senate consider Senate Joint Resolution 13 by Rapert, which would add a provision to Article 2, the section of the Arkansas Constitution dealing with property rights, to include the right of residents of the state to bear arms. Rapert is chairman of the Senate committee.