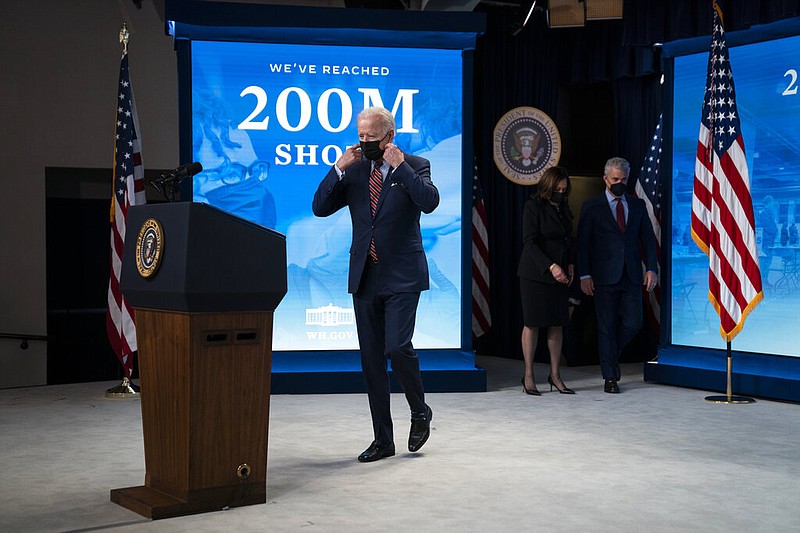 President Joe Biden arrives to speak about vaccination incentives Wednesday at the White House. “Every employee should get paid leave to get a shot, and businesses should know that they can provide it without a hit to their bottom line,” Biden said. “There’s no excuse for not getting it done.” (AP/Evan Vucci)

WASHINGTON -- President Joe Biden on Wednesday announced new employer tax credits and other steps to encourage Americans to get vaccinated against the coronavirus as his administration tries to overcome diminishing demand for the shots.

The initiative marks a shift from months of long waiting lists and limited opportunities for Americans to get vaccinated. Biden also announced Wednesday that the United States will hit his latest goal of administering 200 million coronavirus vaccine doses in his first 100 days in office.

"I'm calling on every employer large and small in every state to give employees the time off they need, with pay, to get vaccinated," Biden said. "No working American should lose a single dollar from their paycheck because they chose to fulfill their patriotic duty of getting vaccinated."

Repeatedly declaring the country had entered a "new phase" in which all Americans ages 16 and older can get vaccinated, Biden warned that "the broad swath of American adults still remain largely unvaccinated," and lamented that "too many younger Americans may still think they don't need to get vaccinated."

"To put it simply, if you're waiting for your turn, wait no longer," he said.

Biden made his pitch as there are both hopeful and concerning signs in the nationwide effort to vaccinate people as quickly as possible. After weeks of accelerating daily inoculations, the average daily number of reported shots in arms slowed significantly over the past week, with an 11% drop in daily shots administered nationally, according to data from the Centers for Disease Control and Prevention.

More than 40% of the U.S. population has received at least one dose of a vaccine. At the same time, most Americans who haven't been immunized say they're unlikely to get the shots, a recent poll showed. Meanwhile, a pause in the use of Johnson & Johnson's vaccine has complicated efforts to swiftly administer shots.

Biden called on all companies to provide employees with paid time off to get shots and to rest if they feel unwell afterward.

[Video not showing up above? Click here to watch » https://www.youtube.com/watch?v=QjsIH0TsWIA]

The president highlighted a tax credit in his $1.9 trillion pandemic relief law, which will reimburse businesses and nonprofits with fewer than 500 employees for up to $511 per day of paid vaccination leave offered between April 1 and Sept. 30, to a maximum of 10 workdays.

"Every employee should get paid leave to get a shot, and businesses should know that they can provide it without a hit to their bottom line," Biden said. "There's no excuse for not getting it done."

At least 133 million people in the United States have received one or both doses of a vaccine, according to Washington Post data. More than 86 million people are fully vaccinated, the data shows. Biden said 80% of American senior citizens will have had at least one shot today.

The new tax credit is part of the government's quest to buttress efforts in the private sector aimed at encouraging vaccination. Large employers from American Airlines to Target have unveiled incentives for employees to get vaccinated, from an extra day off next year to free rides to vaccination sites.

The success of those initiatives could help determine how businesses approach requiring vaccinations for their employees -- a debate that the administration has sought to leave to the private sector.

Short of mandates, however, Biden administration officials said they had examined research showing employers have outsize influence in reaching the remaining unvaccinated population. The tax credit, they said, would provide the financial support necessary to allow small businesses to make vaccination convenient for their employees.

"I think it's a very smart move," said Dorit Rubinstein Reiss, a professor at the University of California Hastings College of the Law. An even more immediate way to support small businesses in guaranteeing paid time off, she said, would be to provide direct payments to employers who show that they're providing this benefit.

Nirav Shah, director of the Maine Center for Disease Control and Prevention and president of the Association of State and Territorial Health Officials, welcomed the announcement, saying it was vital for government to help remove various "social determinants" blocking access to vaccination, from work to transportation to child care.

As Biden approaches his 100th day in office, he is eager to highlight the progress he has made in combating the pandemic. The president has made fighting the coronavirus the dominant focus of the early part of his presidency. He campaigned aggressively on the issue last year and signed the relief bill into law earlier this year.

Biden pledged in a news conference in late March that the U.S. would administer 200 million coronavirus vaccine shots by the end of April -- doubling a previous goal of 100 million shots in his first 100 days in office. On Wednesday, he called hitting that milestone ahead of that deadline an "incredible achievement for the nation."

The president delivered his Wednesday address just days after residents 16 and older became eligible for vaccination, a dynamic Biden promoted this week in a video.

"We have enough of it, you need to be protected, and you need in turn to protect your neighbors and your family. So please, get the vaccine," Biden says in the video.

As the demand for vaccinations has dropped, some states have altered their programs.

In Iowa, nearly half of the counties are not accepting new doses of vaccines from the state's allotment because demand has fallen off.

In Florida, Palm Beach County plans to close mass vaccination clinics at the end of May with thousands of available vaccine slots unclaimed.

In rural West Virginia, a vaccination clinic at a casino/race track parking garage is opening shots to out-of-state residents to address lagging demand. The hope is that people from the District of Columbia will make the hour's drive to get vaccinated.

In Arizona, a plan collapsed that would have opened a federally run vaccination site in Tucson; demand is slipping and county officials preferred more targeted, mobile locations.

In Louisiana, where 40% of the adult population has had one shot even though all adults have been eligible since March, officials are delivering doses to commercial fishermen near the docks and running pop-up clinics at a Buddhist temple, homeless shelters and truck stops. Civic groups are conducting door-to-door visits, akin to a get-out-the-vote effort, in neighborhoods with low vaccination rates.

In Alabama, Dr. Scott Harris, the state health officer, is trying to reach rural white residents, who are mistrustful of politicians and the news media. Harris is asking doctors to record cellphone videos, with a plea: "Please email them to your patients, saying, 'This is why I think you ought to take the vaccine.'"

Asked about the dip in vaccinations, Health and Human Services Secretary Xavier Becerra said "fluctuation is not uncommon" and that "what we want to do is continue to encourage Americans to continue to get vaccinated."

"The pace of vaccination isn't linear," Becerra said, adding that "we are on a pretty good pace."

Through its partnership with more than 40,000 retail pharmacies, the White House says more than 90% of Americans now live within 5 miles of a vaccination site. The administration is encouraging state and local efforts to take shots directly to people, whether through initiatives reaching the homebound or clinics at large employment sites.

Many states also have begun to open up vaccination sites to walk-in appointments, reducing reliance on often-cumbersome reservation systems.

Maximizing the number of Americans vaccinated in the coming months is critical for the White House, which is aiming to restore a semblance of normalcy around the July Fourth holiday and even more so by the beginning of the next school year.

Administration officials have been careful to avoid predicting when the country will have vaccinated enough people to reach herd immunity -- when enough people become immune to a disease to make its spread unlikely. The U.S. is on track to have enough vaccine supply for every adult by the end of May and for every American by July, but administering the shots will be another matter.

Biden said Wednesday that he hoped the U.S. could help provide other countries with vaccines to address the pandemic, but that domestic supply had not yet reached a high enough level to do that in earnest.

Biden said he talked with Canadian Prime Minister Justin Trudeau for about 30 minutes on Wednesday. "We helped a little bit there, we're going to try to help some more," Biden said, referring to his decision last month to provide about 1.5 million doses of the AstraZeneca vaccine to Canada. "But there's other countries as well that I'm confident we can help, including in Central America. But it's in process."

He added. "We don't have enough to be confident to send it abroad now. But I expect we're going to be able to do that."

Information for this article was contributed by Sean Sullivan and Isaac Stanley-Becker of The Washington Post; by Zeke Miller, Matthew Perrone and Ricardo Alonso-Zaldivar of The Associated Press; and by Sheryl Gay Stolberg and Annie Karni of The New York Times.