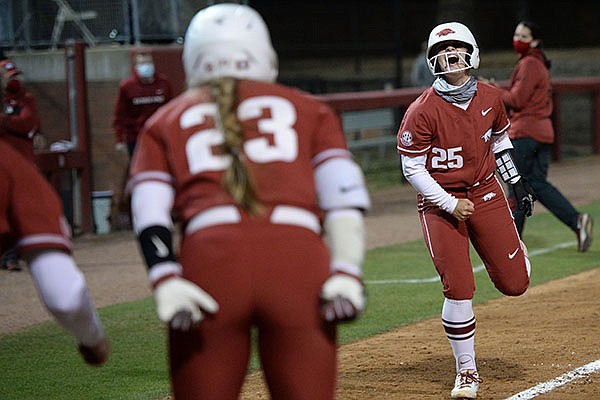 FAYETTEVILLE -- The University of Central Arkansas rallied late to send the game into extra innings, but Braxton Burnside's solo home run in the bottom of the eighth lifted the University of Arkansas to a 7-6 victory Wednesday night in Bogle Park.

The SEC's home run leader picked the perfect time to hit her 23rd home run of the season, sending a 2-2 changeup over the right-field wall with two outs in the bottom of the eighth inning.

It lifted the No. 6 Razorbacks (37-5) to a victory over a Central Arkansas (26-15) team that had rallied from a 5-0 deficit to tie the score with three runs in the top of the seventh inning.

Burnside is tied with Oklahoma's Jocelyn Alo for tops in the country in home runs.

"I was just trying to stay within my approach more than anything," Burnside said. "Then just try to see the ball and put a good swing on it."

The win completed a two-game season sweep for the Razorbacks, who defeated UCA 4-1 in Conway on March 9 in the first ever meetings between the two teams.

"UCA is a really tough squad," Deifel said. "And when you have this in-state battle, it adds a little more edge to them. We knew that they would come in and battle us to the end."

UCA Coach David Kuhn indicated his team had nothing to hang its head about.

"Just really pleased to see that we kept competing," Kuhn said. "We have a really good team and hopefully a lot of season left."

After back-to-back walks to Hannah McEwen and Danielle Gibson in the first inning, Malkin cleared the bases with a blast over the left-field fence to give the Razorbacks a 3-0 advantage.

Hannah Gammill's one-out single in the second scored Keely Huffine, and the Razorbacks made it 5-0 in the bottom of the third on a sacrifice fly by Kayla Green that brought home Gibson.

Arkansas starter Jenna Bloom did not allow a hit through the first three innings. UCA got on the board in the fourth on a triple by Cylla Hill that scored Megan Crownover. The Bears cut it to 5-2 in the fifth when Tylar Vernon came home on a sacrifice fly by Mary Kate Brown.

"I didn't think this was one of our better games from a concentration standpoint," Deifel said.

Malkin's second home run -- this one over the right-field fence -- extended the Arkansas lead to 6-2.

UCA loaded the bases with no outs against Arkansas ace Mary Haff, who had replaced Bloom the previous inning. Haff got Reagan Sperling to foul out and struck out Vernon before giving up a run-scoring slap single to Tremere Harris to cut the lead to three. She then got Jenna Wildeman on a popup to end the threat.

"We gave them a big inning early but we fought back," Kuhn said. "They had to bring in their ace. We competed hard against a really good team."

The Bears evened things up in the top of seventh aided by an Arkansas miscue. Brown and Kaylyn Shepherd led off with a pair of singles, then Kristen Whitehouse loaded the bases with a two-out single. After Sperling reached on an error to score Shepherd, Vernon lined a double to center, scoring Whitehouse and Jaylee Englekes to tie the score at 6-6.

"That seventh inning was exciting, it was fun," Kuhn said. "It came down to a couple of long balls."

UCA threatened again in the top of the eighth as Wildeman, a Bentonville graduate who leads the country with 39 stolen bases, singled and swiped second. Haff worked out of trouble.

After the first two Arkansas batters failed to reach base in the bottom half of the inning, Burnside ended the game. 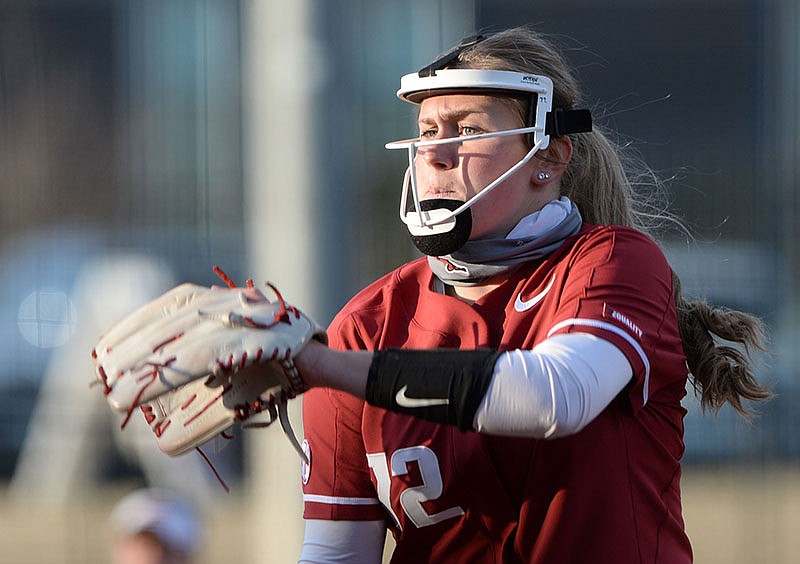 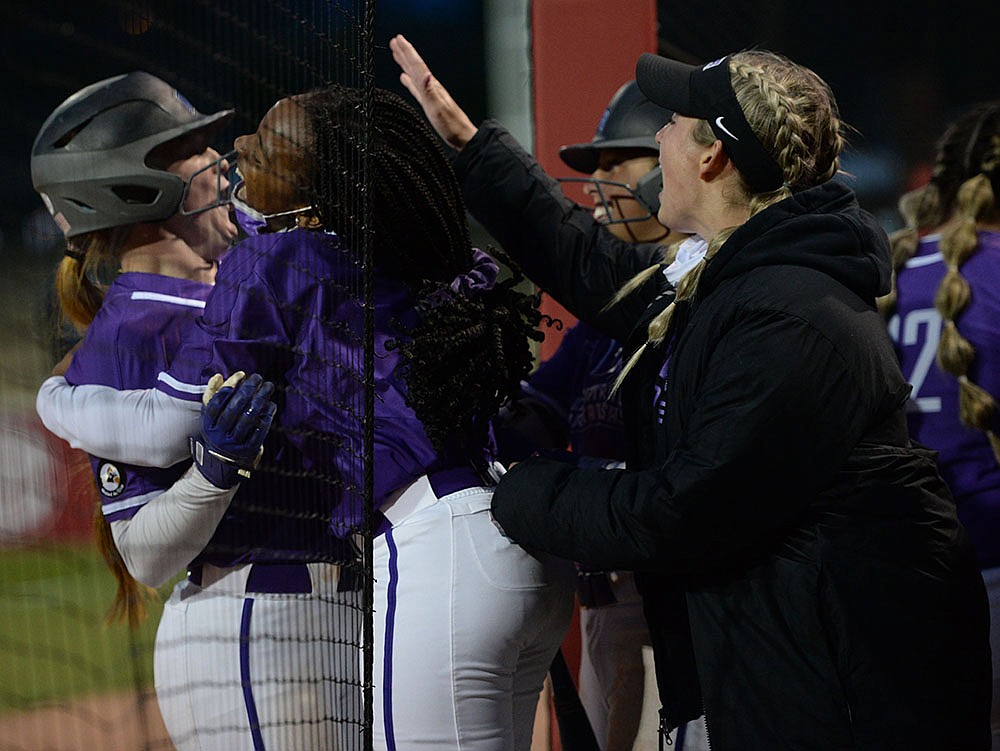 UCA players celebrate after Tylar Vernon’s two-run double tied the score 6-6 in the seventh inning against Arkansas on Wednesday night at Bogle Park in Fayetteville. The Razorbacks won 7-6 on a home run by Braxton Burnside in the bottom of the eighth. More photos at arkansasonline.com/422softball/ (NWA Democrat-Gazette/Andy Shupe)