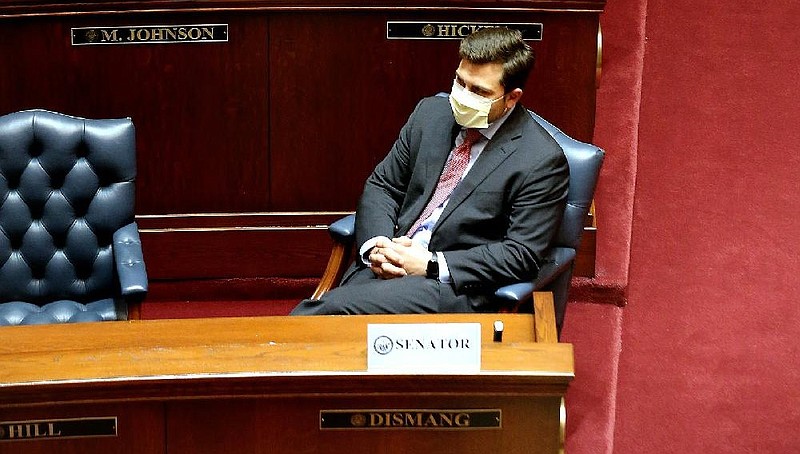 Sen. Jonathan Dismang listens to Gov. Asa Hutchinson’s address at the start of the Legislature’s fiscal session at the Jack Stephens Center at the University of Arkansas at Little Rock in this April 8, 2020, file photo. (Arkansas Democrat-Gazette/Thomas Metthe)

Senate Bill 680 by Sen. Jonathan Dismang, R-Searcy, passed in the House on a 52-40 vote, with two lawmakers voting present, after about an hour of debate. The bill needed 51 votes for approval in the 100-member House.

The legislation would create the "Philanthropic Investment in Arkansas Kids Program," which would provide scholarships for about 250 students whose family income is less than or equal to 200% of the federal poverty level.

Individual and corporate taxpayers would be eligible to receive tax credits by donating to organizations that fund the scholarships.

Hutchinson, a Republican, is supportive of the bill and plans to sign it, a spokeswoman said Wednesday.

Proposals to use public dollars to fund private school tuition have been contentious in the state Legislature the past few sessions. A bill that would have provided up to $4 million in state income tax credits to charities that fund private school scholarships for certain qualifying students failed by seven votes about a month ago, marking the third time a Republican-backed voucher program has failed in a majority-GOP General Assembly.

While Democrats have traditionally opposed such programs, the efforts have also garnered opposition from Republican legislators who fear they encroach on funding for public schools.

There are about 473,000 kindergarten-through-12th-grade students enrolled in public schools in Arkansas for the 2020-21 school year, according to the state Department of Education.

"There's always exceptions where a child might need a different educational experience," Bragg said. "Lower-income families don't have the ability to take advantage of the options that most of us in this chamber have."

"Still the question is, who are private schools accountable to? Who has oversight over them?" Rep. Gary Deffenbaugh, R-Van Buren, said.

Deffenbaugh added that parents with lower incomes won't have time to ensure their child's education is adequate, and said private schools can pick and choose who they accept.

"I've watched this state privatize public education every piece of the way. This bill represents the last aspect of public education that has not been sold out to private interests," Tollett said.

He said the voucher-program legislation has been divisive for the state Republican Party.

Legislators who spoke in support of SB680 touted the positive impacts of private schools in their lives and in the lives of their children and grandchildren with learning difficulties.

"This is a small, minuscule, tiny amount to help some kids in our state that are not going to have the chance otherwise," said Rep. Mary Bentley, R-Perryville, adding that the state has "great Christian schools that can help those kids."

"The public schools can' t be all things to all children, although they try," Fite said.

Lawmakers from rural districts said their constituents likely wouldn't benefit from the bill, since there aren't many private schools in those areas.

"Many of us sitting here today, not one of our children will get a chance to be in this 200," Rep. Nelda Speaks, R-Mountain Home, said. "We're going to have to quit working against each other and working against our schools for our public schools to become in Arkansas what we want them to be. ... This kind of thing won't make our schools better."

House Bill 1371, also sponsored by Bragg, would have created state income tax-credit funded private school vouchers for about 570 students. It failed on a 52-44 vote in the House in March, falling seven votes short.

SB680 doesn't have an escalator clause that would allow the program to expand once a certain amount of funds is reached, like HB1371 did, and Bragg said the decision of whether the program would be expanded would be up to legislators in the future.

After the vote Wednesday, Bragg said SB680 was a much simpler bill than HB1371, and in working to pass it, he focused on assuring lawmakers that it wouldn't hurt public schools.

Lawmakers enacted the Succeed Scholarship program, a voucher program that for 2021 provided 665 scholarships worth about $7,000 each, during the 2015 session. The program serves students from low-income students as well as foster children.

The Reform Alliance, the nonprofit organization that manages the Succeed Scholarship, thanked lawmakers for passing SB680 in a statement Wednesday.

"We are thrilled Arkansas lawmakers are putting students first," Emmy Henley, the organization's managing director, said. "This program provides a much-needed solution for Arkansas' most vulnerable families who currently have been unable to access options for their children who may not be able to excel in a public school setting."

During the 2021 session, lawmakers passed what is now Act 689, which expands eligibility for the Succeed Scholarship program to students from military families.

"When we divert public tax dollars to private schools, we lose our ability to ensure that those students are receiving the support and the educational opportunities that they deserve," Carol Fleming, president of the Arkansas Education Association, said. "We cannot afford to fund two different education systems, one private and one public, on the taxpayers' dime."

The bill passed quickly in the Senate last week on a 25-6 vote. It made it out of the House Revenue and Taxation Committee in an 11-8 roll call vote on Tuesday.

SB680 would apply to tax years beginning on or after Jan. 1, 2022. The state Department of Finance and Administration projects that the bill would reduce state general revenue by $2 million in fiscal 2023, starting July 1, 2022.

SB680 would provide an income tax credit to individuals or businesses equal to 100% of their contributions to scholarship organizations that provide the grants, according to the finance department. The credit may not exceed an eligible taxpayer's income tax due, and unused income tax credits may be carried forward for three years. The finance department's Office of Tax Credits and Special Refunds would issue tax credits on a first-come, first-served basis up to $2 million per calendar year.

Asked how potential donors would know when the state hit the $2 million cap, finance department spokesman Scott Hardin said in a written statement, "Under SB680, a requirement is in place in which DFA must notify the Division of Secondary Education when the annual cap of $2 million is met.

"Additionally, the remaining tax credits would be publicly-available information," he said in the written statement. "DFA could ensure this remains available to the public on the agency's website and via periodic media outreach."