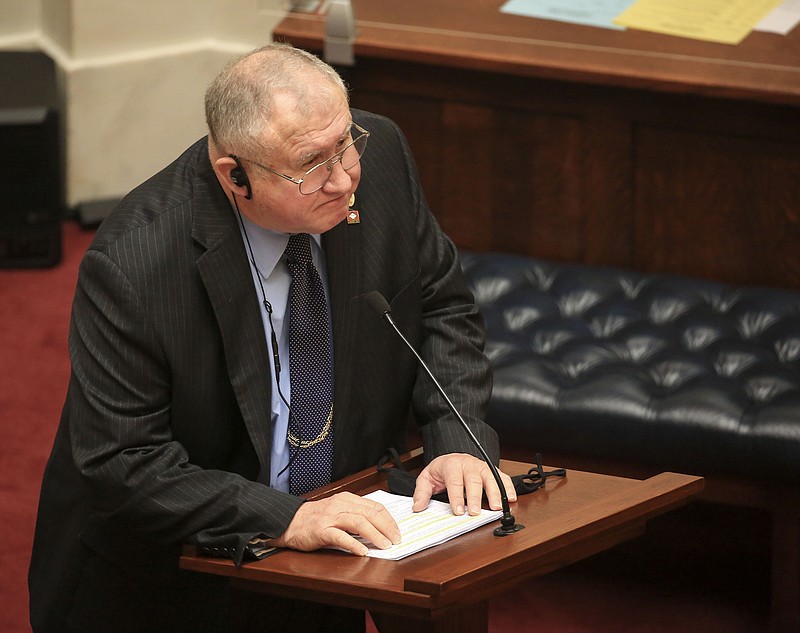 Sen. David Wallace, R-Leachville, presents SB530 that would amend certain provisions of the workers comp law Monday March 29, 2021 at the state Capitol in Little Rock. The bill failed to get the needed votes to pass. More photos at arkansasonline.com/330leg/. (Arkansas Democrat-Gazette/Staton Breidenthal)

The Arkansas House of Representatives on Wednesday voted to send the governor three tax-cut measures and on the other side of the Capitol, the Senate approved another tax-cut measure.

Meanwhile, the Senate Revenue and Taxation Committee advanced a handful of other tax-cut measures, including a bill that would implement Gov. Asa Hutchinson's plan to reduce the sales tax on used vehicles, to the Senate floor.

The House on Wednesday handily voted to approve and send to the governor:

• Senate Bill 566 by Sen. David Wallace, R-Leachville, which would extend a sales and use tax credit to help Nucor Steel Arkansas.

Under the bill, a company that qualified for a retention tax credit through the InvestArk program by an application approved by the Arkansas Economic Development Commission during June 22-28, 2017, may incur eligible project costs within six years rather than four years of the incentive agreement between a company and the commission, the state Department of Finance and Administration said.

The InvestArk sales and use tax credits for the eligible companies may be claimed after July 1, 2023, are contingent on a positive economic analysis by the commission's director, and may be claimed up to $750,000 for each qualifying project in any fiscal year under the bill, the department said. The department projects the bill would reduce state general revenue by up to $3.4 million a year in fiscal years 2024-28.

• Senate Bill 244 by Sen. Kim Hammer, R-Benton, which would expand the current sales tax exemption for instructional materials to include the electronic equipment required to make use of technology-based educational materials and electronic software, effective July 1, 2021.

On the other side of the Capitol, the Senate voted to send to the House legislation that would create a sales and use tax exemption for sales of coins, currency and bullion, effective Oct. 1.

On Wednesday morning, the Senate Revenue and Taxation Committee endorsed a bill that would implement Hutchinson's plan that would reduce the state sales tax on used vehicles, trailers and semitrailers priced between $4,000 and $10,000 from 6.5% to 3.5%.

Payton told the committee "this bill is a different idea of how to bring some relief on the cheaper used-car sales tax." Current law exempts used vehicles priced below $4,000 from the tax.

In response to a question from Johnson Payton said, "I am not satisfied with this [HB1912], but it is the best that we could do right now, so ... I am committed to continuing forward to try to relieve the tax burden altogether on those vehicles that are so near to the end of life we have already taxed them three or four times or more.

"They are a necessity for the hardworking salt of the earth Arkansans that need to get back to work, but also for the employer who needs a dependable employee," he said.

In other action, the Senate tax committee advanced:

• HB1157 by Rep. David Tollett, R-Lexa, which would increase an income tax deduction from $250 to $500 per taxpayer for qualified classroom investment expenses by a teacher for tax years. The bill is projected to reduce general revenue by $237,000 in fiscal 2022.

A bill that would create an income tax credit for employers who hire former felony offenders fell short of clearing the Senate tax committee on Wednesday, after Senate President Pro Tempore Jimmy Hickey, R-Texarkana, said he couldn't support the bill with the state not able to finance a bill to create an income credit for certain full-time law enforcement officers at this point.

"I don't think your bill is bad," Hickey told Rep. Robin Lundstrum, R-Elm Springs, about her House Bill 1719. But he pointed out that lawmakers had received copies of the proposed bill that would set state spending priorities next fiscal year, and that bill had taken into account other tax credits but not the one in HB1719. Legislative leaders hope to recess the session next week.