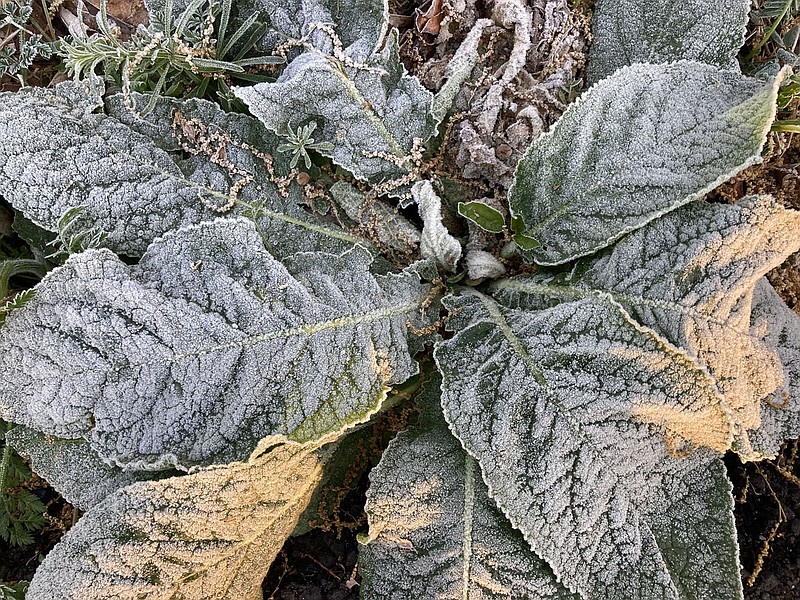 FAYETTEVILLE -- The heat from 300 bonfires helped save two acres of blueberries at Hatch Farm near Goshen early Wednesday morning as a cold front brought record low temperatures across Arkansas.

"We were out there from 11:30 last night to 9 o'clock this morning," Matt Varoz said Wednesday.

Varoz aid he's probably going to take a huge loss on his other 15 acres of blueberries after the temperature plummeted to 25 degrees just before sunrise Wednesday in Washington County.

He estimated the loss for his blueberry crop this year to be 40% to 75%, but he won't know for sure for another week or two.

"We will do some pumpkins in the fall, but blueberries are about 90% of our income," said Varoz.

A cold front moving across the country on Tuesday and Wednesday dropped temperatures more than 40 degrees in Arkansas compared to Monday.

"Blueberries can tolerate below freezing but not 27 and below," he said. "That's when you start to see damage."

Neal works for the University of Arkansas Division of Agriculture's Cooperative Extension Service.

He said a low of about 32 degrees forecast for Wednesday night wasn't expected to cause additional problem for fruit growers, partly because temperatures in the mid-50s on Wednesday warmed the ground.

Bill Reagan, owner of Reagan Family Farm in Fayetteville, said he put a polyester covering over his 1.3 acres of strawberries and irrigated them from underneath with 55-degree water.

Reagan said he spent all night from Tuesday to Wednesday driving a tractor around his 1.25 acres of blueberries and spraying them with water.

"With a broadcast tip on there, I can get four rows," he said.

Water freezing on the fruit generates heat, but Reagan said he must continue spraying until the sun comes up and warms the earth the next morning. Otherwise, the cold air can damage the wet plants even more.

Neal said the polyester material used to cover strawberries generally raises the temperature by about 4 degrees, but it's fragile and tears easily, so it's not practical for use on blueberry bushes.

"The blanket on the strawberries was frosty and icy," said Reagan, referring to Wednesday morning. "Every time a bloom touches a frozen blanket, that bloom is gone."

Reagan said 30% to 45% of his strawberry plants had bloomed, and the freeze probably got 5% to 10% of those Wednesday morning.

"We've got a little damage as does every strawberry farmer around at this point," he said.

Neal said blueberry and blackberry plants that lose their blooms or fruit now will bud again in the fall. Strawberries might bloom for a couple more weeks, he said. Neal said strawberries have been blooming for a month and generally take 30 days from flower to harvest.

Reagan said he still plans to open Saturday for drive-through and "you pick" strawberry customers.

The two acres of bonfire-warmed blueberries at Hatch Farms were in the its "you pick" section, where customers do their picking. Entire families come to the farm to pick blueberries. Some bring a picnic lunch.

Matt and his wife Megan Varoz, who have owned the farm for two years, wanted to be sure to save that section so customers can still enjoy picking their own blueberries this June.

Neal said many Arkansas peaches were damaged by cold weather in February. Those that survived were likely lost in this week's freeze. He said apples and grapes are also sensitive to freezing temperatures.

High temperatures on Sunday are forecast to be in the 70s across Arkansas.