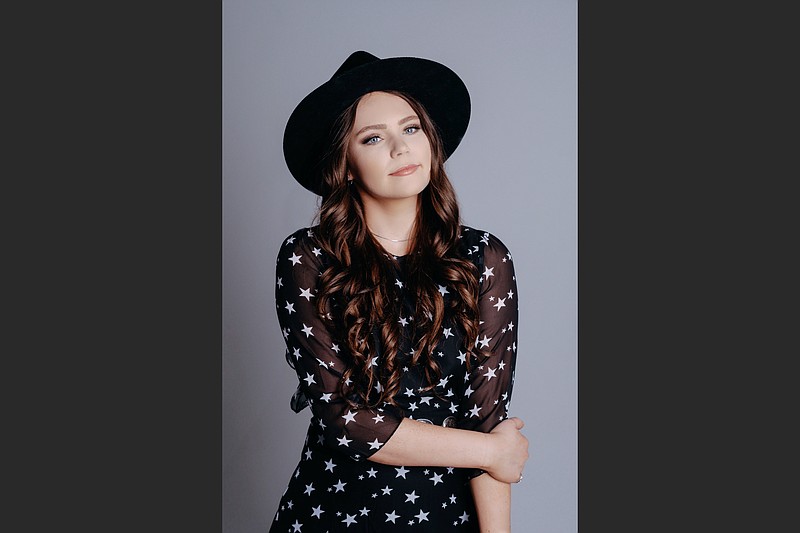 “Treasure” is the witty and funny debut single from El Dorado native Mary Heather Hickman. (Special to the Democrat-Gazette/Heather LeRoy)

"Treasure," the new single from El Dorado native Mary Heather Hickman, is a wildly catchy, tongue-in-cheek takedown of her poor taste in men.

Far from being a broken-hearted lament, "Treasure" — as in "picking up trash and calling it treasure" — is more like a celebration; a big, radio-friendly, '90's-style country anthem with fiddles and steel guitar wrapped around a 21st century sensibility.

Hickman, 25, lived in El Dorado until she moved with her family to Dallas when she was 4. She grew up listening to country music and attended the University of Arkansas, Fayetteville. She played the Arkansas-Oklahoma-Texas circuit with her band, The Sinners, then moved to Nashville, Tenn., in 2018.

"Treasure," which was written around this time last year, picked up momentum after she posted a version of it on TikTok where it racked up over 1 million views practically overnight. It's also getting added to radio playlists, according to her press materials.

Hickman released a few tracks in 2016 but is treating "Treasure" as her debut single.

We caught up with her one afternoon earlier this month on her way back to her Nashville apartment from a songwriting session with "Treasure" co-writer and friend Stefanie Joyce.

This interview has been edited for clarity and length.

So, what's the story behind "Treasure?"

I wrote it with my best friend and frequent co-writer, Stefanie. My dad has a little cabin in Moro Bay and we had taken a couple of days off to drive out there to spend time songwriting away from Nashville. We were drinking margaritas and, at that point, we weren't trying to write a song. We were just talking. I had gone through a breakup and she asked me if I was ready to start dating again. I was like, I don't know if I can be trusted to date. I don't know if I have the best track record of picking people [laughs]. I was just kind of joking, but we thought that would be a cool song so we started saying the most outrageous things — Oh, if he's been in jail, he's just my type. Pretty quickly we had the bare bones of the song finished.

I love some of the couplets. You actually rhyme "county jail" and "wedding veil."

That was definitely the result of us drinking and throwing out crazy lines we thought were funny. We were like, how can we top that? I would say a line that was funny, then she would say one. We were basically trying to one-up each other.

Have you heard from listeners who can identify with the song's premise of falling for these awful dudes?

Yeah. The reason I put it out is because it went viral on TikTok. I got a pretty good response, mostly from women, but there have been a few guys who have said they can relate to it. I've even had a few guys tell me, "I am the trash and I'm starting to realize that."

What was it like to have that sort of instant response on TikTok?

I didn't really have any followers on TikTok. I'd posted a few videos and they have maybe a few hundred views, 1,000 at most. I didn't know if it was something that was going to work for me, but I had some friends who have had some success with it and they told me to see if there was a way to make it work for me that feels authentic.

I sat down on the floor of my apartment and I recorded a quick little clip of "Treasure." I posted it at 8 p.m. Immediately, I was getting a lot of views and comments. By the time I went to bed at 10, we were already up to 100,000 views. Within the next day or two, it reached 1 million and an overwhelming response from people telling me they wanted me to record it so they can jam out to it in their car. I wasn't even planning on recording it or putting it on my EP. I just thought it was this funny song.

When did you record the studio version?

In January in Nashville at Studio West with Tyler Bell, who is from Prairie Grove. He was my dad's fraternity brother at the University of Arkansas. I met with him when I moved here and we've been great friends. He's been in the industry for so long, and when it was time for me to start recording things he seemed like the natural choice. He understands the sound I'm going for as an artist and lets me be involved in that process.

Speaking of your sound, on "Treasure" at least, you have this nice mix of twang and pop.

Yeah. I grew up on traditional country music — Johnny Cash, Willie Nelson, Loretta Lynn — those are my heroes. I love blending traditional sound with modern lyrics. I like a good turn of phrase, to twist words in weird ways, and at the heart and soul of my songs I like to have the things that make country music so great: the steel guitar, the fiddle and all that stuff.

What happens next? Is there an album or an EP on the way?

I've recorded quite a few songs that I'll be releasing for the rest of this year and into next year. I believe the plan is to release a few singles and then roll them into an EP or an album.

Do you get back to Arkansas much?

I do. I go to El Dorado mostly. Both sets of my grandparents still live there. I've also been super lucky to have played there a few times in the past few years. I've been playing at [the annual] MusicFest quite a few years. They were an early supporter of mine.