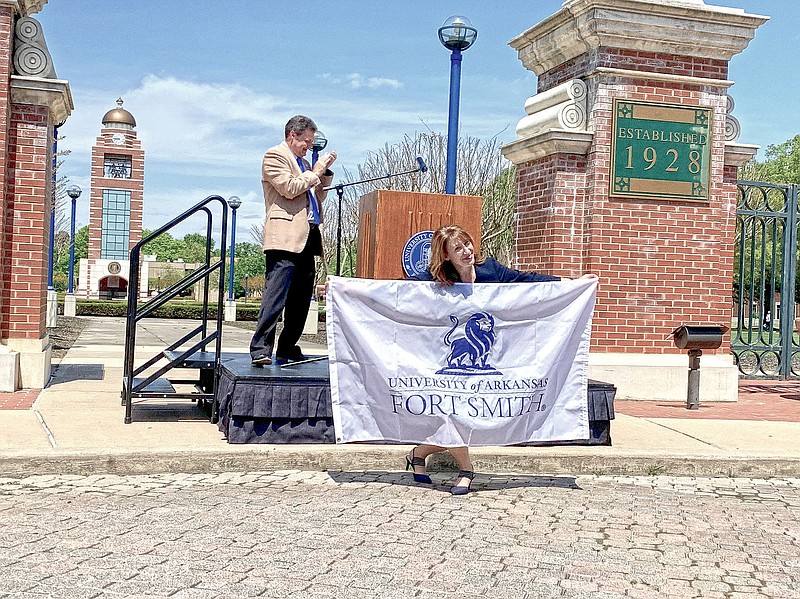 Terisa Riley, chancellor of the University of Arkansas - Fort Smith, displays the new UAFS flag while Chris Kelly, director of marketing and communications for the university, applauds behind her during the launch of the new UAFS brand at the university Wednesday. (NWA Democrat-Gazette/Thomas Saccente)

FORT SMITH -- The University of Arkansas-Fort Smith has changed the way it will market itself.

The university launched its new brand with a special event Wednesday.

The change was the culmination of "more than a year of research, discovery, analysis, and design," according to a university news release. The event concluded with the university raising a flag bearing a new logo.

"The new UAFS logo features a lion with a forward gaze and full mane standing atop a stone foundation with a river of negative space, reminiscent of the river valley that is the university's home," according to the release. "Below the lion is a new alignment of the university name in a bold serif font, the University of Arkansas above, and Fort Smith in large print below, reflecting both the boldness of the institution's place in the University of Arkansas System, and the rich history and unique importance of the city of Fort Smith in its legacy."

Chancellor Terisa Riley said when she came on board in 2019, many people were proud of the university for various reasons. However, these people didn't necessarily have the words to explain what the university does to tell that story more broadly.

"We wanted to be sure people could all tell that story and explain why this is such a special place and what it is that's accomplished here that I think makes us distinctive from any other university in the country," Riley said. "This process helped us to really put into words those things that I think we feel as members of the UAFS pride every single day."

The university is making sure with thw new branding everyone knows what its five new "brand pillars" are and its identity is apparent, according to Riley. These brand pillars, which are named "Thinkers & Doers," "Options & Opportunities," "Empowering," "Rooted in Our Region," and "The Pride of Arkansas," are the fundamental elements of what UAFS will talk about and which represent the university.

Riley said this all is being done so when messaging takes place on campus, be it in the form of advertisement or a speech, the university is emphasizing the same things and telling the same story.

Riley said this can be very confusing for someone who hasn't been in the field of higher education, such as a prospective student.

"They would like for things to be absolutely the same across these different platforms so that they know all of their opportunities and options, and that it's told in a really clear way, that they know that's a place they could see themselves thriving," Riley said.

UAFS partnered with the Raleigh, N.C.-based branding and marketing agency Vision Point Marketing in August to "refine the university's message, voice, and brand," according to the news release.

It collected stories, thoughts, and opinions from more than 1,200 people, including current UAFS students, alumni, faculty and staff, as well as members of its advisory boards, prospective high school students and others from the River Valley and Northwest Arkansas.

UAFS and Vision Point then worked together to use this research to create the new branding.

Chris Kelly, director of marketing and communications for UAFS, said a brand is more than a logo, an advertising campaign or a catchphrase. He argued a brand, at its most basic level, is another word for character.

"It's who you really are, not who others think you are," Kelly said. "And I think that's an important distinction because character is the sum total of your beliefs, your actions, and ultimately, the person, or in our case the university, you see when you look in the mirror."

Kelly said the rebrand will be the foundation of the university stands for going into the future.

The University of Arkansas-Fort Smith paid $165,865 to the Raleigh, N.C.-based Vision Point Marketing for services pertaining to its rebrand.