What is a ballot initiative and how do they work in Arkansas? 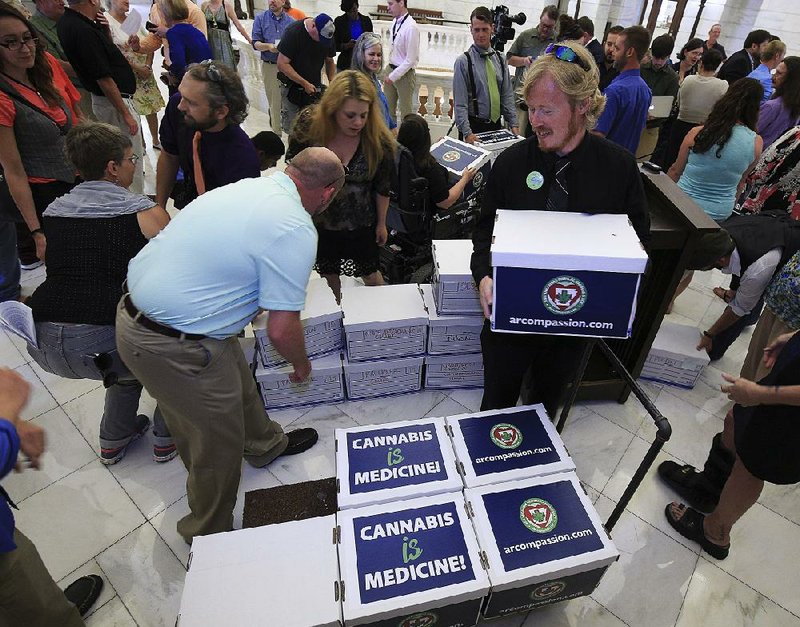 Arkansas Democrat-Gazette/STATON BREIDENTHAL --6/20/16-- Supporters of the ballot initiative to allow medical cannabis load petitions onto a cart Monday at the state Capitol following an Arkansans for Compassionate Care press conference. The group delivered the petitions to the Secretary of State for validation.

Ballot initiatives are proposals written by a person or group with the goal of getting their idea onto the ballot for a direct vote by Arkansans.

Ballot initiatives can take one of three forms:

• Initiated act: a proposal to create a statute

• Referendum: a proposal to overturn a statute passed by the legislature and signed by the governor at the last legislative session

Referendums have a different process for getting onto ballots than acts or constitutional amendments.

For referendums, sponsors must get a number of petition signatures from registered voters that is greater than or equal to 6% of the total number of votes in the last gubernatorial election. Also required is a number of signatures from each of 15 counties equal to at least 3% of votes cast for governor in those jurisdictions.

Then if 10,000 people voted in a given county, sponsors would need to gather at least 300 signatures from that county for it to count as one of the 15.

Signatures for a referendum must be collected within 90 days of the end of the legislative session during which the law in question was passed.

Similar to referendums, sponsors of initiated acts and amendments must seek petition signatures from registered voters.

Once the secretary of state investigates the signatures to ensure their validity, the creators are allowed 30 days to reach the required number of signatures.

Sponsors also submit to the state election commissioners for evaluation the initiative’s legal text, proposed ballot title, and the popular name the initiative will be known by. The initiative can be rejected if the title or name are ruled to be misleading or invalid.

If the signatures, name and title of the initiative are determined to be satisfactory, the measure is put on the ballot for voters to consider.

State law currently requires only a simple majority, more than 50%, of the vote to pass a referendum, initiated act or initiated constitutional amendment.

Successful past ballot initiatives include Amendment 98, which legalized medical marijuana in 2016 with about 56% of the vote, and Amendment 100, which allowed casino gambling in 2018 with 54% of the vote

See the Initiatives and Referenda Handbook from the Secretary of State’s office for additional information.