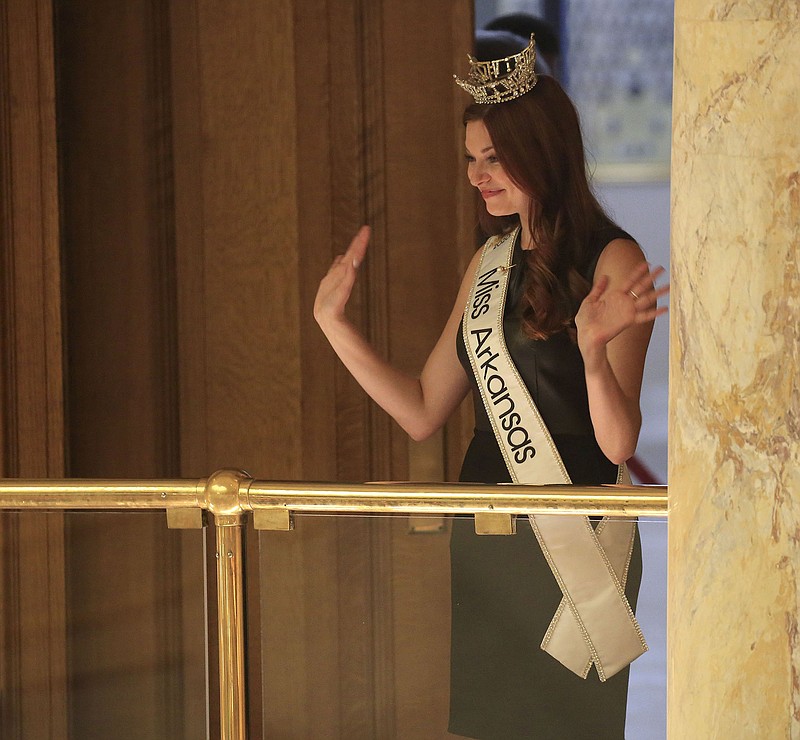 The appropriation for the state Department of Commerce for fiscal 2022 failed to gain the necessary three-fourths vote to pass in the House on Thursday.

The same appropriation took four tries to clear the Senate. Sen. Trent Garner, R-El Dorado, had urged senators to vote against the appropriation, saying he had lost confidence in Commerce Secretary Mike Preston. Garner also has made an unsuccessful push for the Department of Commerce's Arkansas Economic Development Commission to no longer contract with an employee in China.

After concurring with a House amendment, the Senate voted Thursday to send the governor a bill that would prohibit parole for convicted felons who are found guilty of committing another crime while possessing a firearm.

The Senate voted 33-0 to give its final approval to Senate Bill 300 by Sen. Jonathan Dismang, R-Searcy. The bill is aimed at deterring more gun crime in the state.

Rep. Keith Slape, R-Compton, told representatives on Wednesday that the bill is projected to cost the state $254 million over 10 years.

Solomon Graves, secretary of the Department of Corrections, has indicated that if the projections are realized, "we will need additional capacity," department spokeswoman Cindy Murphy said Thursday.

After concurring with a House amendment, the Senate on Thursday voted to give final approval to a bill that would bar state and local governments from requiring face coverings.

The Senate voted 19-9 to approve Senate Bill 590 by Sen. Trent Garner, R-El Dorado, sending the bill to the governor. The Senate's vote fell short of the 24 votes required for the bill's emergency clause.

On March 30, Gov. Asa Hutchinson announced that he was lifting the state's mask mandate.

The Senate on Thursday gave final approval to a bill that requires that canvassers collecting signatures for ballot initiatives be Arkansas residents and prohibits paying canvassers on a per-signature basis.

The Senate voted 27-5 to send Senate Bill 614 by Sen. Breanne Davis, R-Russellville, to the governor after concurring with a House amendment.

The Senate voted Thursday to send to the House a bill that would prohibit state agencies, counties and municipalities from restricting the right of a landowner to perform tree maintenance on the landowners property.

The Senate on Thursday voted to approve a bill that would bar a state entity from teaching, instructing or training any employee, contractor, staff member or any other individual or group to adopt or believe any divisive concepts.

The bill would prohibit any employee of state from facing any penalty or discrimination on the account of his or her refusal to support, believe, endorse, embrace, act upon or otherwise assent to the divisive concepts defined in the bill.

Under the bill, divisive concepts would include concepts that one race or sex in inherently superior to another race, that the state or the United States is fundamentally racist or sexist, or that meritocracy or traits such as a hard work ethic are racist or sexist or were created by a particular race to oppress another race.

The bill wouldn't apply to political subdivisions of the state, public schools, charter schools, colleges and universities, offices of the state's constitutional officers or law enforcement training certified by the Commission on Law Enforcement Standards and Training.

A measure that would allow court records of evictions that are a result of the tenant's financial struggles during the pandemic to be sealed passed in the Arkansas Senate on Thursday.

Senate Bill 476 by Sen. Clarke Tucker, D-Little Rock, would apply to nonpayments of rent because of the pandemic.

SB476 passed the second time the Senate considered it Thursday evening, after Tucker was able to answer some lawmakers' questions about the bill, he said. It passed 20-6, with six lawmakers voting present.

The bill initially failed on a 12-11 vote, with five senators voting present.

The Senate Agriculture Forestry and Economic Development Committee advanced a bill Thursday that would allow people to get approval for medical marijuana cards through telemedicine.

Sen. Greg Leding, D-Fayetteville, sponsor of Senate Bill 703, said people have already been receiving approval for their medical marijuana cards through telemedicine during the pandemic and the bill would "clarify" that into law.

The El Dorado Republican's Senate Bill 615 would ban state agencies from requiring a vaccine passport or proof of vaccination against covid-19.

Garner said the bill would also ban private businesses, such as Walmart, from requiring customers to show proof of vaccination before entry into their stores.

While Rep. Justin Boyd, R-Fort Smith, asked whether the government could place such a restriction on private businesses, Garner responded by likening his bill to civil-rights laws that prohibit businesses from denying entry or service to customers based on race.

Laura Shue, general counsel for the Arkansas Department of Health, spoke against the bill saying it would send the "wrong message" about vaccines.

Gov. Asa Hutchinson also expressed earlier concerns about the idea, saying he would prefer to leave the decision up to private businesses.

The bill passed the Senate on Tuesday and may head to the House floor for further action.

A bill that creates minimum housing standards for renters was passed by the House Thursday.

It would require minimal standards for rental housing such as running water, electricity, a functioning roof and a working heating and cooling system.

Hawks called the bill "Arkansas' first real chance at having a warranty of habitability" and that the bill will take care of "bad actors out there who have been exploiting renters for far too long."