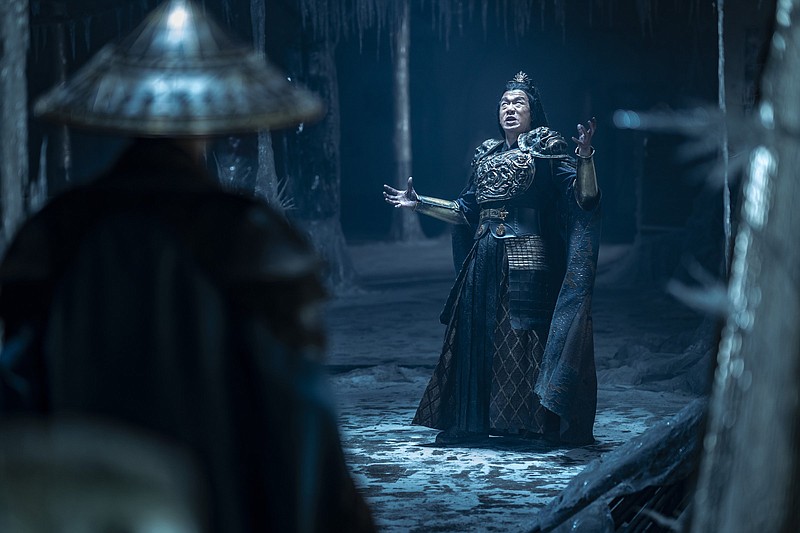 Iconic Singaporean actor Chin Han plays the apparently evil Shang Tsung in “Mortal Kombat.” He understands that the franchise, dormant in the cinemas since 1997, has a very dense mythology.

Here is the official synopsis for the movie "Mortal Kombat," opening theatrically and on the HBO Max streaming service today:

"MMA fighter Cole Young, accustomed to taking a beating for money, is unaware of his heritage -- or why Outworld's Emperor Shang Tsung has sent his best warrior, Sub-Zero, an otherworldly Cryomancer, to hunt Cole down. Fearing for his family's safety, Cole goes in search of Sonya Blade at the direction of Jax, a Special Forces Major who bears the same strange dragon marking Cole was born with.

"Soon he finds himself at the temple of Lord Raiden, an Elder God and the protector of Earthrealm, who grants sanctuary to those who bear the mark. Here, Cole trains with experienced warriors Liu Kang, Kung Lao and rogue mercenary Kano as he prepares to stand with Earth's greatest champions against the enemies of Outworld in a high stakes battle for the universe.

"But will Cole be pushed hard enough to unlock his arcana -- the immense power from within his soul -- in time to save not only his family, but to stop Outworld once and for all?"

Let me try to parse this.

MMA is "mixed martial arts," which means kicking and eye-poking and karate chops in addition to the usual put-up-your-dukes Marquess of Queensberry Rules. Cole Young is one of those dudes.

I don't know what "Outworld" is, or why it has an emperor, but I'm a trained journalist. I can Google:

"Outworld is one of the six main realms in the Mortal Kombat series of fighting games," the first sentence of a long article on the website mortalkombat.fandom.com says. So I guess it's a place, though not necessarily a Southwest Airlines destination.

Its history "goes back millions of years and points at Onaga the Dragon King as its first known ruler. Although he would eventually be supplanted by Shao Kahn, they both shared the same vision: expanding Outworld by taking other realms by force."

Let's assume -- dangerous, I know -- that Shang Tsung has somehow succeeded Shao Kahn. Maybe he's bent on Making Outworld Great Again by adopting some isolationist policies? No more of this taking other realms by force? According to my research, Tsung is a soul-stealing shape-shifting sorcerer from Earthrealm, who apparently was Khan's protege at one time. Earthrealm is probably our reality, Cole Young probably has a data plan.

Now on to Sub-Zero. Right off I'm given to understand there are two iterations of Sub-Zero, that they are brothers, and that the younger brother took up the Sub-Zero mantle after the older brother was killed by Scorpion, whoever that is. Cryomancers "were a race native to Edenia who had the ability to control, shape and manipulate ice." I'm guessing Edenia is another of the six realms. So far we have Outworld, Earthrealm and Edenia in the house.

We know Young has a (presumably human) family, and he's worried for their safety, so he wants to track down this Sonya Blade, a fellow Earthrealmer who "was a member of Earthrealm's Special Forces unit known as Outer World Investigation Agency (OIA)." Right. He's looking for her because Jax, "a cybernetically-enhanced soldier who is the leader of the OIA," told him to.

Jax and Young both have an innate ability to "make dragons," which sounds like a euphemism. We'll just let this go for now.

And here Young trains with "experienced warriors Liu Kang, Kung Lao and rogue mercenary Kano." That Kano gets singled out as "mercenary" is troubling. We already know Young is "accustomed to taking a beating for money," which makes him a professional masochist. Is being a mercenary somehow less honorable?

But now I'm confused: Young is supposed to stand with Earth's greatest champions against "the enemies" of Outworld? I thought it was the mayor of Outworld who'd put a hit out on Young and his family. I thought Outworld was the bad guys. But maybe Earth and Earthrealm aren't the same either.

The universe is at stake now? That escalated quickly.

Forget whether Cole learns to unlock his arcana -- will he ever uncover his dragon-making skills?

I need help. Someone fetch me a 9-year-old.

The Mortal Kombat universe is not any sillier than any other mythology, and if you've been playing the video game and attending to the movies -- the one that comes out today is the third in the series after "Mortal Kombat" (1995) and "Mortal Kombat: Annihilation" (1997) -- you probably didn't have any problem following the official synopsis.

It's fine. It's a movie. A movie movie with (let's hope) verve and bang bang.

We would have reviewed it had the studio made it available before our deadlines. I understand why they didn't.