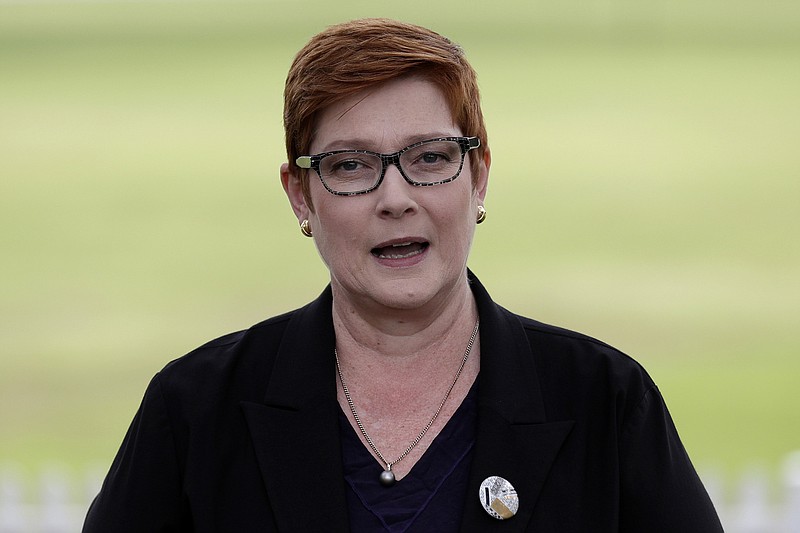 CANBERRA, Australia -- Australia's cancellation of two infrastructure deals with China prompted Beijing on Thursday to accuse its leaders of a "Cold War mentality" and threaten a possible response.

The clash adds to strains in relations that are at a multidecade low after Beijing blocked imports of coal and other goods from Australia in retaliation for its call for an investigation into the origins of the coronavirus pandemic.

The two contracts with Victoria, where the major city of Melbourne is located, were vetoed under a law allowing the government to overrule agreements that violate the national interest, Foreign Minister Marise Payne announced Wednesday.

They were part of Beijing's multibillion-dollar Belt and Road Initiative to expand trade by building ports, railways and other facilities across dozens of countries from the South Pacific through Asia to Europe.

The signing of those agreements in 2018 and 2019 led Australia's parliament to enact the law permitting the national leadership to intervene. It took effect in December.

Payne also announced cancellation of contracts signed by Victoria's Education Department with the governments of Syria in 1999 and Iran in 2004.

The four deals are "inconsistent with Australia's foreign policy or adverse to our foreign relations," Payne said.

The Chinese government criticized the decision, though Payne said Thursday she didn't expect Beijing to retaliate.

"China reserves the right to make a further reaction," Wang said. He gave no details.

"We urge the Australian side to abandon its Cold War mentality" and "not to go further down the wrong path so as to avoid making China-Australia relations, which are already facing serious difficulties, even worse," Wang said.

China blocked imports of Australian coal, beef, wine, lobsters and other goods last year after Australia called for an investigation into the coronavirus, which emerged in central China in late 2019.

Chinese ministers have refused to take calls from their Australian counterparts.

China is Australia's No. 1 foreign market, but the sanctions' impact has been limited, because Chinese steel mills still buy Australian iron ore, the country's most valuable export.

The decision "isn't about any one country," said Payne. "It is most certainly not intended to harm Australia's relationships with any countries."

The opposition leader in Victoria, Michael O'Brien, welcomed the decision.

O'Brien, who belongs to the same conservative Liberal Party as the foreign minister, complained the Victoria government had "given away major infrastructure contracts to Chinese-owned companies."

"In return, the Chinese government has smashed our farmers with tariffs on barley" and "smashed our wine exporters with trade sanctions," O'Brien said.

Observers describe the Victoria deals as vague and nonbinding.

Some suspect their value to China's ruling Communist Party was to exploit disagreements in Australia over Belt and Road deals.

Agreements with China "against our national interests" are "used for propaganda reasons, and we're just not going to allow that to happen," Dutton said.

The vast Chinese steel industry's need for for iron ore is likely to restrain Beijing from taking drastic action, said Fitch Ratings in a report. It said blocking imports would hurt Chinese employment and economic growth.