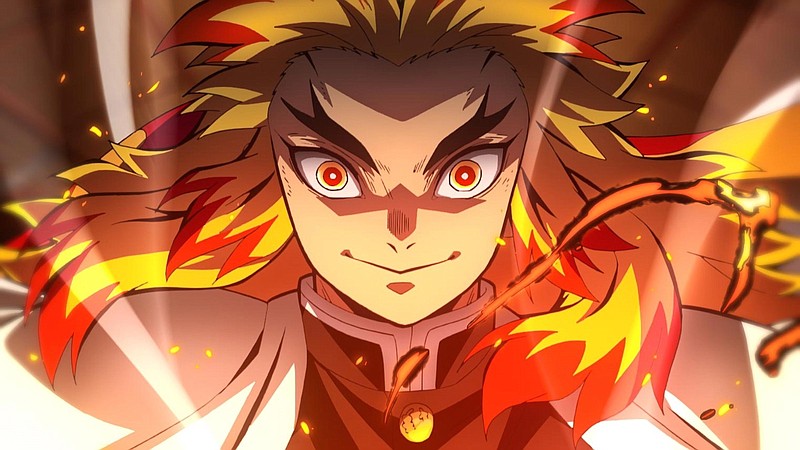 Rengoku Kyojuro (voiced, in English, by Mark Whitten) is a Demon Slayer of the Demon Slayer Corps and the Flame Hashira in “Demon Slayer the Movie: Mugen Train.”

Japanese animation (often just called anime) will always have a soft spot in my heart. I've been watching anime since "Sailor Moon" first came to the U.S. in 1995. Like American animation, it has ups and downs, but anime is far from monolithic.

"Demon Slayer the Movie: Mugen Train " is an anime that, like so many other series, is being adapted from an ongoing Japanese comic (often called manga). The story follows a boy named Tanjiro as he hunts demons and tries to find a cure that will change his demon sister back into a human.

Every few years it'll seem like one anime gets so popular it almost becomes mainstream entertainment, to the point even people who know nothing about Japanese animation will have heard the name. These are shows like "Dragon Ball Z" or "Naruto" or "My Hero Academia."

You know an anime has reached that point when stores like Target and Walmart start carrying merchandise from it -- T-shirts, DVDs and action figures.

I'd say "Demon Slayer" is right on the cusp of hitting that point for American audiences if it hasn't already. My wife and I picked up the series kind of late, waiting until it hit Netflix, but once we started it, we liked it well enough to binge the show to completion. Then I noticed a movie was coming out.

Lots of movies that are adapted from popular anime TV series tend to be what's called "filler." The writers will come up with a story that's largely unrelated to the plot of the TV series or manga. It just gives the main characters a separate adventure to go on. You see this all the time with movies from "Naruto" and "Dragon Ball Z."

It also allows people unfamiliar with the main story to hop in and just casually watch the movie without missing too many puzzle pieces.

"Demon Slayer: Mugen Train" -- opening theatrically today -- is unique in how it picks up the main story directly from the first season finale of the TV series and runs with it. As a fan of the series, I'm fine with that because I typically dislike filler. But it does make this movie difficult to recommend for casual viewers who didn't watch all 26 episodes of the first season.

The TV series is already full of beautiful animation with lots of flowing water whenever Tanjiro swings his sword and very fluid movement for the characters when they're fighting.

But the animation for "Demon Slayer: Mugen Train" takes that stunning level of art and dials it up a few more notches.

Most of the story for this movie is set on a train, and whenever the audience is shown outside shots of the locomotive, it's polished and beautiful. One simple half-second shot of leaves and grass as the train passed by was detailed enough to make me gasp and move forward in my seat. We're talking about a level of lighting and texture that gives Pixar a run for its money.

It's not just the backgrounds that benefit from the animation quality being upgraded from TV series to theatrical film release. The action in "Demon Slayer: Mugen Train" was enough to make my jaw drop multiple times.

The story takes off like an actual train and never ceases to be exciting.

"Demon Slayer" certainly has an oddball sense of humor. While I love following the adventures of Tanjiro and his demon sister Nezuko, the two side characters that tag along with Tanjiro are enough to make me grind my teeth.

I almost quit watching the television series because of Tanjiro's whiny companion, Zenitsu, and his obnoxious companion, Inosuke. Like Tanjiro, they also travel the country slaying demons. But they are so insufferable that they make me want to bang my head on my coffee table. I wish they were written to be less annoying. A friend who has read ahead in the manga promises me they'll get better, but I don't see it happening.

They aren't quite as annoying in this movie, but that's mainly because there's two hours to fill, and the spotlight has to stay on Tanjiro and his superior demon slaying officer, Kyojuro, who is actually fleshed out well in this film.

The story in "Demon Slayer: Mugen Train" feels original. A demon named Enmu hijacks the train, puts everyone to sleep in a hypnotic dream where they're supposed to be very happy and then tries to eat all the passengers.

Tanjiro's dream is the most heart-wrenching because, for the first time in years, he's back with his family, and everyone is alive. (The series kicks off with a demon killing Tanjiro's mother and all his siblings except for Nezuko, who turns into a demon herself).

And, to his credit, Tanjiro's voice actor, Zach Aguilar, does an amazing job portraying the character. When he screamed and cried upon seeing his family alive again, it broke my heart. It was so raw and full of pain.

The voice actors for all the other characters did fine. But it was Aguilar and Mark Whitten (who voiced Kyojuro) who really stood out and moved me with their emotional performances.

While I did enjoy "Demon Slayer: Mugen Train," it has three issues that were big enough I jotted them down in my notes.

First, the villain, Enmu is very bland. He's a demon, so he's bad. And whereas the television series has time to flesh out most of the demons Tanjiro fights and even gives them tragic backstories, Enmu is just a typical villain who wants to kill people because, you know, evil. He also had this really annoying habit of talking to himself and dropping lots of exposition. The fight with Enmu is great, but the character himself could have used some actual development.

Second, while the movie itself never feels dull and is packed with some impressive scenes, the pacing is off. It feels like "Demon Slayer: Mugen Train" probably should have been two movies, one where the characters are on the train and a follow-up that starts when they leave the train.

The film has this false climax because you expect most anime movies to end once the big showdown happens. But "Demon Slayer: Mugen Train" then tacks on another third or so of a movie where a new demon shows up to fight out of nowhere. Zero explanation for his appearance. No idea what his backstory is. He's just there to wreck stuff. And while the fight with this demon is, again, full of action and impressive visuals, it creates a very strange pace for the overall story.

Finally, while I will praise the visuals in this movie from here until Kingdom Come, there's one big problem with the art. Enmu gets this really gross looking CGI worm flesh body, and the train becomes covered in the stuff. It looks bloated, unfinished, and disgusting. It was like somehow a little bit of "Resident Evil" inserted itself into the movie, and it really took me out of the story.

Even with those complaints, I still think "Demon Slayer: Mugen Train" is a great title. It's full of potent action and (mostly) gorgeous visuals. And I'm not the only one who enjoyed it.

It's the highest-grossing film ever in Japan, finally knocking Academy Award-winning "Spirited Away" into the No. 2 slot. Audiences went crazy over "Demon Slayer: Mugen Train," and I can see why. It's a fun movie.

I think what sold me so much on this film was the emotional gut punch at the end. It showed the story had guts to deliver a heavy hit, and it followed through.

Confession: I cried at the end. For the three complaints I had with this film, its ending paid those off in full.

Now because movie theaters often have a weird relationship with anime movies, you can catch "Demon Slayer: Mugen Train" today at some theaters across Arkansas. It'll probably stick around for only a few days, so if you're interested you've got to jump on it. 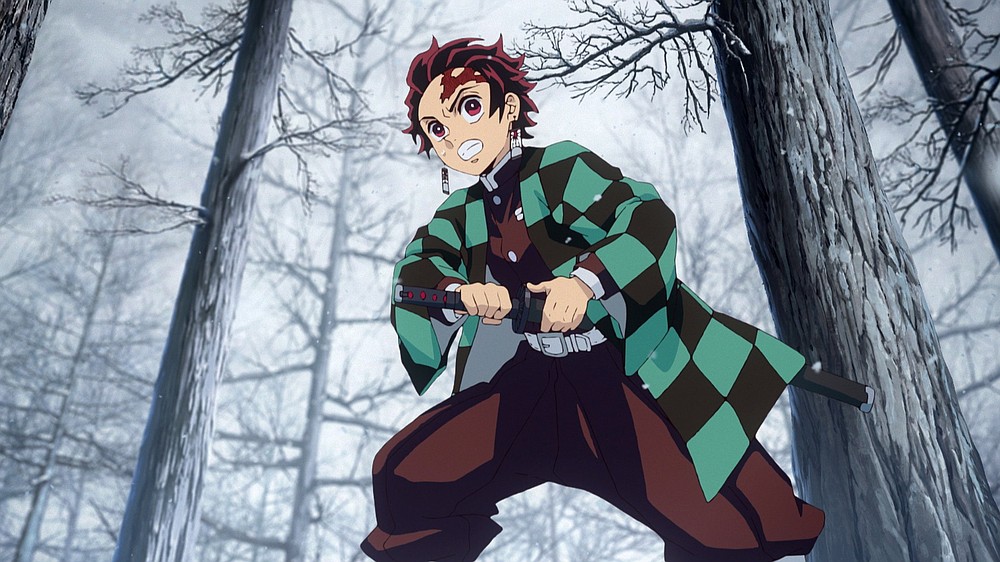 “Demon Slayer the Movie: Mugen Train,” is the most successful film of all time in Japan. This is 13-year-old Tanjiro Kamado (voiced by Zach Aguilar), who is on a quest to restore the humanity of his sister, who was turned into a demon in an attack that wiped out the rest of his family.