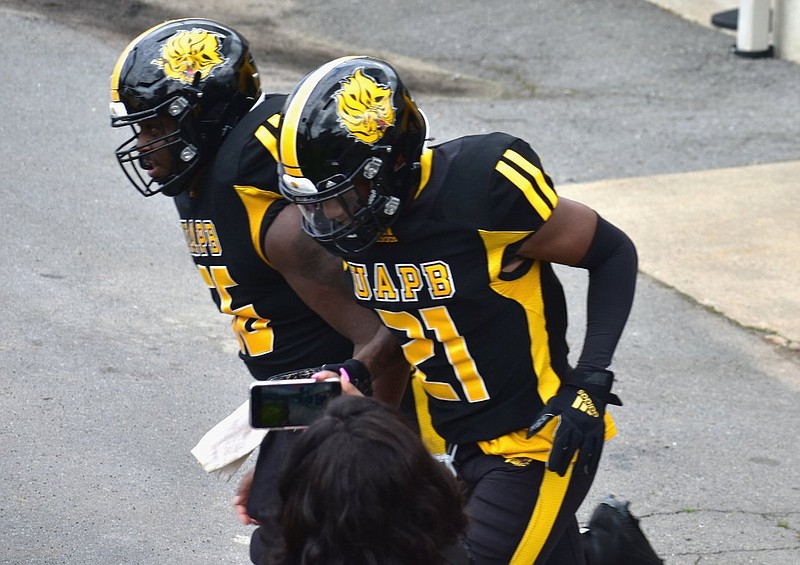 The statistics tell the story of the impact Jalon Thigpen made in 2019 -- 64 tackles, 3.5 of them for losses, seven pass breakups and one interception.

To Thigpen, the impact wasn't enough.

"I don't really want passes defended," the current senior from Laurel, Miss., said. "Most of our passes last year weren't pass deflections. They were dropped picks. We just weren't catching the ball. If the ball is in the air, we've got to own it."

So, Thigpen, who plays the strong safety-linebacker hybrid position known as rover, and the rest of the University of Arkansas at Pine Bluff secondary have done something about it.

The defenders improve their hand-eye coordination catching footballs and tennis balls out of machines. For his part, Thigpen has also gotten smarter about the game.

"It really comes from getting my IQ up more, knowing what the routes are and where the quarterback really wants to go with the ball," he said. "That's just what it's been from JUCO to getting up here. My IQ has gotten way more better, and I've learned more football than I did back then."

All of that has led to Thigpen snagging four of the Golden Lions' seven interceptions this spring.

Thigpen is tied with Decobie Durant of South Carolina State, Keyon Turner of Valparaiso and Chris Edmonds of Samford for the second-most picks in the Football Championship Subdivision. Brandon Barbee of Morehead State leads the nation with five.

"I'm not going to say it's a surprise, because I push myself," said Thigpen, who had never picked off more than one pass in his collegiate career prior to 2021. "I expect myself to do that. I know I'm going to have those chances. I know I'm supposed to have more than that, so I'm really not even satisfied, yet."

Thigpen picked off two passes last Saturday in UAPB's 36-31 win over Prairie View A&M to win the SWAC Western Division championship. He had an interception in each of the first two games this season as well.

He has also "broken up" three passes and totaled 25 tackles through four games.

First-year UAPB Coach Doc Gamble sets a high standard for the backfield -- to catch the ball any time it's in the air.

"The ball is the issue," Gamble said. "Shawn Steele, if you go back to 2019 and all those pass break-ups he had along with those catchable passes, we expect him to catch the football. If the ball is in the air, we have the right to it, so let's go up and catch it ourselves. They've bought into that. It's not good enough to smack the football down."

Steele had three interceptions during an All-SWAC campaign in 2019, but "broke up" a conference-best 18 passes. The senior free safety has a pick and two breakups in this four-game slate.

UAPB's five takeaways, including Thigpen's two picks and another by linebacker Monroe Beard III, against Prairie View are the most in a Golden Lions game since 2015.

Thigpen didn't take long to get adjusted to the pace of Division I football after two years at Southwest Mississippi Community College.

"He's been a guy who's been in the mix since he got here, and now instead of just a guy in the mix, he's the guy along with Shawn Steele," Gamble said. "They've formed a tandem that's second to none. Because we were around Shawn the longest, we knew he was going to be an NFL prospect, and we believe Jalon has played himself into those conversations as well as a next-level guy. But, he's lights-out. He plays tremendously hard and he does it every day in practice. He'll come up and hit you hard. He's been a delight for us, a big-time surprise. Not overly surprised."