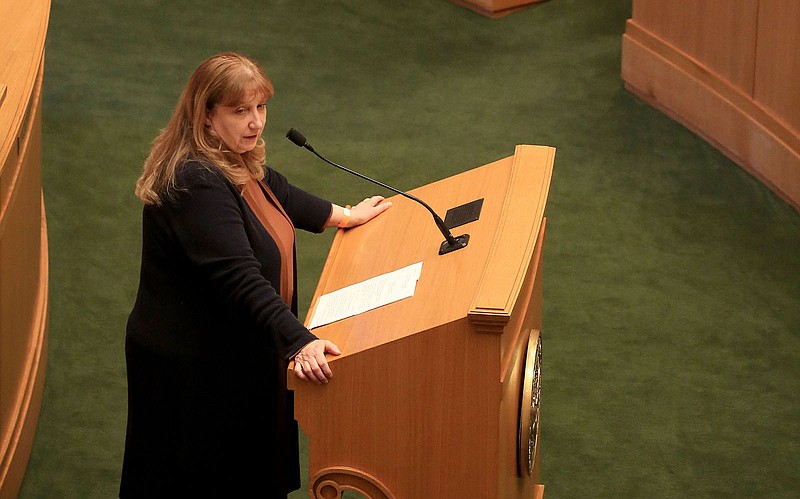 “For me, it’s not a poke in the eye of our current governor, it’s just a way to balance between the executive and the legislative branch,” Rep. Frances Cavenaugh said Thursday in presenting Senate Joint Resolution 10 in the House. (Arkansas Democrat-Gazette/Staton Breidenthal)

The state Senate also approved a third constitutional amendment for the General Assembly to refer to the people in 2022; that measure -- which would bar the government from burdening religious freedom -- now heads to the House for further consideration.

In a 23-6 vote, the Senate approved House Joint Resolution 1005 by Rep. David Ray, R-Maumelle, the proposal to require a 60% vote rather than a majority vote for approval of ballot measures.

The Senate initially voted 22-6 to approve HJR1005 before the Senate expunged the vote at the request of Sen. Bart Hester, R-Cave Springs, who is the Senate sponsor of the measure. Hester asked the Senate to vote again on the measure after he acknowledged to senators that he erred when he told them that the 60% vote requirement would apply only to proposed constitutional amendments but not proposed initiated acts. A majority vote would still be required to approve a referendum on a state law, he said.

Hester said Florida has required a 60% vote for approval of its proposed ballot measures since 2006.

Voters should approve this proposed constitutional amendment for "integrity and protection of our constitution," he said in a text message to the Arkansas Democrat-Gazette.

"We have seen out of state interests fund ballot initiatives that on the surface are good," Hester said. "However, they turn out to be extremely special interest. These special interests control the messaging with the money."

Afterward, Ingram said that he voted against the referral because it raised the vote threshold for both constitutional amendments and initiated acts.

"If it was Constitution only, probably would have supported," Ingram said in a text message to this newspaper.

In other action on Thursday, the House voted to refer to voters a proposed constitutional amendment that would allow the Legislature to call itself into special session.

If approved by voters in 2022, Senate Joint Resolution 10 by Sen. Breanne Davis, R-Russellville, would permit the General Assembly to convene in an extraordinary session by a joint written proclamation of the speaker of the House and the Senate president pro tempore or by the submission of the signatures of two-thirds of the members of the 35-member Senate and the 100-member House.

Lawmakers would be required to state the reason for the special session, and once that purpose is accomplished, the session could be extended by up to 15 days by a two-thirds majority of both chambers.

Under current law, only the governor can call a special session, and the governor sets the agenda for that session.

Rep. Frances Cavenaugh, R-Walnut Ridge, who is the House sponsor of SJR10, told a House committee Thursday morning that the onset of the coronavirus pandemic in 2020 brought up unprecedented issues, and that calling its own special sessions would allow lawmakers to be more responsive to their constituents.

"For me, it's not a poke in the eye of our current governor, it's just a way to balance between the executive and the legislative branch," Cavenaugh said from the House floor Thursday afternoon.

The measure cleared the chamber in an 82-9 vote.

Lawmakers in 36 other states have that authority, and 17 states require signatures from two-thirds of legislators in both chambers to call a special session, according to the National Conference of State Legislatures.

The other 13 states where only the governor can call a special session are Alabama, California, Idaho, Indiana, Kentucky, Michigan, Minnesota, Mississippi, North Dakota, Rhode Island, South Carolina, Texas and Vermont.

Rep. Stephen Meeks, R-Greenbrier, said in committee that SJR10 was already getting attention from media pundits who said it wouldn't get support from the people in the 2022 election.

Cavenaugh said there would be a "grassroots movement" in support of the amendment.

"Every time we pass a bill in the state of Arkansas, there's negative media. That's not something I can control," she said.

Meeks said the measure takes away one of the few checks on legislative power, and asked whether Cavenaugh would still be supportive of the amendment if the Legislature was controlled by Democrats instead of Republicans.

"I don't care what party is in power. They were elected by the constituents in the state of Arkansas," Cavenaugh said. "This gives us equal footing with the executive branch and it is a check and balance."

Rep. Jack Ladyman, R-Jonesboro, said city boards and councils have the power to convene special meetings themselves, and that same power should exist at the state level.

Gov. Asa Hutchinson, whose approval isn't required for proposed constitutional amendments that originate in the Legislature to appear on the ballot, said earlier this week that he did not see a need for a constitutional change dealing with the General Assembly convening.

"In Arkansas our current constitution provides for a part time legislature that meets in General Session once every two years and in fiscal session in the alternating years. I see no need for a change," the Republican governor said in a written statement.

SJR10 passed in the Senate on a 30-2 vote earlier this week.

Thursday evening, the Senate approved a third constitutional amendment for the Legislature to refer to the people in 2022.

Senate Joint Resolution 14 by Sen. Jason Rapert, R-Conway, proposes adding an amendment to the Arkansas Constitution that prohibits the government from burdening a person's freedom of religion unless the government can demonstrate that it furthers a compelling government interest and is the least restrictive means of furthering that interest.

Rapert told senators "we need to make sure we're standing up for religious liberty in our country."

He said the measure adds to the constitution language that is already in statute, though Tucker said there were differences.

The chamber's vote was 27-4, with Democrats Elliott, Leding, Ingram and Tucker dissenting. Dismang and Chesterfield did not vote.