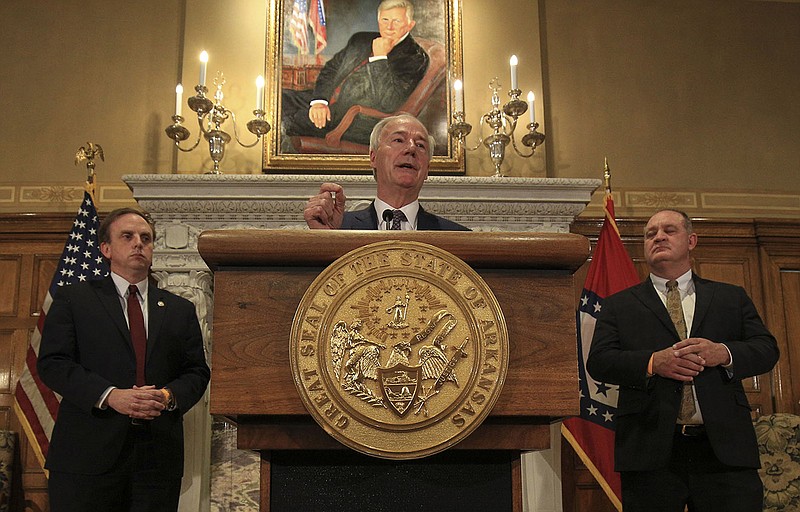 Gov. Asa Hutchinson said Thursday that officials expect to be able to fully fund the state’s proposed $5.84 billion budget in fiscal 2022, a plan that he said is $50 million less than what the state budgeted for in fiscal 2021. With the governor are House Speaker Rep. Matthew Shepherd (left) and Senate President Sen. Jimmy Hickey. More photos at arkansasonline.com/423revenue/. (Arkansas Democrat-Gazette/Staton Breidenthal)

The Arkansas Legislature's Joint Budget Committee on Thursday advanced identical bills that would distribute $5.84 billion in general revenue to state-supported programs in the coming fiscal year, an increase over the current funded budget of $5.68 billion.

Most of the increased revenue in fiscal 2022, which starts July 1, would be distributed under the state's Revenue Stabilization Act to human services programs, public schools, colleges and universities, and correctional programs under Senate Bill 702 and House Bill 1949.

The budget panel endorsed the two identical bills without any discussion or debate. State lawmakers were sent copies of the proposed budget Tuesday night and had previously reviewed a draft.

Gov. Asa Hutchinson said state officials expect to be able to fully fund the proposed fiscal 2022 budget and that it's $50 million less than what the state originally budgeted in fiscal 2021. The forecast for funding that 2021 budget was cut back in anticipation of a recession caused by the coronavirus pandemic.

"We also met our state obligations and our priorities in our state, primarily and mostly importantly in the area of education," the Republican governor said at a news conference in the governor's conference room with House Speaker Matthew Shepherd, R-El Dorado, and Senate President Pro Tempore Jimmy Hickey, R-Texarkana, on each side.

Shepherd said the Legislature met in this regular session in "challenging times with covid-19 and everything else that is going on. But we have come together and I think we have a good proposal in front of the House and the Senate."

The fiscal 2021 budget totaled $5.89 billion. A forecast issued April 2, 2020, anticipated general revenue funding $5.68 billion. The state's net general revenue has exceeded that forecast by more than $500 million so far and at least part of the unfunded budget is expected to be funded in this fiscal year.

Thursday is the 102nd day of this year's regular session and legislative leaders are aiming to wrap up business on Tuesday.

Hutchinson said state officials expect a general revenue surplus of about $600 million at the end of fiscal 2021 and expect similarly strong growth in tax collections in fiscal 2022 as a result of the federal stimulus package.

Officials estimate the state's long-term reserve fund that now has a balance of $209.9 million could increase to $711.1 million, with the help of $448.3 million of the general revenue surplus in fiscal 2021 and $92 million of the surplus accumulated prior to fiscal 2021. Hutchinson has described the reserve fund as the state's long-term savings account.

"This would not have been done without legislative push and a legislative priority by the leadership here," Hutchinson said, noting the state didn't have a long-term reserve fund when he became governor in 2015.

The reserve fund will set the stage to make a case for a better bond rating and gives the state a financial cushion in uncertain times to properly budget for the future, he said.

Senate Democratic leader Keith Ingram of West Memphis said in an interview that "the striking thing is we are going to be able to put more, probably over $700 million, in the long-term reserve fund, and I think that's a good thing.

"A lot of us still believe that this is a false economy" fueled by the federal government's stimulus payments and "there will be a day of reckoning and this is a smart thing to do," he said in an interview.

Sen. Jonathan Dismang, R-Searcy, said in an interview that "our goal was to put everything that we could into long-term reserve," referring to the Senate-led Hickey, who is a retired banker.

"Our goal was to limit the amount of one-time money that was out there that only had to be signed off by one individual. Our goal was to provide more oversight and we accomplished every single one of those," said Dismang, who is a co-chairman of the Joint Budget Committee.

The proposed Revenue Stabilization Act would prioritize the distribution of revenue in Categories A, B, C and D, with A having the highest priority and funded first under HB1949 and SB702.

The revenue forecast for fiscal 2022 would fully fund all four categories, lawmakers and state officials said.

"I think it is a good budget and meets a lot of needs," Ingram said. "It is rare that all the categories A, B, C and D are going to be funded [and] restored the funding that was cut last year to agencies.

"Fiscally, we are doing great," he said. "I worry that some of the things that have been passed that deal with social issues could blunt the growth that we are having."

The tax cut impacts include not collecting $179 million by not levying state income taxes on forgiven loans through the federal Paycheck Protection Program, $3 million from not levying income taxes on unemployment benefits and other tax cuts, Dismang said.

The Department of Human Services' budget would increase by $67 million to $1.78 billion in fiscal 2022.

Colleges and universities would see their current funded budget $717.4 million rise to $762.7 million in fiscal 2022. That includes an increase from the current $574 million to $612 million for four-year institutions.

The allocation to the public school fund would increase from the current $2.23 billion to $2.25 billion.

Hutchinson said the general-revenue budget, coupled with other funding sources, will provide the largest percentage increase in educational adequacy funding since 2006 and includes a special allocation for raising teacher salaries and $3.3 million for the Succeeds Scholarship program.

"I think we are going to wind up cutting a lot of benefits that I don't see any reason to cut because there is money out there for it," he said.

Hutchinson said he plans to call a special session to consider income tax cuts after the Legislature completes redrawing the state's four congressional district boundaries in the fall.

He said the special session will allow the Legislature to concentrate on reducing the individual income tax rate.

"We want to reduce that further," Hutchinson said. "I'll work with our legislative partners and that will be a better time to do it."

Hutchinson said he would like to reduce the top individual income tax of 5.9% to 5%, but "we are not going to be able to get there this fall. But we will be able to make some progress on that."

He said he would like the Legislature in the fall to reduce the top individual income tax rate from 5.9% to 5.7%, but "there is a lot of work between now and then and there is other work in terms of streamlining the process, so it is all going to cost money."

Dismang said the plan for a fall special session to consider tax cuts "is a little bit of a wait and see" to see what the economy looks like as the state pulls out of the coronavirus economy.

"The goal is to focus on income taxes only," he said.

Shepherd said that "I think everything is on the table as far as income tax cuts." 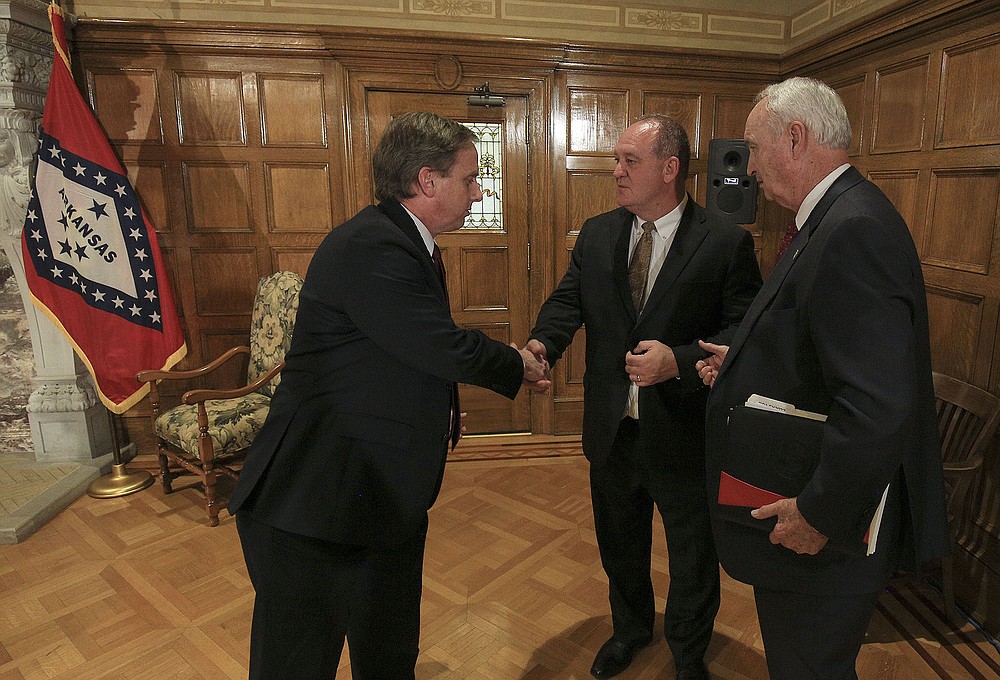 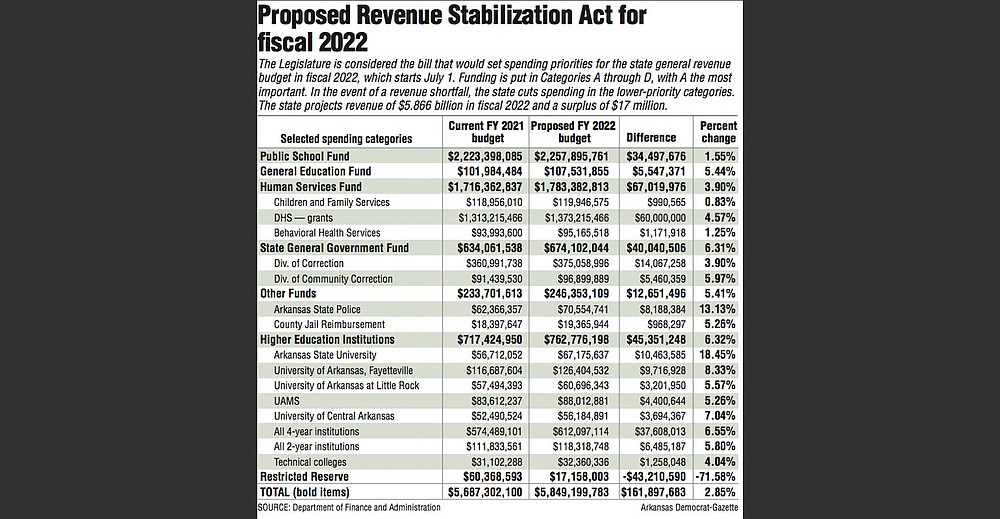