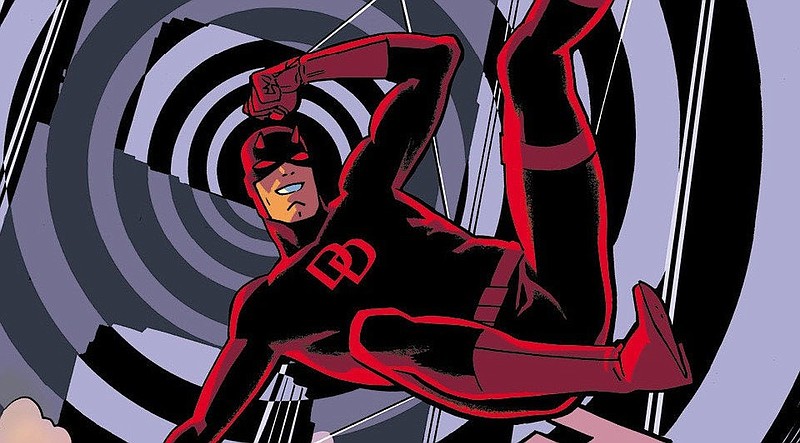 Chris Samnee’s version of Daredevil, as depicted in Marvel Comics.

When I was 13, after having already worked for several years in a comic book store in my upstate New York hometown, my mom bet me $20 that by the time I was 15, I would forsake my love of comics and move on to other, more studious forms of literature. A novelist herself, Ma had something of a stake on my reading tastes becoming more mature, at least she hoped that was the case.

In a way, we were both right: When I turned 15, I collected on the bet (and, God help me, likely spent the winnings on comics), but it turned out, Ma was only off by a few months. By the time I was 16, I had indeed moved on from comics as my primary form of reading to tackle heftier tomes (and devoted much more of my free time to a social life).

After high school, I was out of the comics scene entirely for many years, managing to miss the economic devastation of the industry in the later '80s and '90s, where both DC and Marvel had resorted to catering to the hardcore collector at the expense of everybody else, leading to Marvel's 1996 bankruptcy (yes, a far cry from the entertainment behemoth they have become).

At the end of the '90s, I had sort of returned to the comics form but had shifted toward more mature graphic novels -- less Stan Lee and Chris Claremont and more Adrian Tomine and Chris Ware. I traded the super-capes, cyclic tragic romances, and endless action set-tos, for reflections on the miseries of humanity, and the aching loneliness inside us all (whee!). Occasionally, I might have picked up a Marvel title or two (I was a big fan of "The Ultimates," an Avengers' revamp in 2002 that largely presaged the MCU version of the super team), but still was wrapped up in other stuff, for the most part.

This all changed shortly after my big heart surgery in 2018 -- which left me hyper-emotional and vulnerable -- and, again, after this past pandemic year, when, like everyone else, I was searching for pleasant distractions. I found myself desperate for the recognizable literary comfort food of my youth (as well as the actual comfort food of my youth: bring on the boxed mac & cheese!). I started to dig back into comics, finding out what I had been missing, these past few decades -- turns out, I missed a great deal.

My dabblings involved reading about new characters, along with the re-imaginings of existing ones. I grew up a pretty staunch Marvel fellow, so I instinctively steered clear of DC (which, to be clear, likely also has some amazing stuff from the past twenty years), but did embrace other, smaller publishers when I got the chance (if you don't mind graphic sex and violence, "Saga" is a sprawling sci-fi fantasia from Brian K. Vaughan and Fiona Staples that is absolutely mesmerizing).

After a few years back in the realm of Marvel comics, here are some conclusions I've drawn from the new generation of the form, focusing on various series from the past decade or so that I adored, including what I believe to be the best ever version of my all-time favorite character. This is by no means meant to be comprehensive -- there are undoubtedly all sorts of amazing things I haven't come across yet -- but it's a solid starting point for anyone who either wants to start reading comics or, like me, wanted to get back into them.

Inclusion: When I left comics in the early '80s, there were scant few Marvel superheroes of color -- Luke Cage (who used to make such cringey proclamations as "Sweet Christmas!" to show his surprise), the Black Panther, the Falcon--and fewer female characters of any race (and those that did exist, including "The Invisible Girl" and "Marvel Girl," as befitting their condescending names, had mental telepathy-type powers that were largely marginalized). Shift to the 2010's, and it's a completely new ballgame. When writer Brian Michael Bendis was tasked with re-imagining Spider-Man for Marvel's 'Ultimate' line, he came up with the young Afro-Latinx teen, Miles Morales, hailing not from Queens but Brooklyn, and a sensation was created. Marvel has also brought us its first Muslim super-heroine, Kamala Khan, aka Ms. Marvel, courtesy of writer Sana Amanat and artist G. Willow Wilson, a teen living with her family in North Jersey whose parents come from Pakistan. Meanwhile, the female Captain Marvel has the power of the cosmos behind her; the Black Widow has had a bunch of solo series, as did a former S.H.I.E.L.D. agent turned superheroine, Mockingbird (written by Chelsea Cain and drawn by Kate Niemczyk, an all-female creative team); while Kate Bishop, a young protege of Clint Barton, becomes the new Hawkeye in a wildly popular line written by Kelly Thompson. Meanwhile, LGBTQ+ characters have also been introduced (or revealed), including several well-known characters (Kitty Pryde, Ice Man, Hercules), and a few newer ones (Negasonic Teenage Warhead, Speed, Prodigy). In short, the Marvel universe has gotten vastly more diversified in the last couple of decades, more or less reflecting the era. Not to say there still isn't work to be done, but the domain of superheroes has grown far past a bunch of straight, cishet white men in tights.

Quality: I hate to admit it now, but back in the early '80s my mom had a point: With notable exceptions here and there (Claremont and John Byrne's "X-Men" series remains a high-water mark), the standard monthly superhero comic was pretty bland: a predictable morass of tired art and regurgitated storylines. Recently, I've been embarking on an amazing and much-lauded series of "Thor" comics by Jason Aaron and Russell Dauterman, in which the big fella's longtime earthly love, Jane Foster, her mortal self wracked by cancer, picks up the Thor's fabled Uru hammer, Mjolnir, and becomes the thunder god herself.

In the collection I've been reading, the editors thought to include an old 1978 issue of "What If..." (a comic Marvel started in the late '70s, to posit new possibilities of its indelible characters, a forerunner of their complete alternate storylines) on the same premise. In a difference of about 36 years, the sensibilities, nuances and layered subtexts of the newer series are lightyears away from what Marvel was pumping out back in the day. True, comics are vastly more expensive now than when I was collecting (a quarter back in the day, as compared to a usual cover price of $3.99 an issue), but the quality, from the writing and the art to the paper stock itself, is so superior it almost feels worth it. Even amongst this greatly improved lot, there are still stand-out titles and runs as there always were, but the baseline standard has been considerably raised.

Freedom: Stan Lee, the late, Marvel icon, once famously said of comic storylines, readers only wanted the idea of change, rather than the thing itself. It made sense with a format in which character arcs had to be kept churning for decades, to keep things from radically diverging too much (in this vein, it took Spider-Man's alter ego Peter Parker about 30 monthly issues to graduate high school, and 150 more to get through college). The downside of this is stagnation. You can only have so many clones, and deaths/rebirths, before all the dramatic possibilities seem to have exhausted themselves. This is why both Marvel (with their "Ultimate," "All-New Marvel NOW," "All-New, All Different," and "Fresh Start" lines ) and DC (with their "New 52" and "Rebirth" lines) have tried to finally unbox themselves from these increasingly tight constraints. Some of the more celebrated series runs of the last couple of decades include smaller characters brought to the fore with interesting new takes (the "Blackbolt" series from Saladin Ahmed, Christian Ward, and Frazer Irving), or a long familiar character with an off-beat storyline (the Matt Fraction and David Aja run of "Hawkeye," in which the archer is shown to be a hot mess of a slob, is much-beloved, and not just because of Pizza Dog). Dan Slott and Michael Allred's "Silver Surfer" series from 2014 to 2017 features the Surfer, another Jack Kirby creation previously depicted as a mournful Jesus figure, hooking up with an off-beat young woman named Dawn Greenwood to cruise around the universe, exploring whatever comes their way (the series' joyful tagline: "Anywhere and Everywhere -- Hang on!"). Its infectiously fun vibe, and perfect blend of silliness (the pair travel to one distant planet for the best ice cream in the universe), coupled with Allred's exceptional lines and structural formalism (one remarkable issue deals with the duo involved in a time loop that recreates the experience brilliantly for the readers) makes for a blast of a ride.

Boldness: Along with the aforementioned freedom is the idea of reimagining existing characters through different prisms in which new life can be breathed into already well-worn narratives. For one remarkable run of "Moon Knight" (a small character in the Marvel universe), writer Jeff Lemire transformed the series into a haunting examination of mental health as its hero, a small-time thief named Marc Spector, is beset with multiple personalities all hinging around his possession by the Egyptian god Khonshu.

So fascinating and well-conceived that series was, the character has been granted his own upcoming TV series, set to star Oscar Isaac, for the MCU's Disney+ line up (along with Ms. Marvel). Marvel has also upped its intellectual bona fides with the inclusion of Jonathan Hickman, a writer of complicated depth, who manages to turn his big-ticket titles (including the multi-title "Secret Wars" storyline, and the current line of X-based comics) into deeply complex, intellectually rigorous explorations of worlds and realities that are less about the characters themselves and more the philosophical boundaries of what can possibly constitute a superhero comic.

Fun: Many of the title runs I've mentioned above are exhilarating, especially for longtime readers who were used to the old-school form, but for this rabid "Daredevil" devotee -- he's been my favorite character since I was about 10 -- the magical run of issues from Mark Waid and the immortal Chris Samnee, from 2011 to 2015, has become my favorite comic series of all-time.

Similarly to how Slott and Allred loosened up the mournful Silver Surfer, Waid and Samnee's blind attorney Matt Murdock, after decades existing as one of the most battered and emotionally scarred characters in the Marvel Universe, decides to turn over a new leaf and embrace the joyfulness in his life. With Waid's uncanny ability to unlock the potential in the character -- including his supersenses, which in Waid's hands become so inventively powerful that you long for them yourself -- and Samnee's wonderfully effervescent, looping lines, the character is transformed from a guilt-ridden Catholic wretch into a fun-loving, life-living mensch, even as his most notorious foes gather to defeat him. If there were a legal way to marry a comic-book series (Utah?), for this title I would gladly step to the altar. 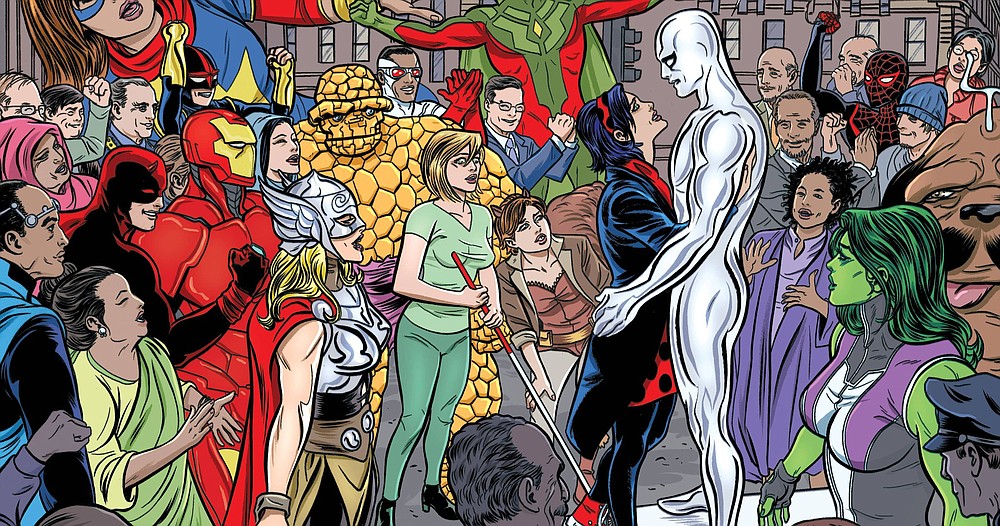 One of Michael Allred’s panels for Marvel’s Silver Surfer comics. 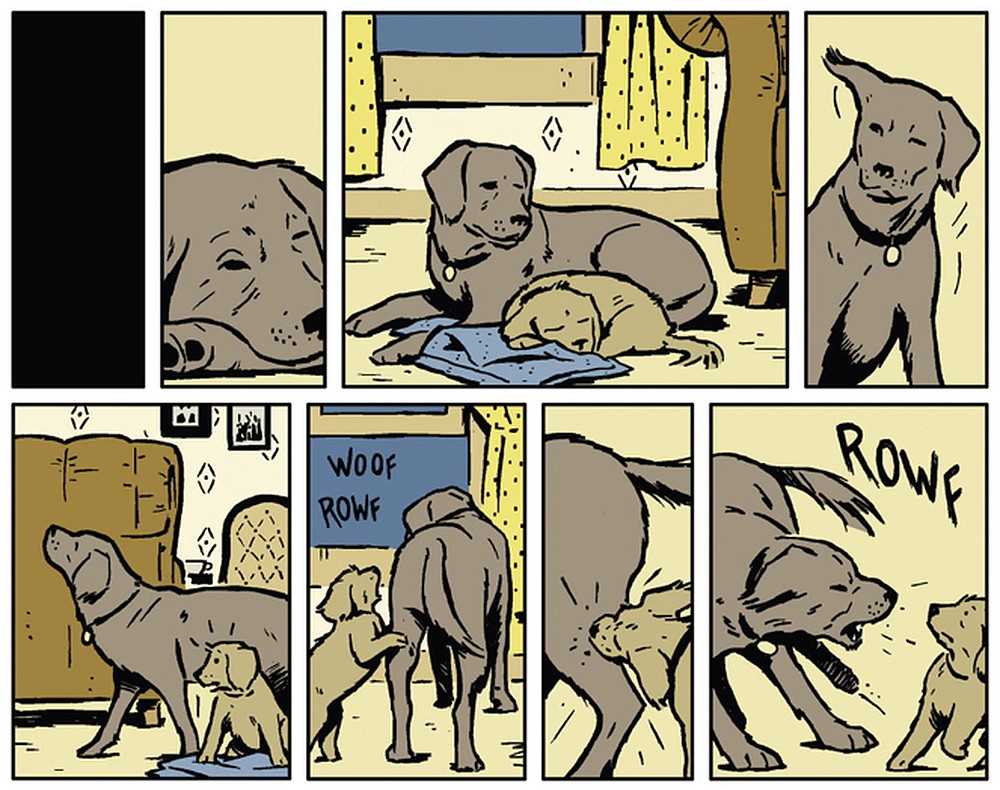