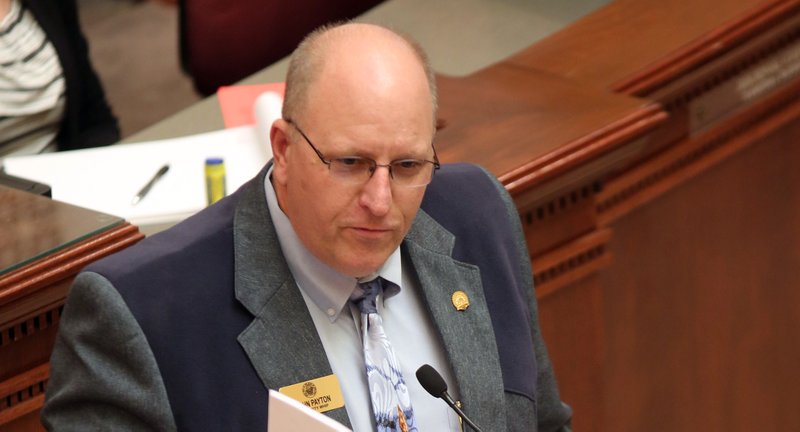 Rep. John Payton, R-Wilburn, is shown in this file photo.

The Arkansas Senate on Thursday voted to send the governor a handful of tax-cut measures, including a bill that would reduce the sales tax on used vehicles priced $4,000 to $10,000 from 6.5% to 3.5%.

In other action on Thursday, the House voted to send the governor a measure extending the sales-tax holiday to include electronic devices.

The Senate voted Thursday night for House Bill 1912 by Rep. John Payton, R-Wilburn, which would reduce the sales tax rate by 3% on used vehicles, trailers and semitrailers priced between $4,000 and $10,000.

The bill embodies Republican Gov. Asa Hutchinson's plan to reduce the tax rate on these vehicles. Payton has described it as a compromise with the Senate.

HB1912 is projected by the state Department of Finance and Administration to reduce state sales tax revenue by $6.5 million in fiscal 2022, which begins July 1, and $13.1 million in fiscal 2023. The bill would become effective Jan. 1. It wouldn't affect collections of city and county sales taxes, according to the finance department.

The Senate also voted on Thursday to send the governor:

• HB 1456 by Rep. Jeff Wardlaw, R-Hermitage, which would create an income tax credit for a railroad for track maintenance and modernization. The credit would be equal to 50% of track maintenance expenditures, according to the finance department.

• HB1157 by Rep. David Tollett, R-Lexa, which would increase an income tax deduction from $250 to $500 per taxpayer for qualified classroom investment expenses by a teacher. The bill is projected to reduce general revenue by $237,000 in fiscal 2022.

In a 93-0 vote on Thursday, the House approved Senate Bill 181 by Sen. Trent Garner, R-El Dorado, which would expand the sales tax holiday to include electronic devices, effective July 1.