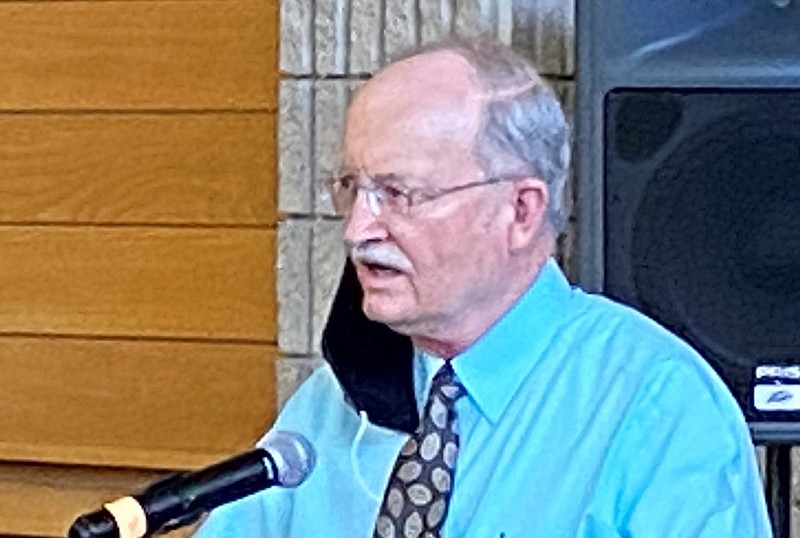 Bob Stark, an agricultural economics professor at the University of Arkansas at Monticello, is shown at a recent reception to honor retiring faculty members in this undated photo. (Special to The Commercial)

After nearly a quarter-century of teaching agriculture business and policy, one of the University of Arkansas at Monticello's storied agriculture professors is stepping down.

In recognition of his 24 years of service, on April 20, Bob Stark, along with other retiring faculty members, Richard Clubb, Farrok Abedi and the late Ted Hammett, was honored with a brief reception by UAM faculty, staff and family.

Stark, an agricultural economics professor, announced that June 30 will be his last day. Stark came to UAM in August 1996.

His extension and research efforts have included soybeans and corn, where he publishes weekly Arkansas Market Reports. He has compiled data and written the economics section of the Arkansas Soybean Research Verification Program annual report for the past 17 years.

In a letter he shared with staff and faculty, Stark said, "My decision was not easy to make because I love teaching and extension. More directly, I love working with each of you and will miss sharing the joys of your future accomplishments -- individual, as a college, and as a university."

During his tenure, Stark has also conducted studies in fresh market heirloom tomato production economics and marketing and various aspects of beef cattle economics. Stark has served the Tri-State Soybean Forum, a nonprofit soybean association with members in Arkansas, Louisiana and Mississippi, as secretary/treasurer since 2004.

Stark has received multiple recognitions over his career, including a 2004 Teaching Award of Merit from the North American Colleges and Teachers of Agriculture; 2019 Faculty Excellence in Teaching Award from the UAM College of Forestry, Agriculture and Natural Resources; 2017 Service Award from the Tri-State Soybean Forum;, and the 2016 John W. White Outstanding Team and Extension Excellence Unit Team Awards from the University of Arkansas System Division of Agriculture for his work on the Crop Sciences Blog.

Stark has been recognized multiple times as a UAM Outstanding Academic Advisor.

"As Professor Emeritus, I intend to keep an office for the immediate future, if possible, while I conduct studies of some soybean and corn economic issues. I have had these interests for many years but never found the time to adequately pursue them in depth," said Stark.

Stark and his wife, Teresa, met and married during graduate school. They have two married children and four grandchildren who all live in Arkansas.

Lon Tegels is with the UAM College of Forestry, Agriculture and Natural Resources.