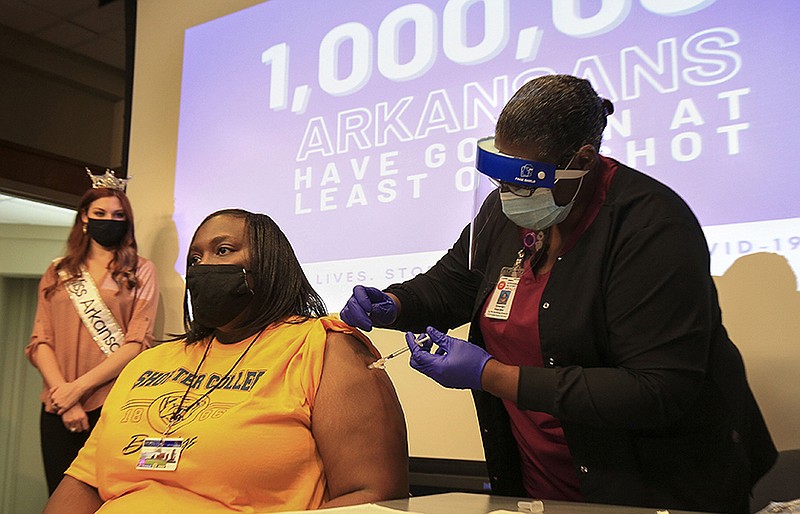 In an attempt to reduce the inventory of coronavirus vaccine doses that have piled up at pharmacies and hospitals, Arkansas for the first time is ordering significantly less than its weekly allocation from the federal government, a state official said Thursday.

"We have gotten to a point where we're not using all of the vaccine we're ordering every week, so we will not be ordering our full allocation this coming week," state Epidemiologist Jennifer Dillaha said.

The decision was made even as Gov. Asa Hutchinson celebrated the state passing the 1 million mark for the number of Arkansans who had received at least one vaccine dose. He urged others to get the shots.

The governor said a "report card" from the U.S. Centers for Disease Control and Prevention showed that Arkansas is performing well in the ordering, administration and equitable distribution of vaccines.

"Where we're weak is that we're starting to build up the inventory, and that is because we've ordered well, we have the supply here, but the demand is slackening off," Hutchinson said.

"We're working with our pharmacy partners, our medical providers, to really reach out, but we need everyone to participate in increasing that demand and getting the shot."

At a news conference at the Department of Health's headquarters in Little Rock, Sheryl Moore, a student at Shorter College in North Little Rock, became the ceremonial "millionth" person in the state to receive a vaccine dose.

Data from the CDC showed that Arkansas had passed the million mark by Sunday, with the number rising by 8,789, to 1,033,132, on Thursday.

"I'm excited," Moore, 38, said after receiving her first dose of Pfizer vaccine. "I'm glad I did it."

Meanwhile the state count of coronavirus cases rose by 161 -- less than half the size of a spike a day earlier.

The number of people hospitalized in the state with covid-19 fell Thursday for the second day in a row, going from 175 as of Wednesday to 171.

The death toll from the virus, as tracked by the Health Department, rose by three, to 5,711.

Although the amount of Pfizer and Moderna vaccines the state was allocated for next week is the same amount received this week, Dillaha said the state is ordering less than half of next week's allocation.

The Johnson & Johnson vaccine isn't being shipped to Arkansas because of the pause recommended by federal health agencies last week in response to the emergence of a rare blood-clotting disorder in six women who received the shots. The women were in other states.

Dillaha said the decision to order less than the full allocation came after the release to the state on Tuesday of the CDC's "key performance indicators" report.

"It showed that Arkansas was at the top in terms of ordering its full allocation of doses and that we were at the bottom for our inventory, and that we had a lot of unused doses on hand," Dillaha said.

According to portions of the report provided to the Arkansas Democrat-Gazette on Thursday, states received the top score of 1,000 points in the inventory category if they had seven to 10 days of inventory, based on the average number of doses administered each day over a rolling seven-day period.

States with 21 or more days of supply received a zero, the lowest possible score, which appeared to be Arkansas' score.

[Video not showing up above? Click here to watch » https://www.youtube.com/watch?v=Kbg77NMHsBs]

Health Department figures showed that average number of doses administered over a rolling seven-day period fell to about 17,320 -- dropping below 18,000 for the first time since the week ending March 24.

Arkansas appeared to receive a perfect or near-perfect score in the "ordering" category, which was based on how much of its allocation a state had been ordering.

But it scored below the region and country as a whole in "administration," which was based on a comparison between the number of doses that had been delivered and the number that had been administered.

Is scored near the top in "equity," which was based on the number of vaccines administered in certain ZIP codes and to people who live in those areas.

Dillaha said some other states had already been ordering less than their full allocations, which made Arkansas' inventory look worse by comparison.

She said it's better to keep the the vaccine in the suppliers' warehouses "until we're ready to use it."

"We have plenty of vaccine in the state already, and it helps us in a sense protect the vaccine because when it's here and being stored somewhere and not used, it's vulnerable to wastage, either temperature excursion or not being used timely so that it expires," Dillaha said.

Any portion of the weekly allocation the state doesn't order in a given week can still be ordered later, she said.

"There have been discussions that some states have higher demand than other states, so at some point there may be a change so that those states that can use the vaccine if it's available can receive it, but that's only been a discussion at this point," Dillaha said.

To get more of the doses administered, the state is working to expand the number of providers who are receiving them.

Within the next couple of weeks, she said, it will send doses to about 230 clinics that participate in a federal program that provides free childhood immunizations.

The Pfizer doses -- the only ones now authorized for children age 16-17 -- will initially be stored at the Health Department's headquarters and delivered to the clinics by members of the Arkansas National Guard.

The state also has been contacting providers who are enrolled in the state covid-19 vaccination program but aren't receiving doses from it. Some are already being supplied through federal programs.

Others "have decided not to receive vaccine because most of their patient population has already been vaccinated, and some enrolled simply to be able to vaccinate their staff, and that's already been taken care of," Dillaha said.

Waddle had initially planned to continue providing initial doses at the clinics for several more weeks. On Thursday, he said he's still planning two more, but after that is "to be determined."

"Anything less than 500, we can do that at another location," he said.

Moore said she had just been looking into getting vaccinated when an administrator at the college called her and asked if she wanted to get her first shot at Thursday's news conference.

"I didn't want to be one of the first ones to do it," Moore said, explaining why she hadn't gotten the vaccine before Thursday.

"I wanted to wait to see how it goes, but I know a lot of people who have gotten it already, and they were fine from it."

Wearing a yellow college T-shirt, she stared straight ahead as Sherian Kwanisai, the Health Department's nursing director for local public health and first person to receive a covid-19 vaccination in Arkansas, stuck the needle in her arm.

"It's not even sore," Moore said afterward. "She did it so quick, I didn't even realize she had done it."

Five others also got their first doses at the event, including Braelond Simmons, program manager for Tendaji Community Development Corp. in Little Rock; Kesha Pilot, who works at Environmental Services Inc. in Little Rock; and Amber Basham, a pediatric nutrition research assistant at Arkansas Children's Hospital.

Simmons, 27, said he'd been waiting to get the shot even though Saint Mark Baptist Church, which houses the community development corporation, has hosted vaccination clinics.

"For me personally I've just been a little hesitant to get it," Simmons said.

One thing that motivated him to get it is his preparation for the start of a Tendaji after-school program. Now that he's had his first shot, he said said he plans to urge his staff to get vaccinated, too.

Pilot, 34, who has a spinal cord injury and uses a wheelchair, said she'd already been taking time off work for doctor's appointments related to a pressure sore, and didn't want to take off more time to get the vaccine.

She said she doesn't get the flu shot and has never had the flu.

"Yet with this particular vaccination it is also scary to me because it is new, and we don't know exactly what's happening," Pilot said. "We don't know what kind of side effects we'll have in the future."

On the other hand, she said a 47-year-old cousin, who she said was healthy and did construction work, died of covid-19 in February, and she worries about how she would handle an infection.

She said she also wants to protect other people, such as her mother and her boss.

"I just tried to look at this as more of instead of the flu shot, something more like polio [vaccination], and then that made me feel better about it," she said.

Basham, 36, said her employer offered vaccinations a while ago, but "there were a lot of other people I felt needed them, and I'm in pretty good health."

She decided to get her first shot Thursday after an invitation from her pastor.

"I have a lot of friends of mine at the hospital who have already had their vaccines," Basham said. "I've asked a lot of questions. I've done a lot of research on this particular one."

She said the Pfizer vaccine "was a good choice for me after getting the information and getting my questions answered."

The number of Arkansans reported by the CDC as having received at least one vaccine dose as of Thursday represented about 34.2% of the state's population.

Among the states and District of Columbia, Arkansas continued to rank 43rd in the percentage of its population who had received at least one vaccine dose and 46th in the percentage who had been fully vaccinated.

Dillaha said the smaller increase in cases on Thursday was "a relief" following Wednesday's rise of 352.

"I'm hoping that yesterday was just an extraordinary day, and it's not going to be part of a trend," Dillaha said.

The number of patients on ventilators fell Thursday by two, to 22. The number in intensive care as of 2 p.m., however, rose by one, to 67.

The cases that were added included 108 that were confirmed through polymerase chain reaction, or PCR, tests.

The other 53 were "probable" cases, which include those identified through less-sensitive antigen tests.

The number of cases that were considered active fell by 20, to 1,923, as recoveries outpaced new cases.

Pulaski County had the most new cases, 22, followed by Benton County, which had 13, and Craighead and Faulkner counties, which each had nine.

Among prison and jail inmates, the Health Department's count of cases rose by two.

The state death toll rose by three, to 4,535, among confirmed cases and remained at 1,176 among probable cases.

Among nursing home and assisted-living facility residents, the count of virus deaths remained at 2,071.

The number of state virus patients who have ever been on a ventilator rose by two, to 1,610.