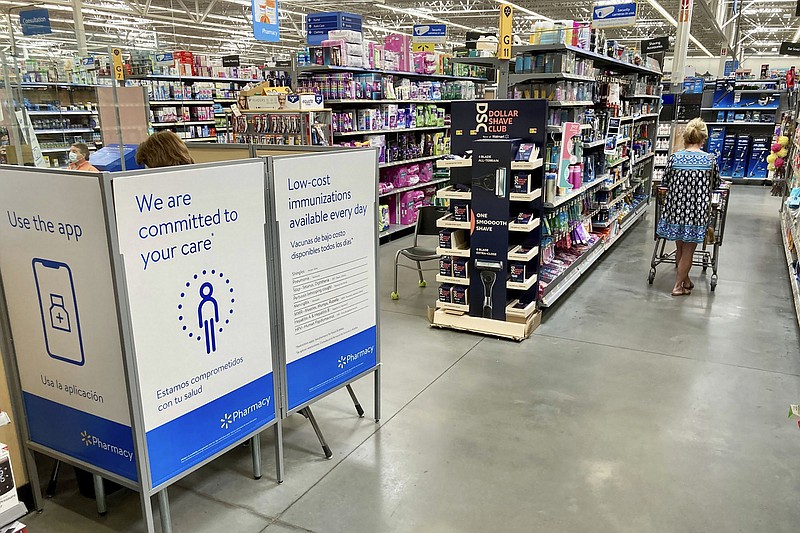 A worker (left) gives a covid-19 vaccination inside a cubicle while a woman shops at a Walmart store in Haleyville, Ala., earlier this month. (AP/Jay Reeves)

Shoppers who use Walmart Inc.'s e-commerce site are more price-conscious than the average online shopper, largely because of pandemic-related financial strain in the past year, recent consumer surveys show.

"American consumers continue to rely on e-commerce and have welcomed digital trends into their purchasing behaviors and buying decisions," according to the latest consumer trends report from Amazon sellers' advisory firm Jungle Scout. Data used in the report covers the first quarter of 2021.

But Walmart customers overall took a bigger economic hit from the coronavirus pandemic, according to the report. Of the 1,000 consumers surveyed, 54% of those who shop at Walmart.com said they lost income or suffered other financial setbacks in 2020, compared with 48% of U.S. consumers overall.

Walmart.com's customer base has continued to grow, however. The Bentonville retailer reported in February that its U.S. e-commerce business grew 79% last year.

"Walmart has built its brand on being the everyday low-price leader in brick and mortar," Black said, "and their ambition to win on price is no different on Walmart.com."

"If their customer wasn't so price conscious, I don't think we would see Walmart.com try to match prices so closely with Amazon," Black said. "Instead, they'd operate more like Target.com who is 10% more expensive on average than Amazon and clearly catering to a less price-conscious consumer."

Black said that both companies are evolving beyond item-by-item price competition. Walmart has introduced its Walmart Plus subscription service and expanded its fulfillment options, he said, while Amazon is "venturing deeper into physical retail."

Carol Spieckerman, a retail consultant and president of Spieckerman Retail, said price is just one of many factors that drive shopper decision-making, but "Walmart's reputation for low prices and its ability to deliver on that promise" present a real advantage.

Spieckerman said, though, that "to compete on price alone would be short-sighted given that convenience, speed, quality, brand selection and any number of other factors can impact shopper decision-making at any time."

Jungle Scout's data shows that many Walmart.com shoppers are also Amazon shoppers. For instance, 77% of consumers who shop at Walmart.com said they also have Amazon Prime memberships.

Among those who shopped on Amazon in the first quarter, 37% also are Walmart Plus members. Only half of Walmart's online shoppers said they have joined Walmart Plus, which the retailer started just over six months ago.

Spieckerman said Jungle Scout's study "validates that e-commerce isn't a zero sum game; that Walmart and Amazon are clearly the main players; and that fluctuating shopper needs drive the business."

The ongoing battle for market share between Walmart.com and Amazon will drive volume for both companies as overall e-commerce sales grow, Spieckerman said.

"E-commerce is a comparison-friendly channel that favors Walmart and Amazon since both companies possess deep analytic and dynamic pricing capabilities," Spieckerman said. "Both companies are aggressive and ambitious, yet winner-takes-all isn't a realistic or even desirable goal."

That's because the friction between the two makes both companies better operators, and it's the consumer who wins in the end, she said.

"The two companies are continually expanding capabilities and convenience for shoppers, which has a ripple effect on the entire industry," Spieckerman said. "As Walmart and Amazon raise the bar to compete with one another, other retailers must follow in order to remain competitive."