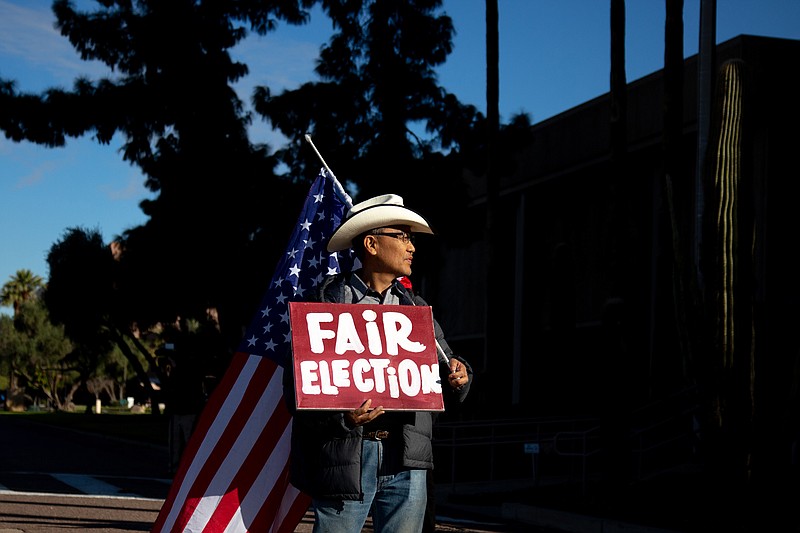 A protester stands outside the State Capitol Executive Tower in Phoenix on Dec. 14, the same day that Arizona's presidential electors met to cast their ballots. MUST CREDIT: Photo for The Washington Post by Courtney Pedroza

An extensive effort to recount ballots from the November election got underway in Phoenix on Friday, as a private vendor hired by Republicans in the Arizona Senate was scheduled to begin reviewing nearly 2.1 million ballots cast in the state's largest county.

The recount of the ballots from Maricopa County was ordered by Republicans in the state Senate to examine unsubstantiated claims that fraud or errors tainted President Joe Biden's win.

Election officials and the courts have found no merit to such allegations, and the GOP-led county board of supervisors has objected to the recount.

Nevertheless, Senate Republicans have forged ahead, exercising a subpoena this week to move voting equipment and ballots from county storage to the floor of the Arizona Veterans Memorial Coliseum, where they have said a team of private companies will spend the next four weeks conducting a hand recount of ballots and a forensic audit of voting machines.

Senate leaders have said the process is intended only to explore ways to improve the state's elections, rather than to cast doubt on Biden's 10,457-vote victory in Arizona over former President Donald Trump.

But the recount has come under sharp criticism from election observers, voting rights advocates and Democrats, who have said it lacks independent oversight and could be used to further baseless claims about the 2020 election.

GOP senators have handed over management and funding of the quasi-public process to a private cybersecurity firm from Florida called Cyber Ninjas, whose chief executive has echoed false claims about fraud in the election.

And allies of Trump have not been shy about their hope that the audit will turn up new ammunition they can use to attack the results of last fall's vote.

"I believe that a proper audit will show that the election results were fraudulent," lawyer Lin Wood, who filed a number of unsuccessful legal challenges to the November election, said in an interview Friday. "I think that's in the best interest of our nation and will hopefully lead to other states also doing proper audits."

The Arizona recount and audit come as Republicans nationally push legislation that would tighten voting rules and as polls show that a majority of GOP voters believe Biden won the election through fraud. Trump, now living at his private club in Florida, continues to insist that the election was stolen, though his loss was confirmed through multiple recounts and dozens of judges rejected challenges to Biden's win.

A livestream of the Arizona audit -- showing footage from nine continuously operated cameras offering different views of the arena where the recount is taking place -- is being provided by One America News, a right-leaning news outlet that has featured claims that the November election was fraudulent.

Trump supporters, including Wood, have been raising private donations to supplement the $150,000 in taxpayer money that Senate leaders agreed to spend for the audit.

On Thursday, the state Democratic Party, joined by the county's only Democratic supervisor, asked a judge to intervene and halt the recount, arguing that it would violate Arizona rules governing the confidentiality and security of ballots and voting equipment.

"The lack of transparency around this 'audit' is astounding and we will not stand idly by as Senate President [Karen] Fann opens up our secure election to unqualified and completely unhinged actors who believe the 'big lie,'" Raquel Teran, chairwoman of the state Democratic Party, said in a statement. "This has gone far enough and we are hopeful that the courts will put an end to this embarrassing and dangerous circus."

Biden's win in Maricopa County was previously confirmed through a number of other reviews, including a hand recount of a sample of ballots conducted jointly by both political parties, as well as a forensic audit conducted by federally accredited labs that was ordered by the county and concluded in February.

The results were certified by a unanimous vote of the five-member county board of supervisors, which includes four Republicans. Republican Gov. Doug Ducey has said he believes the state's November election was a model of integrity.

Information for this article was contributed by Jimmy Magahern of The Washington Post.