Getting what you need without paying a penny 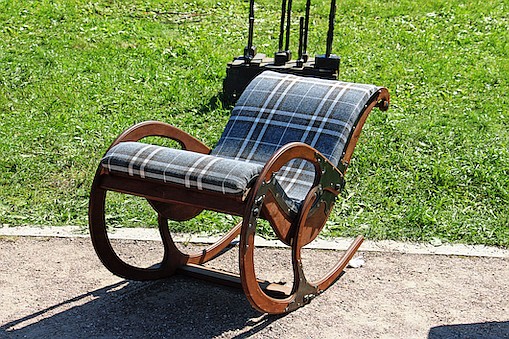 Free to a good home ― Cast off furniture, like this rocking chair, clothing, plant cuttings and equipment loans are some of the millions of items circulating among neighbors all over the world who are taking part in the Buy Nothing Project. (Courtesy of Dreamstime)

“What are you writing about this week?” DC asks, stopping by the door to my home office, where he can bet his front teeth that if it’s Saturday, I am banging out my next column to meet my Sunday deadline.

“Buying nothing,” I say, tapping keys.

My husband and I recently replaced our home’s air conditioning system and eight outdated light fixtures. We are still recovering from our home-improvement hangover, for which the best cure is no spending for six months. So when a reader sent me a link and told me to check out the Buy Nothing Project (buynothingproject.org), I was primed.

A global web of neighborhood Facebook groups where members post stuff they are giving away or need, the Buy Nothing Project works like a giant gift exchange where nothing is expected in return. The aim is to knit together communities, reduce excess consumption and lighten the load on our planet.

Curious to learn more about how this nonbuying spree was going, I called one of the two founders. Liesl Clark lives on Bainbridge Island, a 30-minute ferry ride from Seattle. When her kids were young, she told me, she often took them beachcombing. Her friend Rebecca Rockefeller and her kids went, too.

“We were constantly amazed by how much plastic washed up from the high tide,” she said. “Not just candy wrappers and straws, but car bumpers, garden tools and toys.”

They collected the debris, which the kids used to make art projects that got displayed in their community center and local art museum. But the thought of how much trash lurked in our oceans haunted the women.

All that plastic led to a cathartic, Aha! “We knew the mantra Reduce, Reuse, Recycle,” said Clark, also a documentary filmmaker for National Geographic and Nova. “And we decided to add a fourth R: Refuse.”

Their reasoning went like this: If we all bought less and shared more, we would save money and reduce the amount of waste going to landfills or washing up on our shores.

They started the movement by looking around their own houses. “Our kids were outgrowing their clothing, and we weren’t using many of our household goods, so we thought, ‘Why wouldn’t we spare others in our community another trip to Lowe’s or Wal-Mart?’” Clark said.

They started the first Buy Nothing Facebook group in July 2013. Within hours, several hundred members of their community had joined. Then came requests from others looking to form groups in their cities, and the project went viral.

Today, the Buy Nothing Project, which is all volunteer-run, has nearly 4 million participants in 44 nations, 12,000 volunteers, and printed materials in 16 languages, Clark said. Nearly two-thirds of the groups are in the United States, including one in my community — I was stunned to find — with 830 members, including some of my friends, who are posting everything from baby bibs to bicycles. Just today, kitchen chairs, fiddle leaf fig cuttings and a Roomba vacuum. (I am in a drawing for the Roomba).

How had I not known about this? At times like these, I feel as if I am wearing cement shoes and everyone else has racing flats.

Clearly used to folks like me who are slow to grasp the mind-blowing concept of (gasp!) not shopping, Clark offered a stream of examples: “If someone would like a peppermill, she can post, ‘Hey, does anyone have a spare peppermill before I go buy one?’ Next thing, someone is getting rid of their excess and saving the asker a trip.”

Or, she added, say you’re baking a cake and need a springform pan. Because that’s an item you might only use once a year, maybe you can borrow it instead of buy it. Ask the group.

Then there’s the idea of the community lending library: “How many plastic snake routers to clear clogged drains do we need in one town?” she asks, “or post-hole diggers to build fences?” Her neighborhood has one of each making the rounds.

To start a Facebook group, someone from the community has to go through the Buy Nothing training program and volunteer to administer the group. To join, you need to ask to be admitted, then wait for the administrator to let you in.

In my case, this took a few days. (That background check can be so problematic.) But eventually I passed muster.

Of course, any time you have a concept steeped in goodness, you have abuses. To head those off and to preserve the integrity of these gift economies, Clark and Rockefeller created some rules:

No buying or selling.

No trading or bartering.

Nothing illegal. So no firearms, drugs, prescription medications or expired goods, including car seats or cribs not up to current standards.

No penalties. If you lend something, you have to be OK with the possibility that it might get damaged. (Generally, if that happens, the borrower will fix it, Clark said.)

No double dipping. You can only join one group. To be admitted, you have to live in that community.

Hey, it’s worth a try, if only for the next six months.

Intrigued? Join me next week to hear some of the oddest items given and requested, and to find out what’s next for the Buy Nothing Project.

Marni Jameson is the author of six home and lifestyle books, including “Downsizing the Blended Home — When Two Households Become One.”