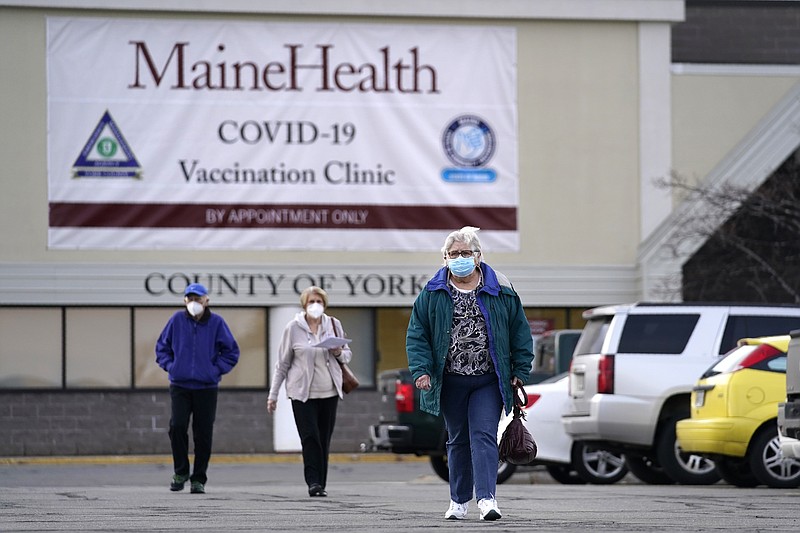 FILE - In this March 3, 2021, file photo, senior citizens leave a covid-19 vaccination site operated by Maine Health in the site of a former department store in Sanford, Maine. Demand for the coronavirus vaccine has fallen off in some places around the U.S., to the point where some counties are turning down new shipments of doses. (AP Photo/Robert F. Bukaty, File)

JACKSON, Miss. -- Louisiana has stopped asking the federal government for its full allotment of covid-19 vaccine. About three-quarters of Kansas counties have turned down new shipments at least once over the past month. And in Mississippi, officials asked the federal government to ship vials in smaller packages so they don't go to waste.

As the supply of coronavirus vaccine doses in the U.S. outpaces demand, some places around the country are finding there's such little interest in the shots that they need to turn down shipments.

"It is kind of stalling. Some people just don't want it," said Stacey Hileman, a nurse with the health department in rural Kansas' Decatur County, where less than a third of the county's 2,900 residents have received a dose.

The dwindling demand for vaccines illustrates the challenge that the U.S. faces in trying to conquer the pandemic while at the same time dealing with the optics of tens of thousands of doses sitting on shelves when countries like India and Brazil are in the midst of full-blown medical emergencies.

More than half of American adults have received at least one vaccine dose, and President Joe Biden this week celebrated eclipsing 200 million doses administered in his first 100 days in office. He also acknowledged entering a new phase to bolster outreach and overcome hesitancy.

Across the country, pharmacists and public health officials are seeing demand wane and supplies build up. About half of Iowa's counties have stopped asking for new doses from the state, and Louisiana didn't seek shipment of some vaccine doses over the past week.

Some are urging federal officials to send more vaccine to places where there's demand -- rather than allocate them based on population -- including Massachusetts Republican Gov. Charlie Baker, who said Thursday that his state could administer two to three times more doses per day if there was more supply.

In Mississippi, small-town pharmacist Robin Jackson has been practically begging anyone in the community to show up and get shots after she received her first shipment of vaccine this month, and demand was weak, despite placing yard signs outside her storefront celebrating the shipment's arrival. She was wasting more vaccine than she was giving out and started coaxing family members into the pharmacy for shots.

In Barber County, Kan., which has turned down doses from the state for two of the past four weeks, Danielle Farr said she has no plans to be vaccinated. The 32-year-old said she got covid-19 last year, along with her 5- and 12-year-old sons and her husband.

Blood tests detected antibodies for the virus in all four of them, so she figures they're already protected.

"I believe in vaccines that have eradicated terrible diseases for the past 60, 70 years. I totally and fully believe in that," said Farr, who works at an accounting firm. "Now a vaccine that was rushed in six, seven months, I'm just going to be a little bit more cautious about what I choose to put into my body."

Barbara Gennaro, a stay-at-home mother of two small children in Yazoo City, Miss., said everybody in her home-schooling community is against getting the vaccine. She said she generally avoids vaccinations for her family, and the coronavirus vaccine is no different.

"All of the strong Christians that I associate with are against it," Gennaro said. "Fear is what drives people to get the vaccine -- plain and simple. The stronger someone's trust is in the Lord, the least likely they are to want the vaccine or feel that it's necessary."

Another challenge for vaccinations in a rural state like Mississippi is that in many cases, doses are being shipped in large packages with one vial containing at least 10 doses.

During a news conference in early April, Republican Gov. Tate Reeves said Mississippi officials have requested that the federal government send the vaccines in smaller packaging so it's not going to waste.

"If you're in New York City, and you're sending a package to one of the large pharmacies in downtown Manhattan, there are literally millions and millions of people within walking distance most likely of that particular pharmacy," Reeves said. "Well, if you're in rural Itta Bena, Miss., that's just not the case."

To combat the hesitancy, Louisiana continues to increase its outreach work with community organizations and faith-based leaders, set up a hotline to help people schedule appointments, and work to find free transportation to a vaccination center. The health department is sending out more than 100,000 mailers Monday to encourage people to get vaccinated, and robocalls from regional medical directors are going out to landlines around the state.

In New Mexico, state officials are exploring the recruitment of "community champions" -- trusted residents of regions with vaccine hesitancy who can address concerns about safety and efficacy. Question-and-answer-style town halls are also a possibility. And video testimonials about vaccines have been recorded.

Nirav Shah, director of the Maine Center for Disease Control and Prevention and president of the Association of State and Territorial Health Officials, said now that everyone qualifies to get vaccinated, public health officials are encountering three groups: "not able," "not now" and "not ever."

The first group, he said, isn't able to get their shots because there's some kind of barrier. The "not nows" have earnest questions about vaccine safety, efficacy and whether they need the shot.

He said they're not prepared to write off "not evers," but instead are "working to find trusted messengers like doctors, family members, community members" to give them good information.

In Wisconsin, Republican Sen. Ron Johnson questioned the need for widespread vaccinations, saying in a radio interview, "What do you care if your neighbor has one or not?"

Johnson, who has no medical expertise or background, made the comments Thursday during an interview with conservative talk radio host Vicki McKenna. Contrary to what medical experts advise, Johnson has said he doesn't need to be vaccinated because he had covid-19 in the fall. And he questioned why anyone would get vaccinated or worry about why others have not.

"For the very young, I see no reason to be pushing vaccines on people," Johnson said. "I certainly am going to vigorously resist any kind of government use or imposing of vaccine passports. ... That could be a very freedom-robbing step, and people need to understand these things."

Johnson's comments come as health officials in the U.S. and around the world urge people to get vaccinated as soon as possible, saying that reaching herd immunity is the best shot at stopping the uncontrolled spread of the virus.

Herd immunity occurs when enough people have been vaccinated or have immunity from natural infection that the virus can't easily spread and the pandemic fizzles out. Nobody knows for sure what the herd immunity threshold is for the coronavirus, but many experts say it's 70% or higher. And the emergence of variants is further complicating the picture.

In Wisconsin, more than 41% of the population has received at least one shot and roughly 30% has been fully vaccinated. But demand for vaccinations has slowed in parts of the U.S. in a worrisome sign.

Johnson, a former plastics manufacturer with a bachelor's degree in business and accounting, said he doesn't think people should feel pressured to get vaccinated.

"The science tells us the vaccines are 95% effective, so if you have a vaccine, quite honestly, what do you care if your neighbor has one or not?" Johnson said. "What is it to you? You've got a vaccine and science is telling you it's very, very effective. So why is this big push to make sure everybody gets a vaccine?

"And it's to the point where you're going to shame people, you're going to force them to carry a card to prove that they've been vaccinated so they can still stay in society. I'm getting highly suspicious of what's happening here."

The interview ended before Johnson explained his suspicions.

On Friday, Johnson issued a statement doubling down on his comments.

"Everyone should have the right to gather information, consult with their doctor and decide for themselves whether to get vaccinated," Johnson said, noting his support for former President Donald Trump's Operation Warp Speed program to quickly develop a vaccine. "Now I believe government's role (and therefore my role) is to help ensure transparency so that people have as much information as possible to make an informed decision for themselves."

Johnson said it was legitimate to question whether people with a low risk of suffering a serious illness from covid-19 should get vaccinated. He again promised to "vigorously oppose" vaccine passports. 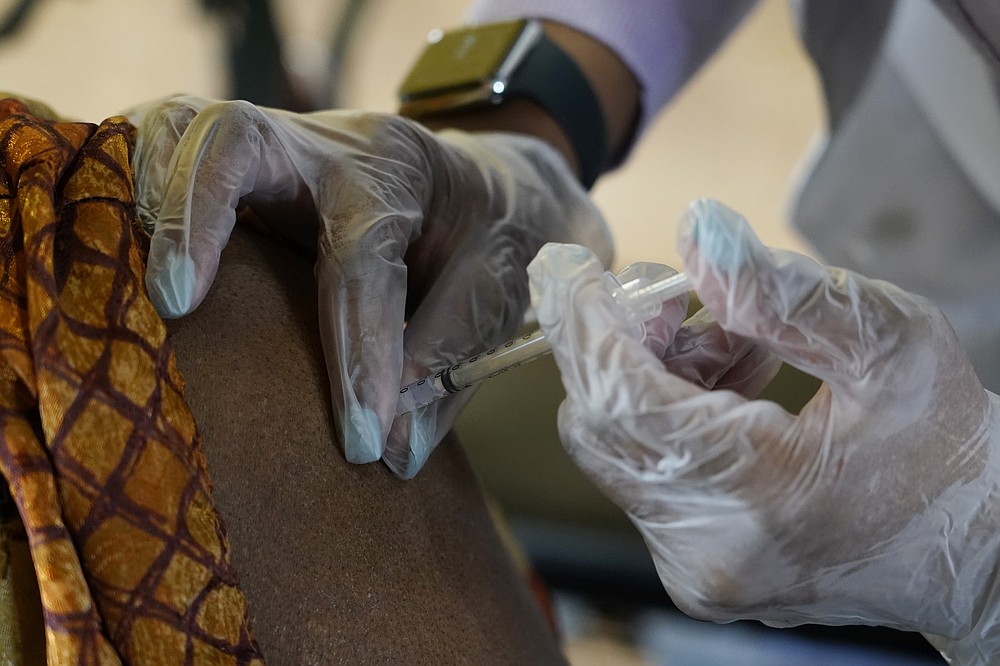 FILE - In this Jan. 12, 2021, file photo, a resident of Harmony Court Assisted Living receives the Pfizer-BioNTech covid-19 vaccine in Jackson, Miss. Demand for the coronavirus vaccine has fallen off in some places around the U.S., to the point where some counties are turning down new shipments of doses. (AP Photo/Rogelio V. Solis, File) 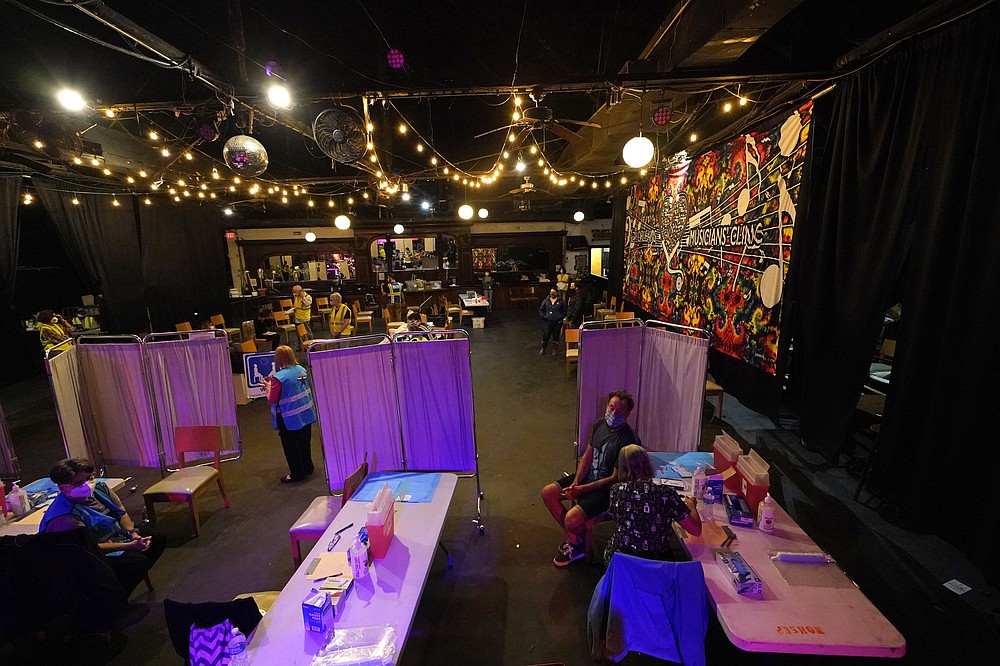 FILE - In this April 13, 2021, file photo, people receive the Moderna covid-19 vaccine during a vaccine event hosted by Nola Ready, where people received a free drink at the bar if they received a covid-19 vaccine, at The Howling Wolf, a music venue and bar, in New Orleans. Demand for the coronavirus vaccine has fallen off in some places around the U.S., to the point where some counties are turning down new shipments of doses. (AP Photo/Gerald Herbert, File) 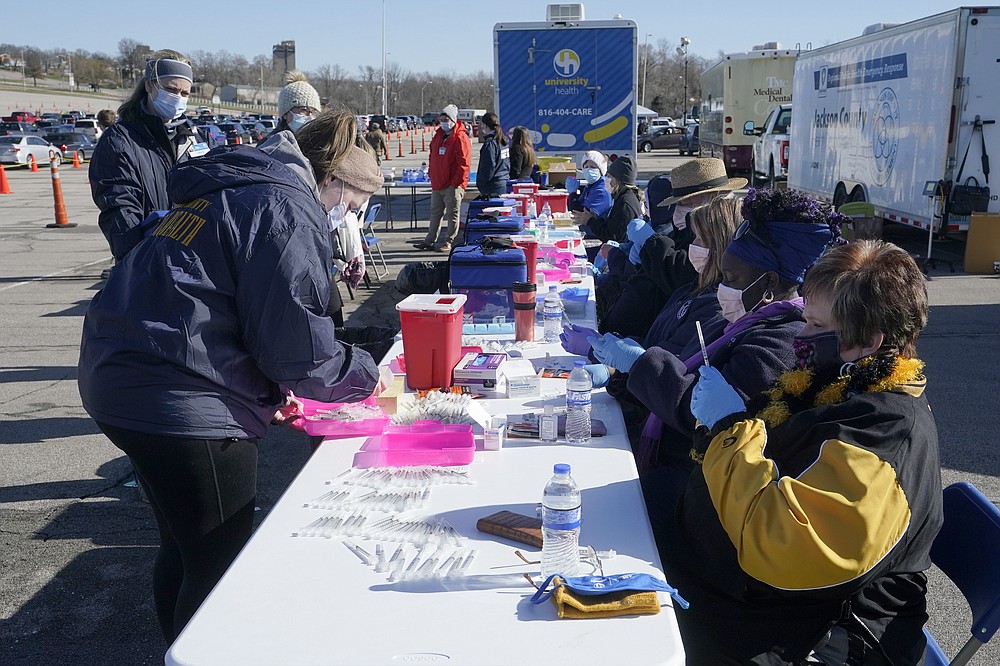 FILE - In this March 19, 2021, file photo, nurses fill syringes with a covid-19 vaccine at a mass vaccination site in Kansas City, Mo. Demand for the coronavirus vaccine has fallen off in some places around the U.S., to the point where some counties are turning down new shipments of doses. (AP Photo/Orlin Wagner, File)
ADVERTISEMENT